Government ads in Queensland — do numbers add up? Back to Queensland today, where it’s just two days into the campaign and one tipster has noticed a sharp upturn in ads from Queensland Health advertising the Newman government’s Wait Time Guarantee policy, set to come into effect on February 1. Our tipster says the ads became more frequent right before the election announcement: “Queenslanders (like me) [are being] battered by incessant television advertisements puffing the Queensland Government attempts at reducing waiting times in public hospitals”. The increase also gave him the chance to question claims such as these ones:

A jump from 60,000 to none in three years seemed a bit far fetched to our tipster, as it does to us, and very convenient for a government seeking re-election. The policy, which says that no Queenslanders will have to wait longer than medically recommended times for elective surgery, was announced in November. We asked Queensland Health how they measure the number of people on waiting lists to see if their claims actually check out, but didn’t hear back by deadline.

Of course, this is just the start of the ads that will bombard the Sunshine State this election and we are looking forward to seeing what political ads and correspondence Queenslanders get, if you see something good you can send it here.

Old faces at the ABC. While David Johnston’s website still says he is minister for defence, a commenter tells us the ABC also needs to let go of political correspondent Mark Simkin:

“The ABC might want to take Mark Simkin out of its promo for is news service — the one that swings across the world, starting with Lisa Millar in the US, then around Australia — Simkin’s voice still says ‘Canberra’ and his face beams from that spot on the map of Oz.”

Google news brings the lols. Since SBS has been regularly publishing some (quite good) political satire articles, Ms Tips has noticed that some readers haven’t quite got the joke, sharing them with sincere outrage at whatever fake news they have interpreted as real. Now we feel just a tiny bit bad for laughing at them, after one reader sent us this screenshot of Google News yesterday, featuring one such article alongside serious news. We asked Google if this is just an unfortunate consequences of their algorithms but did not hear back by deadline. 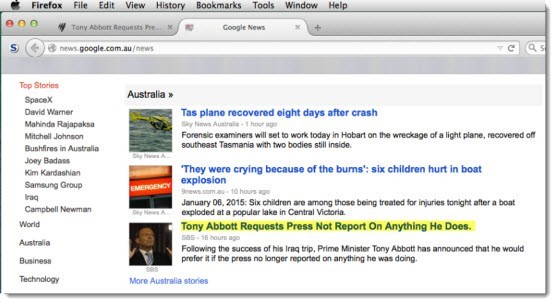 Many positions on yoga. Yesterday we brought you the news that Rajan Zed, a Hindu statesman, had said he supported IP Australia’s decision to pay for yoga for employees. This tipster is not happy with the fuss, revealing how such deals end up in government employee contracts:

“Media beat ups about the public service like ‘shock horror public servants do yoga!’ give me the pip. For some years, under Labor and Coalition governments, public service agencies have had to be creative in enterprise bargaining in order to get agreement from staff while staying within bargaining guidelines set by the APS which are frankly idiotic.
One common strategy has been to provide a ‘healthy lifestyle’ allowance for public servants, usually paid as a reimbursement for actual expenses such as gym membership, quit smoking classes, remedial massage or (faux shock horror) yoga classes. Whatever your opinion of these provisions the fact is that it’s the employees’ money, just as much a part of their remuneration and entitlements as their salary or annual leave. It’s not a rort to receive the agreed remuneration for the job done.

“Several years ago I worked in an agency targeted by one of these beat ups, where a particularly reactionary careerist SES banned staff in the agency from using their better health payment for yoga and massage, notwithstanding that it was their right to use the money as they saw fit, within the guidelines. And all because of a fatuous tabloid beatup. I wonder what the reaction of media and unions would be if private sector rorts such as tearoom supplies, and subsidised Christmas parties were cut every time a lazy journo filed a so- called expose of workers getting their just desserts?”

Dispatches from the US. Our Crikey tipsters are roaming far and wide at the moment, with one giving us an insight into American gun laws and coffee knowledge:

“Just left Texas, where I found this notice on the door of the local water authority. Consulted a local, who said that anyone could ‘open carry’ a gun but ‘concealed carry’ needed a type of license, but admitted they weren’t very hard to get. Am now too terrified to go into a Walmart in case someone’s 2 year old shoots me in the head (as someone’s toddler did in Idaho last week — woman is dead). Came back to New Orleans via the George Bush International Airport in Houston, where they were advertising Flat Whites at Starbucks, but the barista admitted that he didn’t know how to make one (tears of disappointment from me and the daughter).” 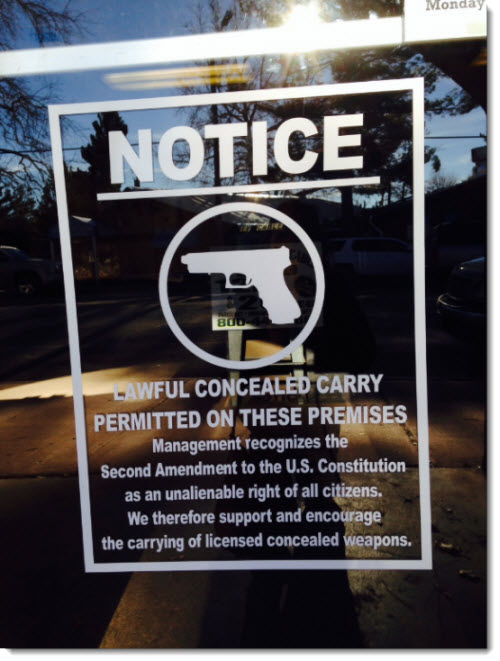 Victorian election invalid? Tipsters say no. Palmer United Party candidate for the Northern Metropolitan Region in  the Legislative Council, Maria Rigoni, has filed in the Supreme Court claiming last year’s Victorian election was invalid, in what seems yet another edition of “obscure PUP candidates say weird things”. What’s the reason for the latest installment? Rigoni believes the Victorian Electoral Commission allowed electors to vote before election day without signing a pre-poll election declaration and without asking why they couldn’t attend a polling booth on election day. We’ve done some digging, and can’t find any mention of a declaration in the Victorian Electoral Act (sections 99 and 101 for those playing at home). Only constituents wanting to cast a postal vote must make a formal application to the commission in writing. According to one early-voting tipster, Rigoni is going to struggle with her action. Our tipster was asked why she was voting early and couldn’t make it to a polling booth on election day and, once she gave one of the reasons on the list, was allowed to vote early. We’re sure Daniel Andrews is breathing easy again now.

Bring back Benaud. Shane Warne’s commentary can ruin even the best test match, but at least he gave us this 90 seconds of astute political analysis to make up for the rest of it: 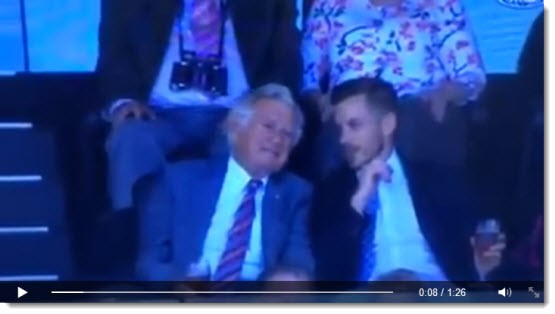 The key word is “overdue”. It does not mean that no one is waiting, it just means that of those that have managed to get on the waiting list, there is none that has waited longer than set down in the standard for that situation.

Thus if there is no set period for dealing with some conditions then none of them is overdue. Easy!

Shane is a lot more interesting than Abbott who has been on both ABC radio and commercial TV commentary today, false laugh and all, yuk!