There is no snare like Foley: anatomy of a Labor coup

NSW Labor's new leader Luke Foley talks the talk but, after all the turmoil of his leadership putsch, will he be able to right Labor's wayward ship? 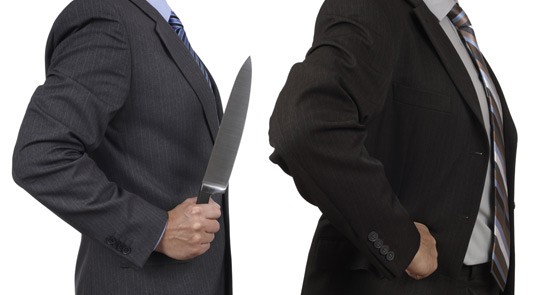 It’s not part of the official Sydney Festival program, but New South Wales voters have been given ringside seats to watch faction bosses of the state Labor party commit the ritual assassination of one leader and then ordain another — the fifth in almost a decade.

On display have been all of the dark arts of back-stabbing and knee-capping which have made the party’s headquarters in Sussex Street a place of legendary intrigue. Past general secretaries Graham Richardson, John Della Bosca, Eric Roozendaal and Mark Arbib finessed the artistry over 40 years of ruthless control. The method was cunning, its execution, textbook:

Step 1: After swearing everlasting allegiance to party leader John Robertson before state Parliament rose on November 20 and setting sail for the state election on March 28, “Robbo” was ambushed on Christmas Eve and forced out of his position.

Step 2: Robertson was told he had “lost the confidence” of unnamed senior party members after it was revealed he had sent an electorate letter in August 2011 in support of Iranian-born gunman Man Haron Monis, the naturalised Australian and police informer responsible for the Lindt Cafe siege in Martin Place, Sydney.

Step 4: Barbara Perry, MP for Auburn since 2001, vacated her safe Labor seat in Western Sydney so that Foley could contest it at the state election in March. (By tradition, Foley needs to move from the upper house to the lower house to become party leader).

Step 5: Nominations close today (Thursday) for the now vacant seat. Foley will be the only candidate. Naturally. If, as expected, he wins the seat, Foley will become Auburn’s eighth MP. Its first in 1927 was Jack Lang, (aka “the Big Fella”) who served two terms as premier (1925-27 and 1930-32).

Step 6: For her selfless abdication from Auburn after 14 years as MP, a cabinet and shadow cabinet minister, Perry will not be forgotten. In the time-honored way of these things, “the party will look after Barbara”.

Step 7: The other contender for the Auburn seat, local councillor Hicham Zraika, is currently in hot water over allegations of branch-stacking. He is said to have 300 delegates and would have easily defeated Perry (or Foley) if a proper preselection ballot had been held. But he, too, has agreed to stand aside and to support Foley. Naturally.

Step 8: Zraika may be offered a seat in the NSW Legislative Council, irreverently nicknamed “the looney lounge”, where backbenchers clear $150,000-a-year.

Step 9: Foley bizarrely promoted election candidate Jodi McKay to his shadow cabinet as planning minister. The former Hunter-region TV news reader isn’t even in parliament yet. It is a media stunt. He is trying to appease Women for Labor; he needs to promote McKay as a replacement for the dumped Perry and help the “ring-in” from Newcastle win Strathfield where she is virtually unknown.

Step 10: Foley gives a public demonstration that he has shifted from the “hard Left” to the Right by endorsing the Coalition’s 2013 privatisation of NSW ports, Botany and Port Kembla, although their sale was never part of Labor’s agenda in government from 1995 to 2011. To emphasise his point of departure from the Left, Foley said he is “not an ideologue” who is opposed to all forms of privatisation.

Step 11: Foley’s current annual parliamentary salary as Opposition Leader in the upper house is $200,385. If he is elected MP for Auburn and officially becomes Opposition Leader at the first Caucus meeting in April, his salary will jump to $273,660. He will be the sole candidate. Naturally.

Meanwhile, Foley has celebrated his arrival as leader with a bout of high-spirited optimism, making the jaw-dropping prediction that Labor might still win the March election. “I can do a lot,” Foley told his first press conference. “Watch this space. I am in this to win it. I’m a big sports fan and I’ve seen more upsets in my time. What I say is, ‘Come along for the ride’.”

However, his bravado is not borne out by internal party reports. They show that campaign donations have dried up as loyal union bureaucrats commit their cash to Bill Shorten’s assault on Team Abbott in 2016 rather than the sideshow in Macquarie Street.

Deep suspicions are also emerging about Sussex Street’s claims to have signed up “thousands” of new members during the September 2013 federal election and afterwards. One sceptic is Rodney Cavalier, a former Wran government minister and author of Power Crisis: The Self-Destruction of a State Labor Party, who wrote last month, “My book on the fall of a NSW Labor Government tracked the death of 101 branches unto 2001. The number now exceeds 150. Few branches, especially in country NSW, can pass a breath-on-the-mirror test. If there was a proper audit of meeting notices, actual attendance and a matrix of activism as complex as twirling a finger, would even 50 branches be certified as alive?”

Before John Robertson was shafted by his cross-factional opponents, he privately argued that if Labor could win 15 seats from the Liberals, it would put the party in a competitive position to fight the next state election in 2019. Foley will have to meet or beat that target if he wants to hold onto the leadership for the next four years.

As an ALP member I’d like to think Alex Mitchell’s assessment is accurate; but I can’t share all of his optimistic views.

lmao, ALP campaigning on a platform of privatization.

Give it a rest, Alex!
I, for one, am bored by your scribbles of Labor BAD, LNP GOOD (by implication!).
I’ll let you in on a secret – there is good and bad in both organisations. The Coalition, both State and Federal, is NOT lily-white as you try to infer.
I don’t live in NSW, but if the Labor Party there have changed leaders, who cares about all this internal muck-raking. It is a done deal, so move on!!

CML, Alex let us off kindly. Nor should you assert YOUR implications are his. YOU may not care about how the NSWALP powerbrokers determine our leaders, but if you had any notion of what’s occurring in NSWALP affairs, you wouldn’t dismiss recent events as mere internal muck raking.

It at least appears possible one can identify a specific address at which NSW ALP parliamentary representation matters are resolved.

Infinitely more difficult is the task of identifying in which corporate boardroom the Tories’ decisions of great import are determined.