Razer: Abbott errs, Bishop shines in the war on pleather

Men can no longer escape the harsh judgement of our intensely visual age. So how well are the boys adjusting to the critical gaze women have endured for so long? 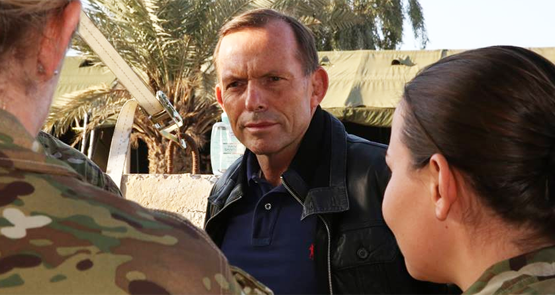 Outside of our threadbare red carpets, there is a national suspicion of men in public life who dress too well. “Looking like you don’t give much of a shit is an Australian badge of honour,” said author Kirstie Clements who, as editor of Vogue for 15 years, is credentialed to make such a claim and assess Tony Abbott’s recent appearance before Australian troops in leather — although Clements can’t be convinced it wasn’t pleather — against it. “Personally, I’d accept the authority of someone who looks schmick,” she said, before a momentary lapse into her own lower-house fantasy ensemble (“Armani pin stripes with heels and a black satin shirt that could take me from question time to a function! FABULOUS”). But, she said, “We Australians are cautious of powerful men who look like they have tried too hard”.

The Guardian wrote that the item recalled a “maths teacher supervising a Year 10 formal” while veteran fashion writer Maggie Alderson snorted when I sent her the image and said, “It’s Putin. Total Putin. I’d say we are about five minutes away from a bare-chested Abbott on horseback”. Clements, in the professional habit of encouraging gambles with style in a risk-averse nation, is a little kinder: “Oh. I think I see what he’s doing. He’s tried for a Belstaff British motorcyclist look. It’s not gone as planned.”

It is, perhaps, worthy of note that male politicians can now be said to try too hard or not hard enough with wardrobe. Of course, we can put a bit of the snark aimed at this regrettable pleather down to simple revenge; many of us remember how the Right hosed Gillard down with a Fashion Police force even Joan Rivers would have tapered and now, it’s Tony’s turn. But, maybe there’s something else going on. Maybe, in an era saturated with visual language, the appearance of male politicians has become more meaningful.

In a world governed by reason, “we’d have no interest in what politicians wear and just in the policies they make,” said Alderson. But, ours is a world governed far less by reason than it is by the primacy of the image, and so it makes a sort of unfortunate sense that the images of power would become just as powerful as the men and women they depict. Almost needless to say, the look of a female politician has long been seen as consonant with her aptitude. The interesting thing now is that women, having long and so intimately known the tyranny of the image, are generally much better at manipulating it.

Male leaders of the past have shown, of course, some keen interest in attire. “All of Churchill’s suits were made to order in Savile Row,” said Alderson, who urges all male leaders, most particularly the front bench of the ALP, to look at what a good tailor can do for even the lumpiest man.

But, Western women politicians already know how to work the parameters of a well-cut suit. It is certainly true, as infamously noted by Germaine Greer, that Gillard remained a stranger to her own silhouette; but many other female politicians have been able — usually with thanks to Armani — to find a mode of dress that sees them trying neither too hard nor not hard enough.

Armani, who famously softened the male suit in the 1980s as he toughened the professional look of women, sat on the shoulders of Condoleezza Rice, Nancy Pelosi and, of course, Julie Bishop, whom Alderson and Clements both agree is “almost perfect” in her choice of political attire. The only criticism they can muster of the minister’s look is that it is sometimes “too groomed” for the Australian electorate. Although, Clements concedes, we’re probably proud to see this kind of polish on a foreign minister. She’s dressed for the Business Class lounge.

“It is female acquaintance with the unreasonable demands of a visual era that have prepared them better in parliament and in the field.”

Despite the jokes about Hillary, all of these women have managed to find what male politicians do so rarely: the contemporary equivalent of a toga. Shorten and Albanese wear boxy off-the-rail suits that recall a fitting by a Pumpkin Patch clerk; honestly, they look like mum has decided they’ll “grow into” their big-boy suits. Hockey and Turnbull, bespoke suits notwithstanding, look like untrustworthy sharps. Bishop’s is one of the few stately silhouettes in the lower house with Penny Wong scoring best-dressed in the upper.

It is female acquaintance with the unreasonable demands of a visual era that have prepared them better in parliament and in the field. The present era’s first and most luminous marriage of policy to style was delivered to us by a woman in what Clements remembers as “The Diana Landmine Scenario”.

Clothes shouldn’t matter in an Angolan minefield but when those clothes are cropped chinos, sleeveless chambray and driving shoes worn by a Patrician blonde who would be seen around the world, they did matter. And they would go on to explicitly inform other female leaders. Clements fondly remembers Quentin Bryce’s outback outfit of glacial white shirt, broad brimmed hat, slim pants and Georg Jensen bracelet watch. This stripped-down look was mastered by former Queensland Premier Anna Bligh whose Brisbane flood emergency attire owes much to the late princess. Contrast her light blue Ready-For-Anything shirt and wheat jeans to the black crepe bottom half of Gillard. The point here is not that Gillard got it wrong but that Bligh proves it can be got spectacularly right. You don’t bother to pause for a photo op in an emergency zone in business pants from Portmans anymore than you put yourself in pleather in Iraq.

Still looking at the photograph of Abbott, Clements says, “he must ask himself on these outdoorsy occasions: What Would Obama Do?”

What Barack Obama has done for fashions in the field of male politics is clear. No Western leader comes close; although Alderson reluctantly concedes “that twerp David Cameron”, known for his £90 barber, runs second. From the crisp, no-nonsense Malcom X shirt-sleeves Obama now prefers for political rallies to the navy Brooks Brothers coat that lends his every emergence from Airforce One a Commander-in-Chief silhouette, the guy gets it right. He’s been getting it right since the 2008 primaries where he followed the power-dressing adage — “Dress for the job you want; not the job you have” — with extraordinary awareness. Obama began his campaign in Ermenegildo Zegna but abandoned the premium Italian brand for identically cut US suits when former French president Nicolas Sarkozy, then newly wed to former model Carla Bruni, was chided for what was seen as a frivolous attachment to couture.

A flip through Obama’s lookbook is a study in statesmanlike apparel. It reveals what a man can wear to conflict zones without stinking, as Abbott did, like the inside of a new Kia. But, a review of what conservatively dressed female leaders, including German Chancellor Angela Merkel and Hillary Clinton, or mildly more daring ones, like Bishop, IMF head Christine Lagarde or UK Home Secretary Theresa May, are wearing is much more broadly instructive.

Having had so much damn practice, women are much better at being looked at. In an age so pitilessly visual, they are now actually looking the best.

Portrayal of women in media is still pants!

A slow day at the office? How silly.

Would be good if Bishop could wear Australian designers. I suspect Gillard has to dress to suit her figure. Isn’t it awful that us women have to talk fashion!

Please stop commenting on ‘fashun’ altogether.
Yawn Yawn Yawn…. Helen, go for a walk, better yet, read a book or two or three.

Bushby, given that there are many people professionally employed to talk fashion within politics, I don’t think it is particularly frivolous or female to talk about it, too.
Whether one likes it or not, stylists impact politicians and the dress of politicians is now widely viewed as a tool in the election arsenal.
You can say “it shouldn’t matter” as much as you want. The fact is, in a visual age, it does. One way to not be fooled by the minutiae of dress is to examine how it is geared and works on us.
We can say as much as we like that we are not suggestible and “above” the impact of a good suit. Churchill, and his tailors who even fitted him for military wear, knew better.
But I guess I just don’t read enough books.

I am with PDGFD1. I don’t give a bugger what they wear.