Is the press brave enough to print Charlie Hebdo's covers? It seems not. And other media tidbits of the day.

Media censors Charlie Hebdo. Following the attack on the offices of the French satirical weekly newspaper, Charlie Hebdo, the Anglosphere media may have made much about “not being afraid” etc etc, but many didn’t follow it up with action. In France, the front pages of today’s papers all feature reproductions of some of Charlie Hebdo’s most full-on covers — revealing, inter alia, that Islam and Islamism was more of a focus of their work than initially realised — while the UK papers have featured … not a single cover. The American TV channels weren’t much better. In an email by CNN senior editorial director Richard Griffiths obtained by POLITICO, reporters were urged to “verbally describe the cartoons in detail” while not showing them. “Avoid close-ups of the cartoons that make them clearly legible.” Major publications and news outlets such as the New York Daily News, the London-based Daily Telegraph and the Associated Press, have pixilated or completely deleted photos of controversial Charlie Hebdo cartoons depicting Mohammed.

For example, from the Telegraph online:

Meanwhile, Berlin’s daily BZ carries a wraparound of some of the most contentious Charlie Hebdo cartoons: 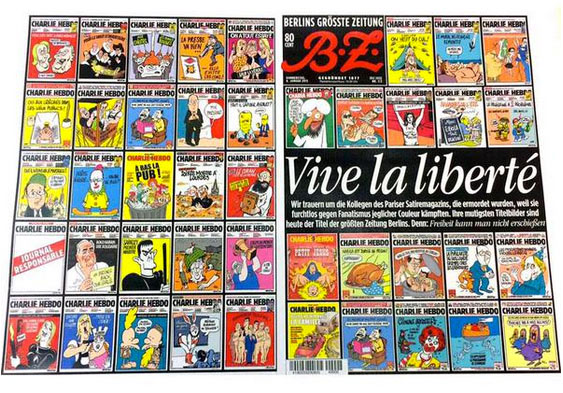 A petition on Change.org has called on journalists around the world to publish the uncensored cartoons of Charlie Hebdo’s ‘La vie de Mahomat’ as “an act of solidarity” to the 12 who lost their lives in this tragedy. — Crikey intern Mahalia Dobson, Guy Rundle and Myriam Robin

High culture part 1. Andrew Bolt shared some holiday reading earlier this week, regaling his readers with a 1,500 word extract of French novelist and essayist Marcel Proust’s A Life. “Yes, I know I should have read this masterpiece decades ago,” the News Corp columnist fond of blasting inner-city elites writes on his blog. Mind you, we think he’s aware of the irony. “I’d have never thought I could be so gripped by a book on memories by a bludger who spends pages even recalling the taste of a madeleine.” — Myriam Robin

High culture part 2. Dear oh dear, should Australian novelists be allowed near a microphone? Here’s Peter Carey in a Q and A from the Grauniad, about his Oz roots, and his (somewhat poorly received) novel Amnesia. “How much time do you spend visiting Melbourne?” a questioner asks, to which Carey replies:

Why the fuck go to the rapidly gentrifying but historically working-class Melbourne suburb of Coburg indeed? How many prizes for join-the-dots novels can it give you? Bet your publisher wasn’t “knowingly” about this interview, Pete. — Crikey contributor

High culture part 3. In what is likely to result in the world’s most esoteric and mystical advice column, Japanese surrealist novelist Haruki Murakami is set to offer “words of wisdom” to his fans in the form of a new advice column. Fans have until the end of the month to send in their life’s woes and dilemmas to the renowned author. Murakami will also answer fans’ questions on his likes and dislikes. — Crikey intern Mahalia Dobson.