Yesterday, young Australian man Myuran Sukumaran received news that he will almost certainly be shot dead by an Indonesian firing squad. The Bali Nine member was sentenced to death in 2005 for attempting to smuggle heroin out of Indonesia. He has exhausted all appeals and his life is now in the hands of Tony Abbott […] 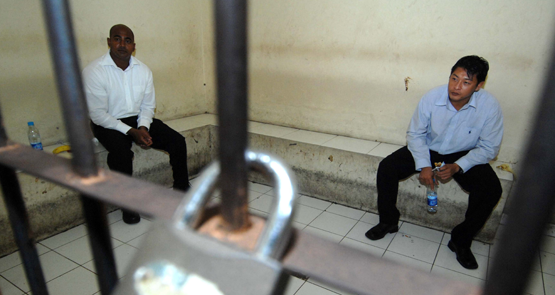 The Bali Nine member was sentenced to death in 2005 for attempting to smuggle heroin out of Indonesia. He has exhausted all appeals and his life is now in the hands of Tony Abbott and Julie Bishop.

If you think Australian officials have no power to influence the Indonesian justice system, think again — and Australians should be appalled at the conduct of successive prime and foreign ministers on this case.

Indeed, it was the Australian Federal Police who tipped off its Indonesian counterparts about the Bali Nine’s activities. It was the AFP again — specifically former AFP chief Mick Keelty, undoubtedly with a heavy conscience — who stepped in to convince an Indonesian court to commute Bali Nine member Scott Rush’s sentence from death to life in prison in 2011.

And then there’s Australia’s role in Schapelle Corby’s release. When Corby’s sentence was cut by five years in 2012, Indonesian officials embarrassed then-foreign minister Bob Carr by announcing the decision was part of a reciprocal arrangement with Australia — a deal had been cut to release young Indonesians being held in our prisons for crewing asylum seeker boats in return for Corby’s early release, they said. Carr vehemently denied it.

So what’s the difference between Rush and Corby, on the one hand, and Sukumaran and fellow Bali Nine member Andrew Chan (also on death row), or indeed Van Nguyen — a young Australian who was hanged in Singapore on John Howard’s watch — on the other?

One clear difference is skin colour, which has undoubtedly affected the kind of media coverage they’ve received in Australia. Successive Australian leaders also appear to think the lives of these young non-Anglo men are more dispensable than white ones.

The Howard government was utterly gutless in the case of Van Nguyen. As Nguyen faced his last days alive, our fearless foreign minister Alexander Downer sat on his hands, telling media the young man would need a “miracle” to save him now.

Sukumaran and Chan don’t need a miracle. They need their government to advocate forcefully on their behalf. The time is now.

Who is really responsible for the fate of the Bali Nine?

I certainly wondered if skin colour had something to do with it.

Might Crikey consider spending more effort on issues such as International Terrorism which are far more important to most Australian citizens than defending international drug peddlers?

The fate of Sukumaran is clearly and absolutely NOT in the hands Tony Abbott and Julie Bishop. Crikey’s attempt to politicise this issue is shameful.

As is the racist tone of your editorial. Rush was a mule these two were the ringleaders. Playing the race card is such low rent.

When Michael Keelty’s AFP tipped-off the Indonesian Police about the Bali 9, rather than simply arresting them on return to Australia, the dire implications were already known. Some were barely more than kids, but death sentences were inevitable. Given that it was actually the concerned father of one of the nine who had tipped-off the AFP in the first place, the betrayal of trust was absolute. However, the playing of politics and the dismissing of human life was nothing new.

Keelty, and his boss, Justice Minister Christopher Ellison, had already withheld a host of life critical primary evidence from Schapelle Corby and the Bali Court. This was not only in terms of the criminal gangs which were active at Sydney Airport, as exposed by the Kessing Reports, but included direct and vital facts: for example, that her boogie-board bag was the only item NOT scanned at Sydney Airport (it was diverted by baggage handlers who were known to be corrupt) and that 5kg had been added to the weight of her luggage AFTER check-in.

Equally, a number of aspects of the Bali 9 and Schapelle Corby stories were mirrored in others: the Haneef affair and the SIEV X scandal, for example.

Throughout, the AFP has remained unaccountable, adopting the role of a political enforcer, with a self-interest hierarchy hell-bent on hiding internal malversation, even to the extent of raiding Channel Seven’s offices with dozens of armed officers, in the prelude to the gagging of Schapelle Corby. Canberra has consented to this every step of the way.

But what of the Australian media? Where were the watchdogs of democracy whilst Keelty and his cohorts perpetrated such serial abuses?

The media record on Schapelle Corby demonstrates an endless catalogue of the smear, vilification and fabrication, as well as the unremitting practice of outright censorship of the central documentary evidence. On the Bali 9, an equally sinister and disturbing media sub-plot is now emerging.

COLLATERAL DAMAGE: THE BALI 9
When Schapelle Corby was released on parole, a degree of panic must have ensued within the offices of a number of media groups, not least, Fairfax Media, which had been at the forefront of efforts to use the death of her father to spin fiction (dead men can’t sue). A barely disguised campaign began to stop Schapelle Corby herself from revealing the existence of the swathes of official material held on the Expendable Project’s website. Her potential television interview came under fire from all sides.

One of the strands of this also stoked up significant impact in Indonesia itself. Not only were lurid stories syndicated, but Australian journalists, Michael Bachelard of Fairfax Media in particular, approached Indonesian officials and politicians again and again and again. These activities soon bore fruit in Jakarta, as her status rapidly became a public and political issue. Her human right to free speech was subsequently revoked, and she was illegally gagged.

However, in the process, the ground was simultaneously being set for the Indonesian attitude to the Bali 9, an issue which has become increasingly acute since the newly elected President declared that he would not grant clemency to those convicted of drug-related offences.

Ironically, Bachelard himself was to report: “Drugs are considered a public menace in Indonesia, and any move to appear soft on the issue is highly unpopular, as Dr Yudhoyono discovered when he gave a five-year sentence cut to Australian Schapelle Corby”. Given his own hostile reporting on the Corby case, this was an extraordinary statement, yet it too was to be taken up and repeated by others, both in Australia and Indonesia.

The Bali 9 had demonstrably been undermined by Australian media abuses against Schapelle Corby, yet the same media was now seeking to use the consequences of its own actions by pointing fingers in the broad direction of its silenced victim.

ENTER THE DAILY MAIL AUSTRALIA
Worse was to follow. On 12th December 2014, the Daily Mail Australia chose to construct a story which presented unproven allegations against one of those under threat of being brutally shot.

Incredibly, this was also presented within the context of an “evil plot”, and was quickly syndicated in Indonesia.

Given that these wholly unsubstantiated allegations had been around for years, the timing of the article, with lives hanging in the balance, was itself telling.

Regrettably, these developments paint a very clear picture of how the Australian media will manipulate the background of any execution. Fingers will be pointed anywhere, except at those who created the death-row situation, who will be silently protected throughout.

Rather than expose the multitude of shocking actions of Michael Keelty and the AFP, and the complicity of Canberra, the character of those under a real threat of death is being blackened, for both Australian and Indonesian consumption.

Unfortunately, as the Schapelle Corby case has repeatedly exposed, this is the modus operandi of the Australian media. Ethics and integrity have become alien commodities, and the truth is never allowed to get in the way of self-interest, and a groupthink narrative which so readily discards human life.

Everyone is expendable, except for the powerful, the privileged, and journalists.

Norman, if we are to ignore the plight of the Bali nine where do we draw the line? Is it okay for governments to murder our car thieves? Political protesters? Should somebody stupid enough to smoke weed in S.E Asia be put to death?

Perhaps the world would be a better place if Sweden had just taken Assange out back and shot him but for the sake of simplicity why don’t we just have a That’s-Not-On stance on killing australian citizens with no exceptions?