The Australian government needs to rethink the way it spends taxpayer money on submarines, as well as fighter jets and tanks. 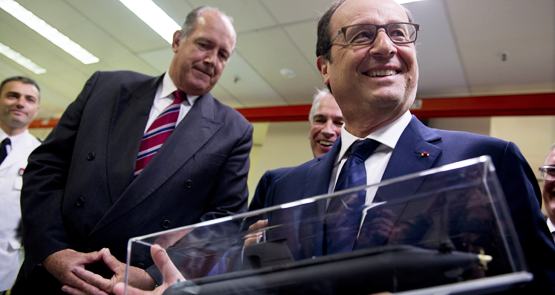 Australia’s new Defence Minister Kevin Andrews has already accompanied the Prime Minister to the Middle East even though he is yet to put his feet under the desk in Canberra. But there should be plenty of work waiting for him when he does after the Agence France Presse picked up a report in Japan’s Mainichi Shimbun newspaper that Australia had welcomed a Japanese offer to jointly build our next submarine: “The Australian side has taken ‘a positive stance’ on the proposal, the report said, adding the two countries may strike a deal by the end of 2015.”

There was no comment out of the minister’s office on this astonishing development, although some government source had clearly given the Japanese journalist comfort, leaving observers to try to piece together what is going on behind the scenes.

What process is being followed here, if any? Is this how Australia will decide the largest single purchase it will make over the next 50 years, costing $40-$60 billion? Through leaks and backgrounding, on-the-fly ad-hockery?

Last year, Treasurer Joe Hockey told ABC Radio there was “no time” for a proper tender to replace the Collins-class before the submarines were due to retire in — get this — 2026. That claim has been roundly rejected by shipbuilding experts who gave evidence in Parliament that Australia could produce a domestic submarine within 12 years without a capability gap. Hopefully, with a new minister replacing David “Canoe” Johnston, calmer heads will prevail.

In a piece for The Conversation website, manufacturing expert Goran Roos of Swinburne University called for a three-stage tender process that could see the replacement subs in service by 2027 or earlier.

Roos told Crikey yesterday that the whole tender process would take 24-36 months to conclude. The known potential contenders — Japan, France, Germany, and Sweden — would be invited and paid to do a contested project definition study, outlining how they’re going to solve the unique design problems to deliver the capability Australia needs:

“From that process you then know what is possible, and are better informed to then write the tender documents. At the moment, because we haven’t bought a submarine for a long time, we may not be very good at writing a tender.”

The project definition study would allow us to select two out of the four, by tender. “That means we can guarantee we get the functionality we’re looking for, and also understood what other benefits they’re going to give us so we can them make a trade-off issue.”

Given the obvious sensitivities of defence procurement, the tender process cannot be open to the public of course. But that doesn’t mean the public should be kept in the dark. Roos says other countries manage defence procurement by making the process transparent, while the content of the process — the tender specifications, and the tenders themselves — remain confidential. Tenders should be subject to review by the Australian National Audit Office and parliamentary oversight.

Consultant Jon Stanford of Insight Economics, a defence industry specialist and former senior federal official, agrees there is still time for a proper tender process to choose our next submarine — although he believes that the risks involved in designing and building complex submarines locally are excessive.

Stanford cites the 2005 $8 billion tender for three new Air Warfare Destroyers as an example of what not to do. Tenix was then finishing off the 10-ship Anzac Frigate program at Williamstown shipyard at Melbourne, and had done an excellent job in bringing the program in on-time and on-budget. Both Tenix and the Australian Submarine Corporation (now ASC) tendered. Defence wanted to see naval shipbuilding concentrated with ASC in Adelaide. The Department of Finance, which owned the Australian Submarine Corporation, wanted to maximise its value by awarding it lucrative contracts, whereas Defence as customer had different priorities — a direct conflict of interest. The cabinet sub-committee that approved the decision was dominated by South Australians. The Australian Submarine Corporation won the tender although, as Stanford points out, it had never built a surface vessel at that point, “not even a canoe”. The result has been $400 million cost-overruns and controversy — although there is plenty of debate about whether the ASC, or the contract design, is to blame.

Going by recent history it seems that the larger and more strategically sensitive the defence purchase is, the less rigorous and more political is the procurement process — precisely the opposite of what should happen. That’s because the largest defence procurement decisions go through cabinet, which can simply bypass the usual governance law that would usually apply, such as the Public Governance, Performance and Accountability Act that applies to the Defence Materiel Organisation.

Decisions to buy the Joint Strike Fighter, the Super Hornets, the Abrams tank — or even further back, Labor’s original decision to build the Collins-class — have all resulted in uproar. New Victorian Premier Daniel Andrews was urging another quick decision on Monday, calling on the federal government to give follow-on supply ship work to BAE Systems (which acquired Tenix Defence).

Our next submarine purchase is simply too important. Decisions taken on an ad hoc basis, making it up as we go along on a tender-by-tender basis, mean our defence institutions do not develop procurement capability and lose credibility with potential suppliers — eroding value down the track.

Regardless of whether a local or foreign build is chosen, Australian taxpayers are within their rights to demand that a proper, transparent process is adhered to before such a large decision is taken on how to spend so much of our money.

What can citizens and travellers do about border closures? Appears, not much

“The Australian government needs to rethink the way it spends taxpayer money on submarines, as well as fighter jets and tanks”

Quite right Mr Manning. Include helicopters too.

Remember the Kaman Super Seasprite order for the RAN? What an expensive joke. The people who make these errors should never be allowed out on their own.

I’m sick of people always citing the Collins subs as the reason that no manufacturing should be undertaken in Australia. Every Defence procurement seems to suffer the same fate of problems and overruns of time and cost, be they Australian, American or other sources. Apparently, from what I’ve read on the subject, things would improve if the heads of the Defence forces kept their bibs out of it.

Interesting, that there is no time for a proper tender and evaluation was key reason for the Queensland Health payroll debacle.

I spent about 8 months working with a defence contractor involved with ASC in the submarine program. I came away shocked at the amateurism. What I find difficult to comprehend is why ASC can be considered given their notorious track record.

I suspect largely the issue is those doing the procurement aren’t the end customers (yes, I’ve been on the receiving end of this) and as such have little idea – beyond some nod towards initial consultation – as to what the customer actually wants or needs.

In fairness, plenty of customers don’t know this either.