One Nation looks for candidates. Yesterday’s announcement by Premier Campbell Newman of a snap Queensland election led The Courier-Mail to proclaim “holiday is over” and it looks like One Nation was caught on the hop. The revived party is advertising for candidates to run in the election, in what we assume will be a very quick application process (the campaign is only four weeks long). The application form asks for a resume and photo, plus a few personal details: 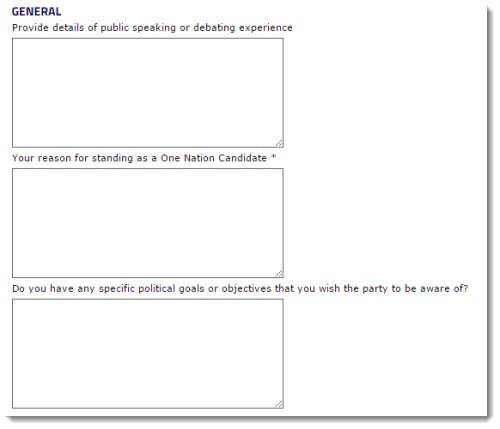 The other main question is to “Please identify your Strengths, Weaknesses, Opportunities & Threats regarding your election campaign so that we can understand your position in the electorate and make strategic suggestions”. We wonder how many applications they will get …

PM’s media job offered around? Not so. We received a very detailed tip this week that before former ABC political correspondent Mark Simkin took up the job as head of the Prime Minister’s media department, the role had been offered to former Sydney shock jock Jason Morrison. The rumour had also aired on Perth’s 6PR radio — they ran it without running it past Morrison, who has spent much of the last year as an adviser to Gina Rinehart. We called Morrison, who told us the rumour was completely untrue and he doesn’t know where it came from.

Fight for your right to party: part 1. In a sign that some politicians may need to get their eyes checked while on their breaks, West Australian Liberal MP Luke Simpkins mistook stickers promoting a Perth nightclub event for the Islamic creed the Shahada, and called the West Australian transport minister to have them painted over. “Last week, I noticed black disks that appeared to be Shahada symbols,” Simpkins wrote on Facebook. 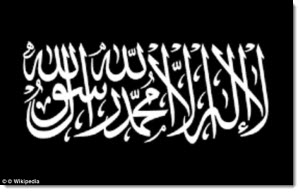 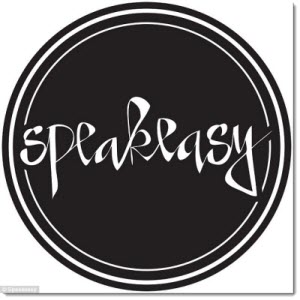 “Thanks to the Transport Minister and his adviser for getting them painted over quickly after my call.” Simpkins, who has said in the past that eating halal meat could lead to Australians converting to Islam, has since deleted his Facebook page. We wonder if Speakeasy, the event the stickers were advertising, will get some new clientele thanks to the gaffe?

Fight for your right to party: part 2. As Ms Tips approached deadline this morning, she was appalled to receive an email from the powers that be in Private Media (publishers of Crikey) that said management would no longer provide Friday night drinks for staff every week. Drinks will now only be supplied on the last Friday of each month. In a move that seems as unfair as the Abbott government’s budget, these cuts have hit hard. Being quite fond of these weekly beverages, Ms Tips asks that you send (alcoholic) care packages and encourage your friends to subscribe to Crikey.

New flight features at China Eastern. This ad appeared on page 7 of The Australian Financial Review today and it looks like China Eastern airlines is a little too fond of Google translate. Plugging their “Sky High Entertainment”, the ad offers “crispy touched screen & Diversification choice of movies”. If you weren’t sold on “crispy touched screens”, we think the “diversification choice of movies” will definitely get you on board. 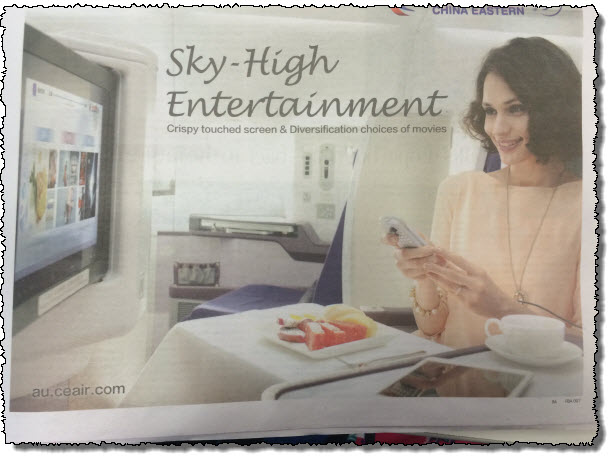 Downward facing dog advocate. A lot of us have been struggling to find a comfortable position when it comes to the use of taxpayer dollars for yoga classes at IP Australia, as reported by Matthew Knott in the Fairfax papers last week. One person who isn’t tying himself up in knots about it is Rajan Zed, a self-proclaimed “Hindu statesman” who sent out this press release:

“In a statement in Nevada (USA) today, calling it a step in the positive direction, [Rajan Zed] urged other Australia Government departments/agencies to do the same, thus incorporating yoga in the lives of government employees.

“Zed, who is President of Universal Society of Hinduism, pointed out that yoga, referred as ‘a living fossil’, was a mental and physical discipline, for everybody to share and benefit from, whose traces went back to around 2,000 BCE to Indus Valley civilization.

“Rajan Zed further said that yoga, although introduced and nourished by Hinduism, was a world heritage and liberation powerhouse to be utilized by all. According to Patanjali who codified it in Yoga Sutra, yoga was a methodical effort to attain perfection, through the control of the different elements of human nature, physical and psychical.”

We’re sure many members of the government will take note — there’s more than a few who could benefit from a “methodical effort to attain perfection”.

Starbucks flat white reviewed. As we told you yesterday, Starbucks has just introduced the flat white to its menus across America, to much curiosity from the locals. Lucky for us, we don’t have to fly to the US to find out if they’ve got it right, with The Guardian‘s David Marr and ABC Radio presenter Red Symons in the land of (usually) terrible coffee to test it out for us. The verdict isn’t a ringing endorsement, but it’s not bad either. We especially appreciate that ABC correspondent Ben Knight filmed Red’s experience. 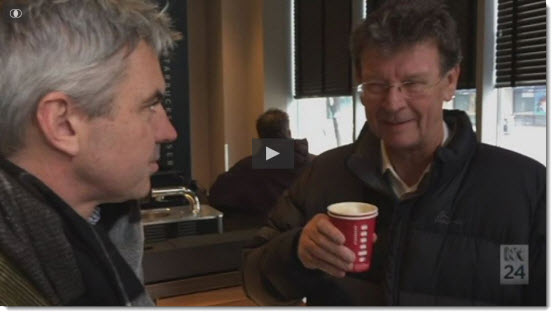 The ABC might want to take Mark Simkin out of its promo for is news service – the one that swings across the world, starting with Lisa Miller in the US, then around Australia – Simkin’s voice still says “Canberra” and his face beams from that spot on the map of Oz.

Thank you for reminding me that my local MP is Luke Simpkins. I keep on forgetting and thinking that it’s Richard Evens (who was the member back in the ’90s), possibly because it’s a familiar name (that of a prominent historian).

I can’t think of anything good my MP has done (unlike the local state MLA).

I know we all have to move on. But I really wish that Firstdog could come back and do quick “guest appearance” on Crikey to discuss “Downward facing dog advocate”.

Did you not see his whisky special paddy? There’d be some downward facing dog after that methinks!