Being a state opposition leader is a tough job, and you're just as likely to be shunned by your colleagues as you are voters. 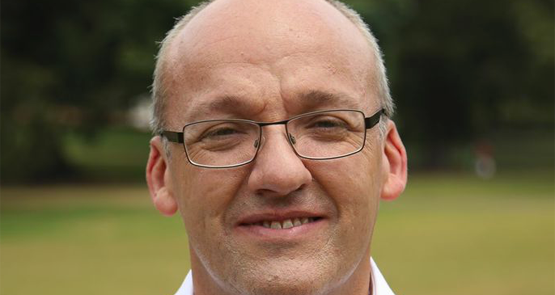 Things are rapidly slotting into place for the looming one-two punch of state elections in New South Wales and Queensland, with voters in NSW now aware of the identity of their prospective Labor premiership candidate, and Queensland Premier Campbell Newman lighting the fuse on a freakishly unorthodox high-summer election.

But let’s stick with NSW for the moment.

On Monday, upper house MP Luke Foley was elected unopposed to the Labor leadership, and must now deal with the small matter of finding himself a berth in the lower house.

Not so long ago, the gambit of contesting the premiership without having a seat to do it from would have seemed highly audacious, if not outright irregular. However, the precedent of Campbell Newman gate-crashing the premiership in Queensland at the 2012 election has probably put paid to that.

The more substantive challenge ahead of Foley is to build a saleable public persona from the ground up in less than three months, with much of that time corresponding with a part of the year in which politics is farthest from people’s minds.

Furthermore, he must achieve this in contest with the increasingly known and evidently very popular quantity that is Premier Mike Baird, who, even after the debacle of ICAC, goes into the election holding nearly two-thirds of the seats in the lower house.

For all his deficiencies as a marketable political commodity, Foley’s predecessor, John Robertson, had done nearly four years of hard yards as the public face of an opposition for which opportunities for publicity were at a premium. With the clock on the March 28 election rapidly running down, Labor cannot be relishing the thought of throwing all that work away and starting again from scratch.

Indeed, it might be thought an accomplishment for Robertson to have stayed in the job for as long as he did, in view of the recent historical form of opposition leaders in New South Wales and elsewhere.

Some insight into this is offered by the chart below, which records the manner in which opposition leaderships in the five mainland states have come to an end during the post-war era. Each leadership change is categorised according to whether there was a party room vote (“deposed”), a resignation that appeared to pre-empt one (“duress”), a resignation resulting from some manner of scandal (“resigned”), relatively quiet retirement (“voluntary”), or the self-explanatory “lost seat” and “died”. 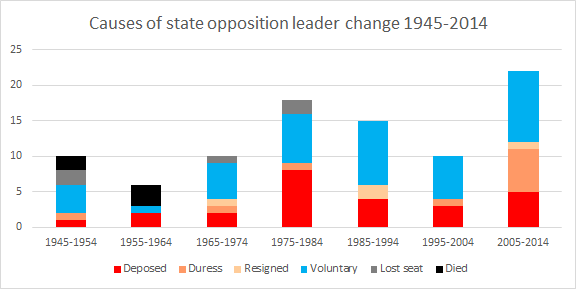 As can be seen, for the first two decades after the war, opposition leaders who persistently failed to become premiers typically found the Grim Reaper catching up with them sooner than rebellious colleagues.

The ALP in particular, which to its great detriment has recently become a byword for revolving-door leadership squabbles, once took great pride in the loyalty it showed defeated leaders.

As well as allowing Doc Evatt and Arthur Calwell three strikes at the federal level in the Menzies/Holt years, the party’s apparently boundless patience allowed Jack Duggan and Mick O’Halloran to try and fail four times in Queensland and South Australia respectively, and consecutive Victorian leaders in Clive Stoneham and Clyde Holding to each emerge empty-handed after three attempts.

The sociological foundations for the changes since are well understood, and relate to the increasing importance of leaders relative to parties as determinants of vote choice.

In the immediate post-war years, when partisanship was locked firmly into place by class loyalties, election campaigning had more to do with mobilising a fixed support base than persuading swinging voters.

In time though, the decline of blue-collar manufacturing and the growth of service industries left an increasing number of voters struggling to tell which was their dog in the two-party fight.

At the same time, electoral politics were being further transformed by television, which projected leaders’ personalities into living rooms even as the grip of party loyalty was starting to loosen.

For state oppositions especially, which must always struggle to be heard through the array of voices competing for news media space, projecting a favourable leader image is about the only means available in getting through to the crucial voters who are interested enough to pay some level of attention to politics, but not so interested as to be entirely set in their ways.

If things don’t appear to be going according to plan, a change at the top can all too readily seem like the only thing for it.

Nonetheless, evidence is emerging that dizzying processions of leadership changes have achieved all they’re ever going to, and that the message is starting to sink through to the major parties.

Whereas 12 opposition leaders from five of the states under the microscope fell by the way side between 2005 and 2009, only four have done so since — one being the arguably exceptional circumstance of John-Paul Langbroek making way for Campbell Newman to lead Queensland’s Liberal National Party in 2011.

The others were Eric Ripper for Labor in Western Australia, Isobel Redmond for the Liberals in South Australia, and now John Robertson — each of whom was allowed between three and four years to get some runs on the board, with Redmond even granted the luxury of actually contesting an election.

As for Luke Foley, it can always be argued that he should take heart in the example of Bob Hawke and Western Australian Premier Colin Barnett, both of whom stormed to their party leaderships and then to power in only the time it took to conduct an election campaign.

But of course, Hawke had spent well over a decade as one of the best known figures in Australian public life, and Barnett had an earlier election campaign from four years previous under his belt.

Although observers of New South Wales politics have long been rating Foley as a name to watch, nothing in his career history as a union official, party administrator, shadow environment and planning minister and member of the state’s somnolent upper house has given him much opportunity to communicate the fact to voters at large.

When the time comes to settle accounts after the election, Foley’s colleagues would do well to take a leaf out of their Labor forebears’ book, and cut their man some slack.

Clearly the Powerbrokers felt he was best suited to this role, and with the limited time available, surely there should be less likelihood of too many negatives about him coming out in time to damage us too much?

If my memory serves me correctly, Neville Wran was parachuted into the Legislative Assembly to become leader after making his mark in the Legislative Council. He had a significantly longer time than Foley to make his mark though, and was facing a fairly inept Liberal government.

Neville switched to the Lower House via an uncontested rank and file pre-selection in the days when Sussex Street and Canberra lacked their current dictatorial powers to intervene. He’d made a far more impressive figure in the Legislative Council than has Foley, and even then was fortunate to win the leadership in the Legislative Assembly by only one vote, thanks to the delay in one of Pat Hill’s supporters being declared elected in Coogee. At the time, by the way, Legislative Councillors had NO vote in Labor Caucus.

Not so much a quesion of ‘where’ does the SussexSt Lubyanka find such bloodless mumpties but ‘WHY?’.
Do they really fear integrity & ideas that much?
Someone should ask Nathan Reese.