Mayne: News Corp publishes flattering bio of a billionaire — but which one? 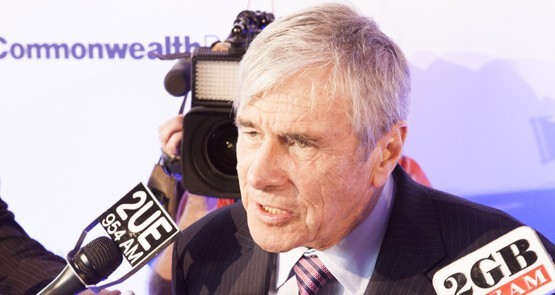 The Melbourne Press Club released a hard cover book last year entitled Media Legends: Journalists Who Helped Shape Australia. It was edited by former editor of The Age Michael Smith and Mark Baker, a former Melbourne Press Club president who is now its full-time CEO. Many of the 81 profiles are beautifully written and contributors include the likes of Mark Scott, Les Carlyon, Steve Harris and Laurie Oakes.

“He can turn a dollar, craft a scheme, and work more jobs at once than any other sane man should manage.”

“At 17 he joined the Gippsland Times and Maffra Spectator for a year before chasing a tertiary education and more dodgy schemes in the city.”

“He owes a little to ‘Arfur Daley’, and a little to Damon Runyon. If he hadn’t been the superb journalist he is, he’d probably be the bloke in the front bar selling fake Rolexes from inside his coat.”

Which brings us to Rule’s latest “deal” with a couple of billionaire media proprietors that resulted in a rollicking 175,000-word biography called Kerry Stokes: The Boy From Nowhere.

As a money making scheme, it is one of the best Rule has pulled off, given the advance from Murdoch book publisher Harper Collins reached $305,000 after a highly competitive auction which was effectively put together by Stokes, Rule and literary agent Deb Callaghan.

Such a pay day funded by Rule’s current employer, News Corp, and boosted by Stokes’ pledge for full access and cooperation, was always going to raise questions about objectivity in Australia’s billionaire-dominated media market.

The Australian’s reviewer, Paul Cleary, produced arguably the toughest review of the book last November, which concluded as follows:

“Another problem is that Rule likes Stokes a great deal. This may explain his discretion about Stokes’s role in his three failed marriages. He refers to Stokes wanting to live a ‘single man’s life’ towards the end of his first marriage to Dot, but goes no further. This would not seem so lopsided if harsh details about Dot and the two children from this relationship had been left out. The personal details about third wife Peta Toppano also seem unnecessary.

“Much of Stokes’s personal life was raked over in Margaret Simons’s biography, published last year, so it’s puzzling as to why Rule felt the need to go over it again and then include even more uncomfortable details about these damaged people. It seems to be a case of being in thrall of a man he greatly admires.”

The same could be argued about the characterisations included in a surprisingly detailed nine-page summary of an incident in 1996 when Today Tonight promoted and then pulled a story critical of Victoria’s then-premier Jeff Kennett’s share dealings. Today Tonight‘s presenter at the time, Jill Singer, collapsed after announcing that management had pulled the story. It was reported by Fairfax that Stokes had personally intervened to stop the story going to air, but he denied this and Fairfax later retracted and apologised. The story was run unchanged the next night, attracting record ratings.

Adding extra piquancy to the affair was the fact that Singer and Stokes had a brief relationship in 1995-96 before this Kennett situation blew up. Kennett’s job should have come under pressure after these revelations, but instead Singer was later fired along with all the other Seven journalists who worked on the story, as was noted in this 1997 Four Corners piece.

Rule cast doubt on the question of whether Stokes and Singer had a relationship at all. The passage on page 348 reads as follows:

“Jill Singer’s collapse would ensure the story entered media mythology — and generated much speculation about whether she had cultivated a brief personal relationship with her proprietor. Seven insiders gossiped that Stokes and Singer, both smokers at the time, had shared cigarettes outside a function some months earlier and struck up a friendship that petered out quickly. Singer says there ‘was a relationship’ but doesn’t elaborate. Stokes shrugs and says he was seen talking with many women over the years, most of them friends or business contacts. He has now given up smoking.”

Singer is not one to hold back and told Crikey she felt Rule’s book fell into the category of “hagiography”.

Truth be known, it’s a fascinating and beautifully written read that is doing well with sales so far of about 20,000 after three print runs. If it can reach 30,000, Harper Collins might actually get its money back.

We need more detailed books in Australia about the powerful oligarchs and institutions who run the place. No one has yet comprehensively written up Macquarie Group, but at least the big three billionaires from Perth — Stokes, Gina Rinehart and Andrew Forrest — have all now been thoroughly analysed in journalistic books released over the past two years.

The business of conflict in The West

Of course, the real point of this book was to act as a sycophantic spoiler so people wouldn’t read the Margaret Simons book. Common tactic.