iSentia Index: a Festivus for the rest of us as pollies announce priorities for 2015

Bushfires and elections boosted the premiers of South Australia and Queensland, while talkback turned to how bureaucrats and their taxpayer-funded yoga classes.

As new year celebrations came and went, Prime Minister Tony Abbott retained his regular place atop our media coverage ladder after hosting the Australian and Indian cricket teams at Kirribilli House, pledging an extra $5 million in aid during an undercover (read: no media allowed) trip to Iraq, and reiterating his intention to leave the GST be during his first term.

South Australian Premier Jay Weatherill leapt up in mentions as he updated media and reassured residents about the catastrophic bushfires which have destroyed 38 homes in the Adelaide Hills. And new contenders for high chart positions are in play following the Cabinet reshuffle which has seen Minister for Social Services Scott Morrison switch portfolios amid much media fanfare, while Minister for Immigration and Border Protection Kevin Andrews is now ranked 17 on our list, having not ranked here at all in December.

Foreign Minister Julie Bishop hovers around fourth place, in the media spotlight when Egypt’s highest court announced a retrial for Australian journalist Peter Greste, and for reassuring the public that jihadists returning to Australia are being monitored.

But much of the talkback radio focus was on state politics, including the NSW Labor leadership change from John Robertson to Luke Foley and the upcoming Queensland election, which was called for January 31 by Premier Campbell Newman.

Amid all this Abbott’s former physician, Dr. Killer, added to media hubbub warning that the PM should stop cycling, as it’s reportedly too dangerous for a person in his position. 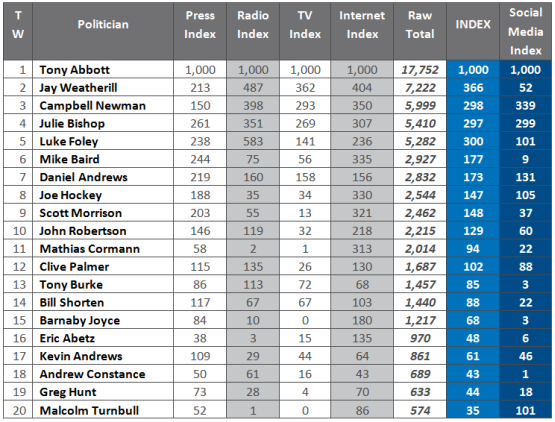 With just over three weeks until the Queensland election, Premier Campbell Newman has dived head-first into the campaign trail.

Buckingham Palace has issued three denial statements in as many days since child sex abuse allegations were levelled against Prince Andrew, who has cut short his Swiss visit.