What would it take to build a tram network the size of Melbourne’s?

Melbourne is fortunate it inherited the largest tram network in the world, because building something like it today -- say in a city such as Sydney -- would be extraordinarily expensive and difficult.

Melbourne is fortunate it inherited the largest tram network in the world, because building something like it today — say in a city such as Sydney — would be extraordinarily expensive and difficult. The US has over 45 operating streetcar and light rail systems but none of them are anywhere near as large as Melbourne’s tram system. Melbourne has the largest extant urban streetcar network in the world with 249 kilometres of double track and 487 trams.

If Melbourne’s tram network had been removed in the 1950s and ’60s like similar systems in Sydney, Brisbane, Adelaide, Perth and many regional centres were, it would be astronomically expensive to build something like it today from scratch. The cost of rolling stock alone would be in the region of $3 billion.

Based on the actual $1.6 billion it cost to build the newly opened 13-kilometre Gold Coast G:link line, a network the size of Melbourne’s could have a total cost in the region of $30 billion.

Or if we extrapolate from the estimated $2.2 billion it’s taking to build Sydney’s new 12-kilometre CBD and South Eastern Light Rail system, the total cost could be in the region of $45 billion.

Of course these are “light rail” rather than “tramway” systems (i.e. most of the network runs in its own right-of-way, whereas around 80% of Melbourne’s network shares road space with other vehicles).

However, if Melbourne were building a new system today from the ground up — or if, say, Sydney sought to build something of similar size — it would face the same sorts of pressures to provide a much better and more costly network (eg. with more segregation from traffic) that other cities are experiencing. Decisions made many years ago simply wouldn’t be politically viable in today’s car-oriented world — one of the key reasons for the general escalation in infrastructure costs over time, especially in Anglophone countries, is the higher expectations of users and the public. 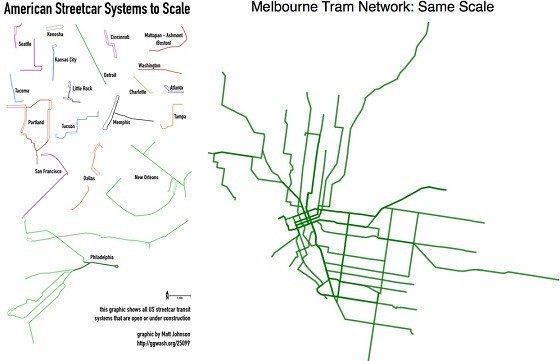 A brand new 250-kilometre network would have the advantage though of offering an opportunity to obtain substantial economies of scale. However, whether that opportunity were realised would depend on the sequence of construction; Melbourne’s network was built incrementally over the course of a century.

There’s no guarantee, or even likelihood, that any new network of similar size would be constructed in accordance with the most efficient schedule. No matter what they might say, politicians don’t think or act like that.

Even if the total cost of a similarly sized network were, say, a mere $20 billion, that’s equivalent to two or three “once-in-a-generation” transport projects. The benefits would have to be equally massive to justify that sort of outlay.

But here’s the challenging issue. Melbourne’s trams carry around 4% of all motorised passenger trips per day in the metropolitan area. A brand new system built to a higher standard should do better, perhaps 5% or even 6% when completed.

Melbourne trams do much better though in their key “market”: trips to work in the city centre made by inner-city and inner-suburban workers.

Around 15% of all CBD workers in Melbourne arrive by tram, as do 12% of those who work in Southbank and Docklands. This is where trams do best; more than half of all the work journeys made by tram are to these three geographically tiny locations.

Moreover, up to 25%-30% of commuters living in inner suburbs like Brunswick, Northcote, Albert Park and Kew travel to work by tram.

There are three reasons why trams nevertheless have a relatively small mode share when viewed from the whole-of-Melbourne perspective:

Trams  — and trains, which have a mode share of 6% — do best in terms of mode share when cars are not a viable option (i.e. primarily for work trips to the CBD where traffic congestion and parking costs make cars unattractive).

There are two important messages here. One is that Melbourne is extraordinarily fortunate that it retained this asset when other cities removed theirs (Sydney’s network was actually larger than Melbourne’s). It was assembled incrementally over 100 years, almost all of it in eras when the politics of construction in built-up areas was easier than it is today.

The other is that providing rail-based infrastructure is extraordinarily expensive to retrofit into established areas relative to the impact it has on car use and traffic congestion. It’s difficult to see how “just build more infrastructure” is a viable strategy for coping with projected population growth in major metropolitan areas.

City policymakers will have to think much harder about ways of managing the demand for travel in cities rather than accepting all demands should be catered to. They’ll also need to focus on how to extract much more value from the legacy infrastructure they’ve fortuitously inherited.

Future expenditure on what will surely be a relatively limited number of new major infrastructure projects will have to be highly targeted; no more boondoggles or “nice to haves”.

The life and death of a shopkeeper

Will Australia’s love for the fair go become just another statistic?