A preference to remember. Late last year, South Australian Premier Jay Weatherill’s precarious hold on power grew somewhat less precarious by a rather curious result in the byelection for the seat of Fisher. Almost inconceivably, the nominally conservative seat, until recently held by a beloved independent (who died in October), turned red, as a 10% swing towards the sitting government mere months after an election saw Labor’s Nat Cook elected with just eight votes to spare.

Labor didn’t have the Greens to thank for its victory. That party’s vote declined 1.3%, and within the Labor camp many are laying the blame at the voting information distributed by the Greens. The party didn’t register a ticket outlining its preferences (as parties in South Australia are required to do), but its instructions to voters handed out on the day featured a “1” next to their candidate, and an “x” in the box of everyone else. Many Greens voters filled out their ballots thus, and Ms Tips understands this saw a not-insignificant number of their votes discarded. “I wouldn’t be surprised if it was one in three,” a South Australian Labor insider who worked on the campaign told us.

Queensland leadership: part one. As we press publish today, we hope that Crikey readers are not at all surprised by Queensland Premier Campbell Newman officially announcing a snap January 31 election — we had a tip late last year that it would be soon, as the Electoral Commission of Queensland had already taken out a three-month software contract. Before the news broke last night that the election would be sooner than others thought, we received this tip from someone who is less than sanguine about Newman’s chances of remaining premier and in parliament:

“Queensland political powerbroker Santo Santoro has switched his patronage from long time protege Treasurer Tim Nicholls and is now supporting Lawrence Springborg, for the premiership, after the next Queensland election. It’s now accepted political wisdom within the LNP that Campbell Newman cannot retain his seat of Ashgrove — everyone in the party believes that, except Newman. Springborg, who lost three elections on the trot as LNP leader (2004, 2006 and 2009), may finally get his wish of becoming premier, if the LNP manage to retain government. Springborg has been ably assisted in recent months by Ten News Brisbane refugees Cathy Border and Cathie Schnitzerling, who have joined his office as senior media advisers.”

We called Santoro, who declined to comment on the rumour. It seems that this election will only be part one of an exciting year for the sunshine state.

Queensland leadership: part two. The hapless Liberal National Party aren’t the only ones looking towards the looming Queensland state election with fear and loathing. Labor, faced with the unlikely though real prospect that they may make the largest majority in Australian political history a one-term government, now have a leader who no one thought would ever be premier. Annastacia Palaszczuk got the gig the way women usually do in the ALP — the situation was so screwed up they needed someone to take the fall. Now Palaszczuk may break the tape — in which case she would be beholden to no one, especially the all-powerful AWU. Labor might just be quietly hoping that Campbell can do one more election victory, so tha bruvvers can have their party back.

Holiday snaps. While many of us are sitting at our desks this week dreaming of our dearly departed holidays, Rupert Murdoch is still posing for happy snaps. Here he is in Beijing on the weekend, picking up some tips from the local media on how to be an effective government mouthpiece? 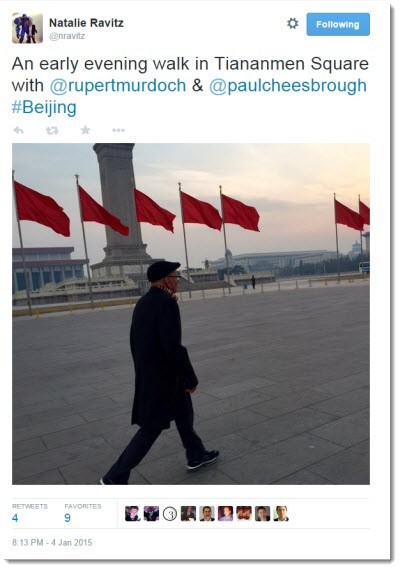 Just a flat white for Americans. For those of us who drink flat whites daily (or thrice daily, let’s be honest), it might seem strange that the ubiquitous Australian beverage has become a hot topic in the American media. Today is the day that American coffee chain Starbucks will start to offer flat whites on its menus and American news outlets are taking the move seriously — with a number of them publishing forensic examinations of the mysterious cup of joe. Quartz reports:

“‘It’s like a cappuccino, except that instead of a top layer of flavorless, airy, milky foam, it’s a velvety, dense foam that is mixed evenly through the drink,’ says Jason Fox, a Reuters executive.”

The Guardian‘s US edition even reports that New Zealanders are trying to take the credit for flat whites. All we can say is that we hope the move is more successful than when Starbucks tried to bring American coffee to Australia …

Nothing to say for Assange. Christmas didn’t come for Julian Assange, still in the Ecuadorian embassy. The WikiLeaks supremo lent his support to an idea backed by one of his biggest supporters, Frontline news agency founder Vaughan Smith, for a sculpture featuring life-size versions of Assange, Chelsea Manning and Edward Snowden standing on chairs — with a fourth chair empty for … you. Alas, at close of play, the crowdfunding drive had raised only 32,000 pounds of the 100,000 required for funding — to the relief of many of Assange’s supporters.

“Anything To Say?” was the proposed title of the project — to which the answer is, “Yes: don’t attempt to fundraise sculptures of yourself”.

Minister for what? We know that it can be hard to let go of a good title, but former defence minister David Johnston has been finding it especially hard. Looking at his website yesterday we noticed that it still carried the title Johnston lost just before Christmas. Being the first day back at work for many, we decided to leave it, but it’s still there today. We know it’s hard, but it’s time to move on. 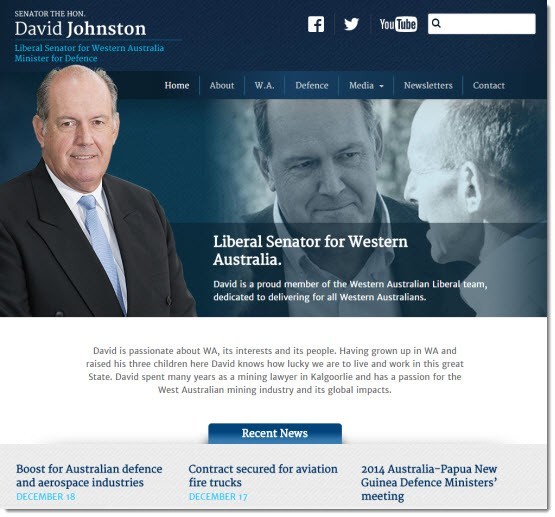 Queensland result a disaster for everyone, not just ALP

Re Just a flat white for Americans – when in Vancouver recently, I was warned off asking for a flat white. “It’s wall paint” they told me.