Two exhibitions showing in Melbourne over summer seem worlds apart, but both have much to say about our changing notions of culture and what constitutes celebrity, writes Melbourne-based crime writer and reviewer Andrew Nette. 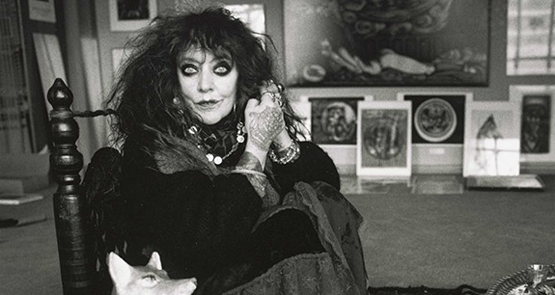 Vali Myers in her studio in the Nicholas Building

Ranging from the 1860s to St Kilda’s punk scene in the 1980s, the Bohemian Melbourne exhibition at the State Library of Victoria is a fascinating, if somewhat discursive history of the city’s alternative scenes. The rambling nature of material on display — photographs, artworks, clothing, printed artefacts — comes with the territory. Subcultures, be they youth, identity or artistically related, are notoriously difficult to pin down. “By definition bohemians are individuals who set themselves apart from others and resist categorisation,” writes the exhibition’s curator, Clare Williamson. “What they do share, however, is a predilection to swim against the tide, to reject the mainstream and bravely clear their own path.”

The earliest signs of Melbourne’s bohemian scene were transplanted by individuals new to the colony who were keen to maintain some tentative connection to the salons and artistic centres of Europe. Melbourne’s first designated bohemian (from the term bohemien, French for gypsy) was an English dandy named Marcus Clark, who, through a reversal in his family’s fortunes, ended up here in the 1860s. A writer and librarian, he founded what is considered Melbourne’s first bohemian club, the Yorick. The 1880s gold rush resulted in a flood of money and people into the city and saw a number of similar clubs established in cafes and restaurants, including the wonderfully named Cannibal and Savage Clubs.

Melbourne’s bohemian culture hit its stride in the 1930s as the local manifestations of global economic, political and cultural upheaval combined with the arrival of a wave of emigre artists from Europe. The ’40s saw other influences, like jazz brought by American servicemen. While the ’50s in Australia are commonly viewed as a time of economic prosperity and cultural stagnation, Melbourne hosted a vibrant underground bohemian scene, including a gay scene of secret house parties. Melbourne’s bohemian crowd gathered in places like Val’s Coffee Lounge — run by former swimwear model Val Eastwood and located at 123 Swanston Street, now the Hare Krishna Crossways restaurant but then decorated with blue carpet, mauve chairs and raffia lampshades — and the Prompt Corner, at the top of Collins Street. The Corner was run by budding actress Bunny Brooke who would go on to star in the racy ’70s TV show Number 96.

By the late ’60s Melbourne’s bohemian scene was out in the open. Students, playwrights, actors, filmmakers and musicians flocked to the inner-north suburbs of Carlton and Fitzroy; La Mama Theatre and the Pram Factory on Drummond Street were particular focal points. Carlton’s sexually liberated share house scene was portrayed on film for the first time in Tim Burstall’s 1971 movie, Stork, and in fiction by Helen Garner in her 1977 book, Monkey Grip, released as a film in 1982, all of which feature in the exhibition.

In the ’70s, Melbourne was a centre of Australia’s alternative music scene, spearheaded by bands such as Skyhooks, Captain Matchbox Whoopee Band and Daddy Cool, independent record labels Au Go Go and Missing Link, and community radio stations such as 3RRR and 3PBS. By the early ’80s, Melbourne’s bohemians, including a nascent punk scene, had moved across the river to places like Greville Street, Prahran and St Kilda’s Seaview Ballroom and the Prince of Wales Hotel.

The meat on the bones of this broad chronological schema is the exhibition’s portrayal of key individuals in Melbourne’s loosely defined bohemian scene. There’s Percy Grainger, pianist, composer, vegetarian, sexual adventurer with a fondness for self-flagellation. Barry Humphries, of course, and Mirka Mora, child of Jewish emigre parents who arrived in Melbourne from Paris in 1951 and helped kick-start our much-vaunted cafe culture.

Vali Myers was the lead dancer in the Melbourne Modern Ballet Company by the time she was 17, left for Paris at the age of 19, where she promptly became addicted to opium, then travelled the world. She returned 43 years later in 1993 and set up a studio in the Nicholas Building, Swanston Street, when living in the CBD was a highly unusual act.

Another central figure was Frank Thring. When he wasn’t playing fiendish villains in Hollywood blockbusters such as Ben Hur and El Cid, Thring could often be found holding court at the head table at Val’s Coffee Lounge. It’s worth attending the exhibition just to watch his brazenly camp ’60s television spot urging people to renew their TV and radio licences, and the advertisement he did for Martin’s Filter Cigarettes, resplendent in a gold lame dinner suit.

Its easy to idealise the past, reading into it meaning and coherence that didn’t necessarily manifest at the time. Every generation is bound to reinterpret and reinvent the notion of what is bohemian to suit their style and circumstances. Bohemian Melbourne ends by asking what it means to be bohemian today. It’s an interesting question, given most of the communal terrace houses once rented by students are now hideously expensive, and the increasing professionalisation (some might say, bureaucratisation) of the arts and literature scenes. A key facet of bohemia has always been the ability to create spectacle, either from one’s work or personality. But how is this done, given our social media-fuelled celebrity culture in which everything is spectacle and nothing is private?A different but no less sharp meditation on artistic communities and celebrity culture is provided in the images of the late New York based photographer Richard Avedon, the subject of the Richard Avedon People exhibition at Melbourne University’s Ian Potter Museum of Art. One of America’s most influential photographers, Avedon began his career taking advertising shots for a department store in the mid-1940s. His work caught the attention of several influential figures at Harper’s Bazaar, and his pictures soon appeared in its pages, as well as iconic magazines Life and Vogue. He became the staff photographer of The New Yorker magazine in 1992. He was on assignment for the magazine when he died in October 2004, aged 81.

In the ’50s and early ’60s, Avedon was a mainstay of New York’s fashion and bohemian scene and the images on display in Richard Avedon People include a large number of artists, writers and intellectuals, such as Liz Taylor, Andy Warhol, the Beatles, and members of the so-called Beat Generation. By the latter half of the ’60s, Avedon turned his attention to studio portraits of figures in the civil rights movements, as well as politicians and cultural dissidents like the Chicago Eight. He spent time in Vietnam and much later in Berlin after the fall of the wall.

While one could call Avedon a celebrity photographer, his pictures lack the gimmicks and props prevalent in the work of other famous celebrity photographers like Annie Leibowitz, or the “gotcha moments” of Ron Galella. Noted for his sparse, minimalist style, the subjects of the vast majority of Avedon’s work are looking straight at the camera, posed in front of a sheer white background.

Avedon’s intense, single focus results in some astonishingly frank and revealing images. Allen Ginsberg and his naked lover, Marilyn Monroe and Arthur Miller (she is looking besotted, he smug), the ravaged visage of jazz musician Chet Baker, the sheer force of will emanating from Malcolm X and the Black Panthers. Supplementing the work on display, a wider selection of Avedon’s work can be viewed on computers set up around the exhibition.

Avedon was working before the advent of our all-pervasive celebrity culture. While many of those he photographed were famous in their chosen field, their faces didn’t appear regularly in newspaper or on magazine covers. While familiar with their work I’d never seen photographs of T.S. Eliot and Marguerite Duras, both of which appear in the exhibition.

Famous, infamous, powerful and ordinary people, all appear strangely equal in Avedon’s photography. This quality is particularly evident in Avedon’s most ambitious work, a five-year project in which he travelled throughout America’s vast Midwest, visiting small towns, carnivals, coal mines, oil fields and abattoirs, photographing nearly 800 people. Avedon imbues these subjects — careworn waitresses and housewives, men caked in blood and coal dust, drifters with nothing but the mismatched clothes on their backs – the same dignity as the most powerful head of state.

Viewing these images is a moving and profoundly life affirming experience.

Get snap-happy in Ballarat

Culture by design: can Melbourne’s laneway infastructure be replicated?