What the TV networks told viewers about footage given to them by the government. And other media tidbits of the day.

Government ads on the news? Prime Minister Tony Abbott arrived in Baghdad over the weekend for talks on assisting Iraq in the fight against the Islamic State. Abbott didn’t allow Australian media to accompany him on his trip — according to the PM’s office, the travelling media representatives were not told about the Iraq leg of the journey because of a heightened security risk in Baghdad and the fact that the PM was travelling outside the international or “green” zone.

Government footage of the trip has sparked discussion on Twitter today, with former ABC journalist Jeff Waters suggesting that networks could have refused to run it since the media weren’t invited. The footage after all could have been edited, and gaffes deleted, giving viewers a partisan picture of what occurred.

So how did news organisations use the footage? On the major TV news bulletins last night, almost all the networks told viewers the footage was from a “government video”, but these disclaimers were not always prominent, with some only appearing for a few seconds. ABC News, SBS World News and Channel Seven News flashed a “government video” super in the corner of the footage for a few seconds. Ten News failed to make any sort of comment about where they had sourced their footage. Channel Nine was the only channel to explicitly say the footage used in their package was shot and released by the federal government. — Crikey intern Mahalia Dobson

If you can’t say something nice … While we’re on the subject of journalists being refused entry to things, politicians aren’t the only ones throwing road-blocks in the way of independent reporting. Last week Opera Australia artistic director Lyndon Terracini revoked the review tickets of two critical reviewers, including SMH and Crikey writer Harriet Cunningham for a prophetic and critical piece she wrote on Crikey sister site the Daily Review titled, “Why I’m not going to the Opera next year”. Stage Noise and former Bulletin arts editor Diana Simmonds was also removed from the complimentary tickets list, according to the Sydney Morning Herald.

Meanwhile, the Cruising Yacht Club of Australia kicked The Australian’s Sue Neales out of Sydney to Hobart media centre after sponsor Rolex took objection to a piece she wrote on how big money had changed the character of the iconic race. — Myriam Robin

Spelling it out. The puns in the News Corp tabloids are a little easier to make out this morning …

An appeal for Barrow. Late last year, self-represented lawyer David Barrow told Crikey he would be forced to declare bankruptcy after his attempt to sue News Corp columnist Andrew Bolt for writing in an email forwarded to the Press Council claiming that Barrow was a “vexatious litigant” failed in the Victorian Supreme Court. The ruling landed Barrow with a bill of $500,000 to cover most of News Corp’s legal costs defending the case.

Having had some time to reflect on his next move, Barrow has decided to appeal. He has until January 16 this year to formally do so. — Myriam Robin

Front page of the day. No sense complicating the story … 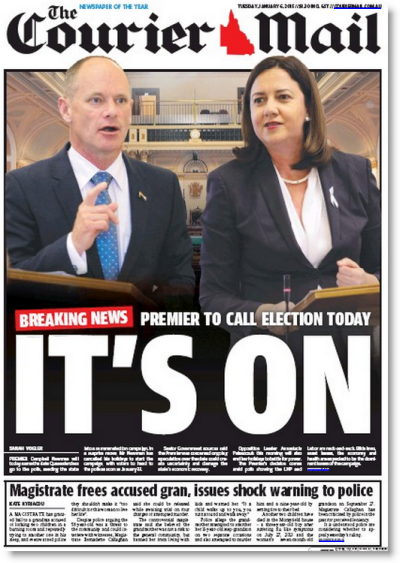