The United States loves to laugh at silly old North Korea -- but the Sony hack and more-than-implied threats thereafter showed the DPRK didn't get the joke. 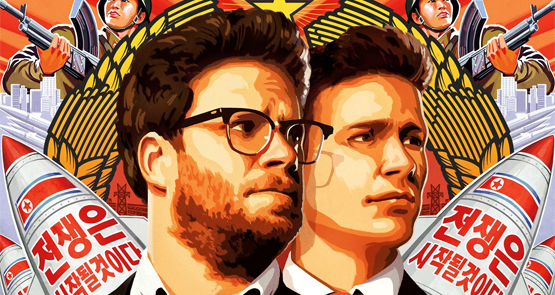 If shooting a wacky stoner comedy about the assassination of a living head of state whose country routinely threatens to burn the United States in a cleansing nuclear fire seems like a bad idea to you, it’s possible that you are both, a) sober, and b) have a bright future ahead of you at Sony Pictures Entertainment once they get through firing everyone responsible for the The Interview, the recently released film starring Seth Rogen and James Franco as the world’s least competent assassins since an unemployed house painter failed to kill United States president Andrew Jackson at point-blank range with a pair of loaded pistols.

Without giving too much away, Rogen and Franco play a pair of tabloid TV journalists who manage to book an interview with North Korean dictator Kim Jong-un. When the CIA finds out, the organisation coaxes the duo into assassinating Kim. The rest is farce.

The film predictably invoked the wrath of Earth’s most bellicose state. Pyongyang likened The Interview to an act of war and issued trite threats emptier than the bellies of its oppressed peoples.

While an undeniably audacious move on Sony’s part, by the end of 2014 it had started to look as though this latest publicity stunt had, to put it unfortunately, blown up in everyone’s faces, when a big question mark was placed over the Christmas release date after a spate of terror threats and email hacks prompted some cinemas to cancel showings over the break.

Despite all the hand-wringing and sabre-rattling, on December 25 The Interview received a limited theatrical release in the US and was also made available for purchase via digital channels after the creators decided to censor some of the film’s more insulting representations, including the gory depiction of Kim Jong-un’s assassination.

In the end the film provoked neither nuclear strikes nor much, if any, passion in film critics. The Interview went on to garner a middling 54% “fresh rating” on the film review aggregator website Rotten Tomatoes and, according to leaked reports, has been nominated for the Golden Raspberry — the top gong of the Razzie Awards ceremony, awarded annually to the worst film of the year.

More than anything, though, this cringe-worthy turn of events demonstrated once again just how open to ridicule the once-feared regime has become in the West — or, more specifically, the US. It’s not hard to see why. The dominant perception of North Korea in America has gone from a rogue nuclear power backed by a rising East to that little guy who picks fights in bars and ends up straining his teeth from a pint glass — and it’s partly due to films like The Interview.

Perhaps the turning point was in 2004 with the release of Trey Parker and Matt Stone’s Team America: World Police, without a doubt the best critique of post-9/11 America told entirely through puppets. Infamously portraying the late, great Kim Jong-il as a “ronery” old dictator who just needed a hug, this film set a new record for sheer volume of piss taken.

And it’s telling that in the execrable 2012 remake of Red Dawn — originally featuring a Soviet incursion into America — the invading Chinese forces were re-dubbed, re-shot and re-edited into mind-numbingly generic North Koreans half-heartedly baying for imperialist blood just as soon as someone in the studio realised just how large an audience they’d be alienating.

“Although Western audiences might find the DPRK and its tubby tyrant comical, Asian countries are understandably reluctant to cause friction between them and a regime still rumoured to execute out-of-favour party officials with flamethrowers.”

In the face of such relentless frivolity, North Korea’s indignant protestations only fuelled its image of impotent rage. When news of The Interview crossed over into the North, the official response from the regime read like a declaration of war:

“A preview of a film on insulting and assassinating the supreme leadership of the DPRK is floating in broad daylight in the U.S., a kingpin of international terrorism and its cesspool, shocking the world community.

“The U.S. has gone reckless in such provocative hysteria as bribing a rogue movie maker to dare hurt the dignity of the supreme leadership of the DPRK. This act of not fearing any punishment from Heaven is touching off the towering hatred and wrath of the service personnel and people of the DPRK.”

This is perhaps the greatest strength of satire: the more seriously you respond to it, the more you feed into the absurdity of the situation. North Korea’s utterly deadpan delivery only made the whole thing more perfect. If almost any other hostile foreign power in the world specifically threatened the US administration with “a strong and merciless countermeasure” for a perceived slight, the fallout would be almost literal — Abbott’s own brush with the front of Putin’s torso-hugging shirt was bad enough, and the DPRK doesn’t have any koalas to bail it out.

Ironically, this calculated repositioning of North Korea into everyone’s embarrassing nephew echoes the relentlessly efficient propaganda churned out by the party itself, in which film plays a central role — and no one knew this better than ronery old Kim himself. The late autocrat was famously passionate about cinema and its power to evoke and manipulate emotion — even going so far as to kidnapping South Korean director Shin Sang-ok to freshen up the stagnating talent pool north of the border. Shin was forced into service directing elegant propaganda films to popularise the party internationally through sympathetic, heart-wrenching portrayals of the Korean working class.

The Interview is, by all accounts, a very different kind of film — and one that struggled to pick up overseas distributors.

A series of emails between Sony and some of its more prominent international distribution partners released in a humiliating security breach — immediately blamed on North Korea, a charge the regime scathingly denies — reveals just how difficult the task of selling this movie to non-Western audiences was.

Taiwan in particular was reluctant to lend its support to an overseas release, stating that the movie wouldn’t stand a chance in its market:

“The concept of THE DICTATOR meeting ARGO may sound fun, but probably due to culture difference, we don’t find it entertaining at all. Not to mention our audience doesn’t react well to jokes about foreign politics. And we also don’t understand why it needs to get so violent in the end, which should get the film an R-18 rating here.”

Part of this is simply a question of humour not translating well across cultural lines; Seth Rogen getting high while James Franco laughs just doesn’t seem to grab international audiences the way it does American college kids (with the exception of Australia, New Zealand and the UK — France is coming round, but it’ll need a bit more time). Although Western audiences might find the DPRK and its tubby tyrant comical, Asian countries are understandably reluctant to cause friction between them and a regime still rumoured to execute out-of-favour party officials with flamethrowers.

Team America was and always will be a classic for ingeniously lampooning Bush-era US imperialism and cinema’s ability to satirise even gruesome events is one of its most precious functions.

Did you notice however how the manufactured story successfully took the torture revelations off the front pages of the media? Did you notice also that the DPRK was accused of the Sony hack, and when cyber experts pointed out that (a) they didn’t do it; and (b) it was in all likelihood an inside job (and named the chief suspect), Obama went ahead anyway and imposed sanctions on the DPRK. Once again the bully boy imposes its will in the complete absence of evidence.

Don’t ket the absurdities of the regime distract you from the very real geo-political bullying going on.

France is coming round, but it’ll need a bit more time

What the fuck is that supposed to mean?

We’re talking about a movie, right?

JO’N – the timeline was purely koincidental, Darth Cheney said so.

“The Earth’s most bellicose state?” Sure, North Korea continually provokes crises through testing nuclear weapons, but that is not the test of bellicosity. The talking up of the North Korean threat does nothing to contribute to sober discussions of how to deal with it.