Bypassing the filter: Abbott snubs journos in Iraq, but will it work?

Politicians circumventing the independent press to speak directly to the public is nothing new, but this fraught practice does seem to be increasingly popular with our leaders. 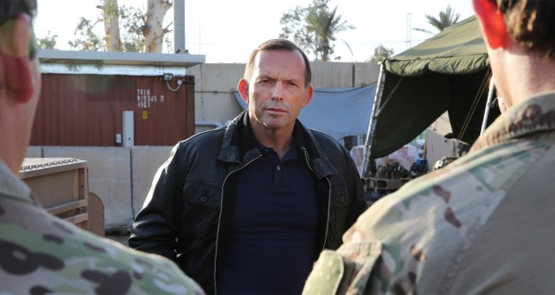 Do politicians need journalists anymore? To get their versions of overseas engagements on the news, clearly the answer is no, if recent developments are any indication.

Numerous reports yesterday slammed the Prime Minister’s Office for ditching a pooled group of journalists from Australia’s major media outlets in Dubai, after giving those journalists the impression that they would be able to accompany the prime minister and ask questions of him during a weekend visit to Iraq. The snub has united much of the press gallery in opposition to the unorthodox move. To make sure the visit was covered, despite the lack of journalists, a videographer employed by the Prime Minister took video which was then distributed to media outlets. All the major TV networks ran segments of this vision on the news last night, most of whom told their viewers it was government-supplied vision.

In response to questions about why it didn’t allow journalists to accompany the PM, Abbott’s office said security concerns were the cause. But this has been treated sceptically by many journalists, who are always alert to attempts by politicians to “bypass the filter”, as former US president George W. Bush dubbed attempts to talk to citizens without the mediation of an independent press.

Concern about the practice in Australia rose last year when the country’s most experienced political journalist, Nine News political editor Laurie Oakes, used a speech at Curtin University to raise his deep misgivings about how the balance of power in Australian political coverage has shifted rapidly in favour of politicians. Expanding on the themes on Radio National’s Media Report in October, he said journalists were rapidly losing the ability to question and demand answers of politicians.

“Now, more than any time I can remember, journalists are dropped from on high,” he said. “More and more, the Prime Minister’s office is deliberately feeding stuff out, in the way they want. This decides what people are reading, and takes power off the hands of the journalists. And there’s fewer journalists to fight.” Readers detect this, and know they’re not well-served, he said. That’s why their trust in the media was diminishing.

When Oakes first began reporting for Channel Nine in the early 1970s, the channel was able to decide who it would interview for political stories. That power has now been removed from the press. On the Sunday talk shows, the PMO decides who will go on what programs, giving journalists less power to question relevant ministers and allowing the government to practise internal patronage of favoured politicians. “If you can’t get access, you can’t hold politicians to account,” Oakes said. It’s not the only change he’s seen. In the Whitlam government, the prime minister was the only one with a press secretary, but now, Oakes lamented, such positions are ubiquitous. And all political actors are trained in how to avoid answering questions — again making it harder for journalists to find things out.

Oakes believed it would get worse. He pointed to America, where President Barack Obama has set up what is in all but name his own newsroom. “The new media covering the White House is the White House,” Oakes said. “They produce their own weekly news magazine … their own videos, still shots, blogs, apps. And increasingly, the White House Press Corps is being shut out.”

Oakes’ concerns, however, are not as alarming to everyone. BuzzFeed editor-in-chief Ben Smith is a long-serving New York and Washington political reporter who used to work at POLITICO. Speaking to Crikey on a recent visit to Australia, he said bypassing the pesky reporting of an independent press had always been a recurring fantasy of politicians. But he wasn’t sure it was all that effective.

“I can see the threat,” he said. “When I was at POLITICO, we’d be experimenting with awful-looking videos, while the White House was putting out these beautiful, sleek packages. And you do see them as competition.” But on the other hand, he continued, politicians speaking direct to the public was nothing new. In America, Franklin Roosevelt’s “fire-side chats” have become a cultural icon, which all politicians since have tried to imitate to varying levels of success.

But politicians, just like journalists, have been hindered in their efforts to command the public’s attention. The media in the US are now more fragmented than ever, and this means politicians are spending more time than ever dealing with and talking to the media, all in an attempt to get their message out to an increasingly distracted citizenry. “So look at Barack Obama. Based on his own media operation, he ought to be dominating the narrative. But he’s not.”

If you want to look at who’s had the greatest success bypassing the filter of professional journalists, it’s probably jihadis like ISIS, Smith says. It used to be that American journalists in Afghanistan or Iraq were a sacred species, courted by both sides who relied on them for media messaging. But jihadi groups have realised they don’t need journalists to represent their positions, and so have stopped courting them, or worse.

The power to tell stories has scattered, away from both politicians and journalists, Smith concludes. It’s possible journalists have suffered more than politicians from this, but the messaging woes of recent Australian governments don’t suggest politicians have it easy either.

‘They’re trying to take the journalism away’: Oakes and Ferguson on pollies’ obstinacy

Abbott, the nervy pugilist who may or may not have taken us to war

If the media wanted to protest the cancellation of the press pool to Baghdad, then they will have to act together and refuse to run the pictures if it happens again.

What’s the problem? It might just save a some money.
The standard of interviewing on display on the ABC yesterday, in questioning the former Ambassador to Syria was, at best based on ignorance (the journalists) and was downright cringeworthy. Media is replete with poor quality journalism that I am not surprised that the PM chose to go alone.

The politicians controlling the media is one side of the equation, and it is reflective of long term trends to control information, without which the public is severely disadvantaged. the other side of the coin however is the miserable failure of the msm to actually investigate news stories, and publish them. The scaling back of investigatory reporting in recent years tells its own story.

The alternative media has filled the gap to a small extent, but they are not exempt from the criticism that they are highly selective in what they choose to report. I suggest people look at the US Project Censored, which publishes the top 25 most censored stories in the US each year. Some are unique to American concerns, but it is instructive to read the annual list and ask the question: how much did I read about this story in either the msm or the alternative media in Australia?

You surely can’t believe that having Tony Abbott directing his very own war movie with no cross-examination could be a good thing. Journalists are meant to get their “boots on the ground” so that they can weigh up how the visit was executed and received and so that they can ask questions in a genuine press conference on our behalf.

Yet another battle in the government’s war on transparency and accountability. On the other hand if msm had any courage of their convictions they’d refuse to interview the puppets presented to them, highlight how relevant ministers refuse to answer questions, hammer them when they give formulaic non-answers (Sarah Ferguson style) and refuse to redistribute PR statement and video releases. I won’t hold my breath, as courage and conviction are anomalies in the msm.