Taking out the trash. It’s a habit of governments and businesses to release bad news (or news that they want ignored) late on a Friday, but the Queensland government took it to the next level just before Christmas, announcing the expansion of the Acland coal mine at 6:15pm on the last Friday before Christmas. Activists against the mine say that the LNP wasn’t just trying to avoid the media in general, but one member in particular. Broadcaster Alan Jones has been a staunch opponent of the Acland mine — the town is where Jones grew up. Jones broadcast his last show of the year on Friday morning, hours before the announcement of the decision, which some activists claim had been made well before it was made public. We never thought we’d say it, but we’re looking forward to what Jones has to say when he’s back on air.

Victorian pollies get texty. Australian chambers of politics are often compared to schoolyards — and Ms Tips hears that in the case of one Victorian MLC this comparison is not completely unwarranted. When most of us (including Ms Tips) were already on holiday, the new Victorian upper house was sworn in on December 23, including a record five minor party members. We hear from a tipster that as the Australian Sex Party’s Fiona Patten took the affirmation of office, an MLC who was sitting in the chamber was texting his staffer at the ceremony, joking that Patten would be swearing on a vibrator instead of a bible. The language that was allegedly used in the following texts even made Ms Tips blush. We called Patten to ask how she felt about the messages, which she labelled “childish”. The Sex Party’s first representative in any parliament in the country, Patten said “it would take a lot more than that to get my back up” and that she is planning on having a bit of fun with the MLC in question. “I was hoping to drop the words into sentences in the future,” she said. The Sex Party isn’t taking much of a holiday at all, with Patten telling Crikey that she is meeting with Victorian Premier Daniel Andrews on Thursday to discuss the party’s efforts to introduce voluntary euthanasia in the state.

The return of yellow shirts? Not quite. We hear this from a tipster with an eye on the upcoming NSW election:

“Dr Arthur Chesterfield-Evans, a former Australian Democrat in the NSW Legislative Council, is attempting a political comeback. He has been selected as the Greens candidate to contest the blue ribbon seat of North Shore, currently held by Health Minister Jillian Skinner. A former president of the NSW Doctors Reform Society, Chesterfield-Evans is fiercely opposed to the smoking lobby and a vocal drugs and prisons reformer. He succeeded Dr Liz Kirkby in the upper house and served one term from 1998 to 2007. His tilt at the North Shore constituency has to be considered Mission Impossible. Melbourne-born Mrs Skinner has held the seat since 1994 with increased margins at every subsequent election. Educated at the Presbyterian Ladies’ College before starting a journalism career on the old Melbourne Herald, Mrs Skinner is now 70 years old. The only thing stopping her from winning the seat at the March 28 election is retirement.”

Time to test out sea legs. We hear this from a ship-watching tipster:

“Little wonder the Australian naval shipbuilding industry is in trouble. HMAS Canberra, apparently the biggest ship built for the navy, was officially commissioned just over a month ago. Since then it hasn’t moved from the dock at Woolloomooloo Bay, except for one period of about 24 hours (when I assume they took it for a spin around the block to recharge the battery!).”

Ms Tips thinks our tipster is a bit quick to criticise: it’s been just over a month since the HMAS Canberra — which is the biggest ship ever built for the navy — was commissioned, and it’s not the type of vehicle you can just take for a joyride. We asked the navy what was going on with the Canberra and were told:

“HMAS Canberra sailed from Garden Island, Sydney, in December to undertake a Mariner Skills Evaluation (MSE), which she successfully completed.  MSE checks a range of mariner competencies specific to maintaining the safety of the ship and ship’s company at sea. Canberra was tested on her ability to operate in a peace-time environment and overcome a range of potential emergencies.”

We also asked what the Navy is planning on doing with the HMAS Canberra in the near future and were told:

“Canberra will return to sea in January to commence training and to undertake further tests and trials to fully prepare the crew and to more fully understand the performance envelope of the ship. Once she has met readiness requirements, she will be made available for operational tasking as required.”

What a way to make a living. After the news that Australian industry groups were once again mounting an attack on penalty rates, one member of the public took it upon himself to test these businesses’ dedication to their line that penalty rates should be reduced or dropped. We hope he got paid time and a half for the calls. 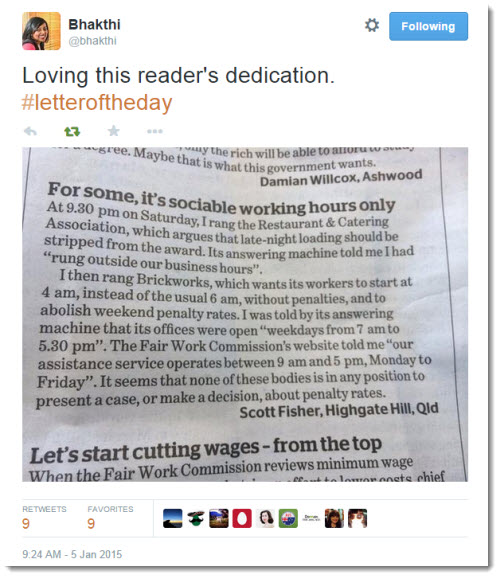 A blank canvas for Art Gallery of NSW? As reported in Crikey and elsewhere, last year was one to forget for the Art Gallery of NSW, with exhibitions that failed to inspire, and issues with staff changes behind the scenes. We hear from a tipster that the gallery may be on its way to a fresh start in 2015, with two new trustees appointed to the board:

“NSW Arts Minister Troy Grant has announced a changing of the guard among trustees of the Art Gallery of NSW. In place of Accor Hotel Group chief David Baffsky AO and Dr Lindy Lee, Grant has installed Professor Stephen Dowton, vice chancellor of Macquarie University, and Pakistani-born artist Khadim Ali from Western Sydney. Dowton, a paediatrician, clinical geneticist and molecular biologist, recommends himself to Grant, MP for Dubbo, because he was born in Ivanhoe and raised in Dubbo. Khadim Ali, a Hazara from Quetta, is a champion of arts training and more exhibitions in Sydney’s west, issues that are dear to Grant, a former police inspector, and Premier Mike Baird. Baffsky spent nine years as a trustee where he emerged as one of the principal advocates for the $400 million construction of Sydney Modern, a new gallery on the current AGNSW site in the Domain.”

Christmas with the Abbotts. In what is possibly the most disturbing use of #straya that Ms Tips has ever seen, Sydney councillor and sister of Prime Minister Tony Abbott tweeted this photo on Christmas day of her dear brother preparing the Christmas ham. We hope there was no deficit of supplies at the Abbott household… 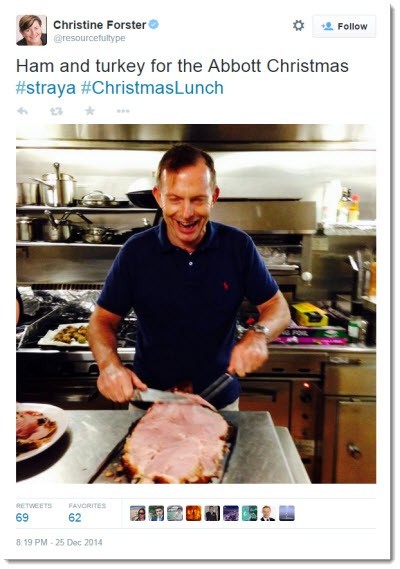