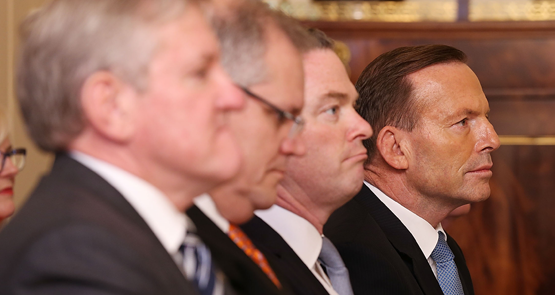 As Australia’s political class slumbers through the silly season, some of its members are placed to do so more restfully than others.

The electoral calendar for 2015 starts front-loaded with elections for two of the three biggest states, with — as best as we can tell at present — over a year of tranquility to follow, disturbed at most by the occasional byelection.

Thanks to the magic of fixed terms, election watchers can at least plan their leisure activities in advance to the extent of knowing that New South Wales will go to the polls on March 28.

However, Queensland is the last standing adherent to the ancien regime of unfixed three-year terms, together of course with the federal Parliament.

As of September, a “consensus of most government sources” related by Amy Remeikis of Fairfax held that the government would run the full three years with an election in late March.

But it seems the ground has shifted since then, with Alex Mitchell reporting in Crikey that “dates in February” were being considered. Depending on which Courier-Mail journalists you listen to, the election is either “expected in February”, or might instead be called “not long after Australia Day for a date in March” — presumably very early in March, lest voters’ patience be taxed longer than necessary.

Aside from their likely proximity in terms of timing, the looming state elections offer the striking parallel of two first-term conservative governments attempting to follow up the biggest electoral victories achieved in the modern history of their states.

As such, they promise to offer directly comparable insights into the electoral health of Abbottism, adding unusual nuance to the post-election federal-or-state factors blame game.

Looking to the federal sphere directly, the start of the year finds the Abbott government slightly less than half way through its term, with the next election due early in the second half of next year if the normal course of events is assumed.

But since normal courses of events in politics are so often disturbed by unforeseen crises and opportunities, the technical possibilities for election timing should always be kept in mind.

For what it may be worth, Phillip Adams took to Twitter on the weekend to advise of a “well-sourced rapid shifting of attitudes” within the Coalition, which was supposedly moving towards Julie Bishop taking over and calling a snap election.

Should that prove more than wishful thinking, the question would emerge as to what a new leader might favour out of two items on the menu: an election for the House of Representatives only, such as has not been held since 1972, or Australia’s seventh double dissolution, and the first since 1987.

It is generally reckoned that the government has a double dissolution trigger available in the shape of its bill to abolish the Clean Energy Finance Corporation, which was rejected for the requisite second time last June.

However, a view exists that this doesn’t count because it occurred before the senators elected in 2013 took their seats.

That might leave the Prime Minister unable to persuasively advise the Governor-General that a deadlock existed, such as the double dissolution mechanism was created to resolve.

For all the sound and fury since the Senate changeover in the middle of last year, the requirements for a trigger have not again been met.

After the government renegotiated its higher education reforms in November, it introduced the legislation in a form that prevented the rejection of its earlier bill from counting as the first stage of a trigger.

Speaking at the time, Education Minister Christopher Pyne offered that “we don’t want to have a double dissolution trigger” — a curious position, given that triggers incur no obligation to act upon them, and possessing them increases a government’s tactical options.

Whatever the rationale, one effect of preventing new triggers might be to limit the options available to any prospective rival after a successful leadership coup.

If a snap election were still favoured, the only thing for it would be to hold one for the House of Representatives only, requiring that a later half-Senate election be held at the appropriate time between the mid-points of 2016 and 2017 — presumably separately from yet another election for the House.

Neither approach would be likely to do much for the government’s position in the Senate. In electing 12 senators per state rather than six, a double dissolution election would lower the quota for election from 14.3% to 7.7%, effectively ensuring the election of at least one micro-party candidate per state.

A half-Senate election would amount to a national byelection, and presumably play out much like the special Senate election in Western Australia last April, at which the combined major-party vote failed to clear 60%.

It may still seem premature to be gaming for life after Tony Abbott, who will fairly clearly have little interest in an early election if left to his own devices. But it would hardly be the strangest thing to happen in federal politics if a sustained recurrence of his present disastrous polling caused events to slip beyond his control.

Double dissolution “threat”??
Are you guys for real?

It’s no surprise the most of the chatter about this comes from that left wing echo chamber aka Twitter.

Tony Abbott is not going to be rolled and there will be no double dissolution even though the left is wet dreaming about it almost daily. The reason is that though the left has a visceral hatred for Abbott, the government’s policy direction, getting the budget under control, will not change. And the Liberals don’t do palace coups, for good reason as demonstrated by shorten, Feeney Arbib et al.

If the next budget gets a similar rejection from an obstructionist senate like the last one did, the coalition can even go to the country labelling the deficit “Labor’s debt” again.

Curiously enough I agree with the somewhat less than balanced David Hand that Abbott will not be replaced or call a DD but not for the reasons that he has given in his predicable, boring and irrational rant.

The reason neither will happen is a lack of courage.

Abbott lacks the courage to call a DD

Nobody in the Liberal Party lacks the courage to actually challenge Abbott as is demonstrated by their servile acceptance to his Parental leave plan.

I remember the good old days when a key distinction between the ALP and the Libs was the independance of the Liberals.

The reason is that though the left has a visceral hatred for Abbott, the government’s policy direction, getting the budget under control, will not change.

Pull the other one, it’s got bells.

The mere suggestion this Government has the slightest interest in “getting the budget under control” is beyond absurd, given their their new spending commitments and complete lack of interest in addressing the revenue side despite the billions that could be recovered.

The left does have a visceral hatred for…
Inequity
Dishonesty
Fanatiicism
Religious dogmatism
Sexism
pandering to the top end of town.

hence the view on Abbott

Pav – shurley shome typo in your 4th sentence “Nobody … has the courage…”?
I seem to recall that initially Toxic was keen to tell all & sundry that he’d call a DD without hestitation if any of the IPA wish-list was blocked.
Is chrissy just ignorant – that he thinks DD triggers can be pulled by anyone other than the government?