Until the black boxes are recovered, endless speculation by so-called "experts" is pointless and cruel. 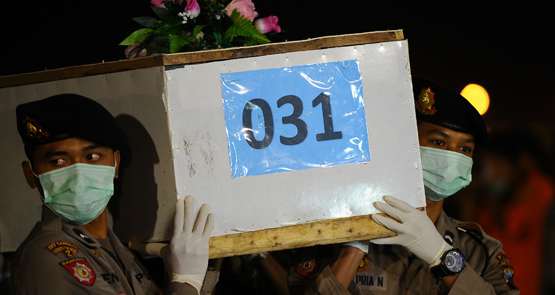 It’s just over eight days since AirAsia flight QZ8501 found itself pinned down by air traffic control under busy skies over the Java Sea and sought an escape from the strong turbulence at 32,000 feet by trying to climb to 38,000 feet.

There wasn’t much traffic at its bumpy lower altitude, but above, along its route from Surabaya to Singapore, it was a different story. It was a typically busy sky being flown by numerous inter-island regional and longer distance services.

As of this morning, all we know is that at least 34 bodies have been recovered from increasingly dispersed locations, and that there are indications of four or more substantial sections of wreckage in an area of the Java Sea that is, incidentally, a warship graveyard dating from World War II.

The vital black boxes have not yet been located. The cockpit voice recorder and the flight data recorder should be readily recoverable, once located, as the Java Sea is quite shallow.

Those recorders can answer a multitude of questions concerning the conduct of the flight, and allow conclusions to be made as to why it crashed.

Reasonable people reading the mainstream and technical media have, until now, had reason to be as confused as some of the “expert” commentators have been.

At their most hyperbolic, one scenario had the jet flying upwards and downwards with velocities resembling those of a multi-stage satellite-launched rocket as it passes through the 3000-4000 metre altitude zone on its way to orbit.

Another scenario had the jet, with varying degrees of pilot input, stalling and falling into the sea.

Then there was the incompatible scenario that suggested that the crew made a controlled landing on the sea surface and began deploying the evacuation slides before the A320 was swamped by waves.

All these scenarios are less shocking than some of the floundering commentary by “live” commentators on radio and television. The ABC gave time to commentary about control-freak Asian pilots with military training and autocratic tendencies, while Fox News blamed the disaster on the use of the metric system — which is even weirder when you consider that altitude continues to be navigated in feet, not metres.

Then there was the “A320 was too light for the task” line of commentary, also bizarre given that the structural certification requirements for airliners are the same regardless of their total mass or dimensions.

These embarrassments will hopefully fade when the data recorders are found and read, and the chances of this being achieved are high. Did a windscreen crack at the worst possible moment? Was a pilot incapacitated? Were the engines overwhelmed by water ingestion in the dense violent interior of a storm cell (which has happened in the past, but only rarely)?

The data recorders should tell us the answers. None of those answers will lessen the pain and loss of the families of AirAsia QZ8501’s dead. But they should stop some very silly things being said by media “experts”.

Unfortunately our media, in general, is now over balanced towards opinion rather than facts. Opinion must be cheaper to source.

From the perspective of the public the only credible area is court proceedings: lest they risk the wrath of the judiciary journos can only report facts while leaving their fanciful notions &/or theories of a case unspoken & unwritten.

Court reporting is a reminder of the good old days….only the facts.

I thought it was some kind of “Speculate or Perish” game – much like the carry-on over Monis and his “motivation”?

Is this sort of uniformed drivel not a result – and now driver – of the dead tree brigade needing to fill the space between ads and now being overwhelming due to all the epty digitty thangs on line?
“Facts are sacred” is so dated.

Very nicely put. Applies to so much reporting of so many events these days.