Seven's Sunrise has come in for a round of criticism over its (alleged lack of) coverage of the South Australian bushfires. And other media tidbits of the day.

Everyone’s a critic. Former Adelaide boy and Sunrise presenter David Koch is chairman of the Port Adelaide Football Club, and Seven is strongly dominant in the Adelaide ratings. But many South Australian viewers of the channel’s premier morning show have been put out by comments made on Sunrise that mentioned the “small grass fire” burning to Adelaide’s north-east. For the fourth day in a row the show’s social media pages have been flooded with comments from irate South Australians over what they perceive as the lack of respect and time given to the worst bushfires to ravage South Australia since Ash Wednesday, as the Country Fire Service has described them. 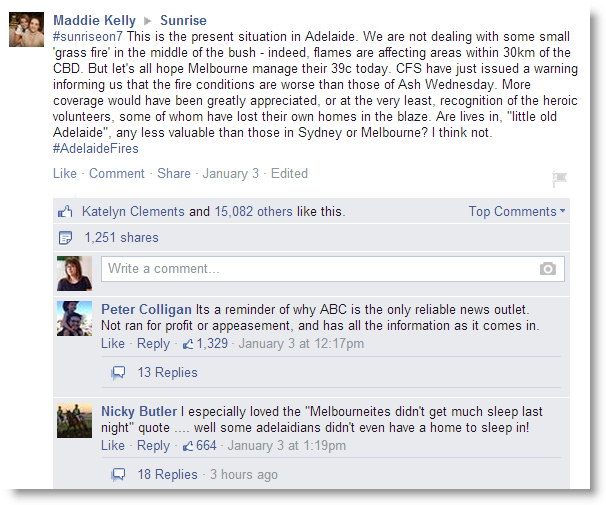 Weekend Sunrise extended its coverage on Sunday for 30 minutes into Adelaide, though not in other markets, and the story was prominent in bulletins on both days of the weekend and again this morning. — Myriam Robin

Happy New Year. Meanwhile, the ABC has also come in for a round of what is becoming traditional criticism over its New Year’s Eve broadcast. It’s not known why host Julia Zemiro ended the broadcast with an audible “thank God” as the credits rolled, but it certainly paved the way for complaints. “Last night the ABC proved it is completely incapable of broadcasting a live television event with even a tiny shred of the class or sophistication of a commercial broadcasting operation,” wrote Claire Harvey in The Daily Telegraph the following morning, offering step-by-step instructions on how the ABC could avoid future “embarrassments” (no more pub quizzes, no more backs of heads in frames etc).

It follows the criticism of 2013’s effort, which marked the first time the ABC had broadcast the fireworks after taking the rights to the event off Nine. “The ABC’s coverage of the New Year’s Eve celebrations has been slammed as a ‘train wreck’ amid a barrage of complaints about tasteless jokes, the lampooning of public figures and claims some on the show appeared to be affected by alcohol,” began the Tele‘s story at the time. It led to a full-throated defence from ABC director of television Richard Finlayson, who insisted his broadcaster had done a “terrific job”. He pointed to the ratings figures as proof of that.

From 2010 to 2012, the rights to the iconic Sydney fireworks were held by Channel Nine. When the station aired its December 31 special in 2012, it garnered 1.722 million viewers in the five capital cities in the 15 minutes following midnight. The most recent broadcast, on the ABC, had 1.372 million viewers for the midnight fireworks. It’s an improvement on last year’s effort, which had 1.27 million viewers in the five capital cities (but more viewers nationally than Nine’s coverage, criticised at the time as “Sydney-centric”).

It’s worth noting that shortly after midnight, Sky News was airing an interview with Bob Hawke on the recently released cabinet papers from his years in office. In case you were wondering whose broadcast was the most high-brow … — Myriam Robin

A rare vacancy. The Guardian advertises for its new editor-in-chief.

If you’re thinking of applying, or just curious, former editor Pete Preston wrote a piece last year on just what the process of appointing a new editor is. Staff get to vote on their preferred chief, with their preferred candidate appearing on a shortlist presented to the Scott Trust. Outgoing editor Alan Rusbridger was appointed after overwhelming support in a similar staff vote. — Myriam Robin 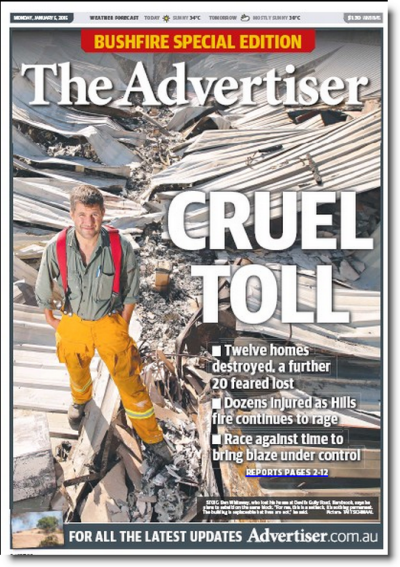 It follows the criticism of 2013’s effort, which marked the first time the ABC had broadcast the fireworks after taking the rights to the event off Nine.

Can someone elaborate on the legal basis of broadcast “rights” over a live public event ?

ABC24’s coverage of the bushfires was excellent.

So it would appear Koch is a cock. What a surprise.