Pauline Hanson, former fish and chip shop owner, Dancing with the Stars finalist and unironic user of the term “reverse racism” has recently announced her return as leader of One Nation after a 12-year hiatus — although she has run for a number of state seats as an independent during that time. Hanson, founder of the far-Right One Nation political party in 1997, has been labelled populist, protectionist and anti-globalisation on better days, racist on worse ones.

While the trumpeters of One Nation herald her glorious return in an effort to win a seat during next year’s Queensland state election, let us now take a moment to look at the wonderful tapestry that is Pauline Hanson’s political career.

In a “special message” on the One Nation website about her decision to return to political life, Hanson said she felt “terribly concerned for Australia when first in Parliament, but more so now”. She further added:

“We are witnessing large amounts of our prime farming land and housing sold to foreign ownership. The push for multiculturalism is only segregating us as a nation and not uniting us as Australians with the same values, beliefs and laws. Halal is being forced on us by 2% of the population.”

Will stopping halal food be the platform One Nation runs on? Maybe, maybe not; an online group called, “Boycott Halal in Australia” has more than 36,000 members. So it might be worth the votes for Hanson.

In a 2004 interview with Andrew Denton, Hanson hold him what she thought about free speech in Australia:

“You know, what annoys me so much is the Australian people are being suppressed in their views and their opinions by policies and legislation set down by our so-called parliamentarians. Why the hell did they bring in a religious and, um … racial and religious vilification law that shuts Australians down from having an opinion? I have a right to have an opinion. But I’m being shut down.”

Hanson, appearing on one of the most popular and respected shows on the ABC, voiced her opinion that she was being barred from having an opinion — on a show totally dedicated to hearing people’s opinions. Go figure.

While One Nation, at its peak, gained 9% of the national vote in the 1998 Australian federal election, it would never see that kind of success again. The reason was the Liberals, according to Hanson anyway:

“It has been widely recognised by all, including the media, that John Howard sailed home on One Nation policies. In short, if we were not around, John Howard would not have made the decisions he did.”

This was the same man who, just a short time ago, she hailed as a “strong leader”.

Hanson attacked AIDS and the people who suffer from AIDS during a statement made in 2006, when she was considering a return to politics.

“We’re bringing in people from South Africa at the moment. There’s a huge amount coming into Australia, who have diseases; they’ve got AIDS.”

But that’s not all. Hanson went on to say:

“They are of no benefit to this country whatsoever; they’ll never be able to work. And what my main concern is: is the diseases that they’re bringing in and yet no one is saying or doing anything about it.”

Suggesting that the majority of South African migrants to Australia have AIDS? We can’t wait to hear what she thinks about Ebola.

Hanson’s maiden speech to federal Parliament is a textbook example of what not to say in public or polite company.

Hanson, despite typifying a well-off, successful Australian, felt it important to bring up just how unfair it was to her to be constantly reminded that white settlement was a traumatic event for indigenous Australians:

“I am fed up with being told, ‘This is our land’. Well, where the hell do I go? I was born here, and so were my parents and children. I will work beside anyone and they will be my equal, but I draw the line when told I must pay and continue paying for something that happened over 200 years ago.”

Somehow, this isn’t the worst part of her address to Parliament.

“I and most Australians want our immigration policy radically reviewed and that of multiculturalism abolished. I believe we are in danger of being swamped by Asians. Between 1984 and 1995, 40% of all migrants coming into this country were of Asian origin. They have their own culture and religion, form ghettos and do not assimilate. Of course, I will be called racist, but if I can invite whom I want into my home, then I should have the right to have a say in who comes into my country. A truly multicultural country can never be strong or united.”

Hanson was right; many people did call her racist. Many still do.

During the same speech, Hanson also made the comment about “reverse racism”:

“We now have a situation where a type of reverse racism is applied to mainstream Australians by those who promote political correctness and those who control the various taxpayer-funded ‘industries’ that flourish in our society servicing Aboriginals, multiculturalists and a host of other minority groups.”

During an interview with Fairfax Radio Network, Hanson made a comment that was both simple and odd: “I’m not racist.” While definitely not the most offensive thing she’s ever said, it was one of the most puzzling.

The question of Hanson’s racism is still debated today, with academic papers written on the matter.

Pauline Hanson knew she was a controversial figure. Prompted by her colleagues, she recorded a video in case of her assassination. The video, filmed in 1997, is hard to find, but excerpts do exist:

“Fellow Australians, if you are seeing me now, it means that I have been murdered. Do not let my passing distract you for even a moment … For the sake of our children and our children’s children, you must fight on.”

Fight on for what exactly? We don’t know and, frankly, we’re not sure we want to know.

In 1996, 60 Minutes ran a story titled “The Hanson Phenomenon”. During the interview, Tracey Curro asked Hanson if she was in fact, xenophobic. Hanson’s reply was notoriously simple: “Please explain?”

The response become linked with Hanson and penetrated Australian pop culture for years to come. In fact, it became so infamous that it reached the Australian top 10 charts after it was appropriated by satirical character Pauline Pantsdown, played by Simon Hunt, in the (very) catchy song I Don’t Like It.

‘Love Australia or Leave’ is now a political party 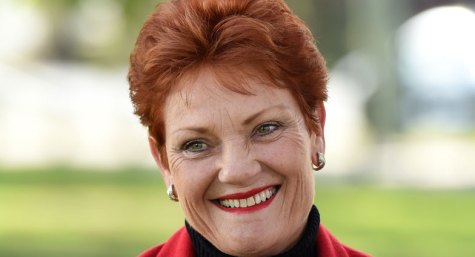 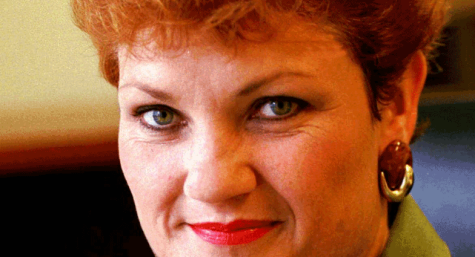 The world according to Pauline (starring the lesbian Asian cyborg president)

It’s true, she was like the face of Australian politics we don’t see, the words that are never spoken, the kinds of impulses our mainstream politicians have that can’t be voiced because they will be silenced by the other mainstream. She was like the face of the Other Australia. It was as if the party that wanted to be loved had no way to be these things, and so invented this character – Pauline, a fish-and-ship-chop shrew, who could do it for them. She was like an empty vessel that could be filled with all the goodies that were no longer kosher on the table. Pauline, she was everyone’s baser instincts, she was like Base Intentions, Bottled.

We had of course had our Rona Joyners and Mary Whitehouses. But Pauline, Pauline was something else. She was a political machine, she could walk and talk and smile and kiss babies with the best of them. She was like the Ninety-nine to Chaos’ Max. She was like one of those great tv shows from the eighties – the bionic man, the bionic man, possibly the hulk, fitted with the latest in political technology. Awaking to find herself a fighting frighting machine in a world of bewildering nuance. Will there ever be another Pauline?

Haven’t you been paying attention?:
https://www.facebook.com/paulinepantsdown666

Wonder which of her current policies the libs will need to adopt this time around if she builds up a head of steam.

Maybe, despite her anti-globalisation stance, she has been keeping a close eye on that UKIP lot in the UK?
They seem to have incorporated much of Hanson’s agenda, and are doing well in that country.
Surely we don’t want to go down that path again. What have we become?