Finally, we are addressing ABC bias

Crikey readers talk the ABC, people smugglers and why Tassie should host its own G21.

Richard Davoren writes: Re. “Poor week for the government, but will Lambie make life easier?” (Friday). Your commentator had me thinking. Tasmania, if we play our cards right, will soon become the financial and political epicentre of Australia, possibly the world. Forget Sydney and Melbourne. Already Tony Abbott confuses us with China, he sees Tasmania in a new light, powerful, innovative and highly productive. We could be part of the G21 with little effort.

We have our potential leader, “Queen Jacqui I”. Senator David Leyonhjelm said recently: “If she joined in a voting bloc that would give us leverage because three is the magic number. If you’ve got three votes you could say to the government, ‘No, I won’t support that unless you change it’.” Go for it, Jacqui. She overpowered Clive, so whipping a new team of senators into her way of thinking, would be a pushover.

So far we have achieved world recognition and potentially, power over the Australian government. Raising wealth should be simple. Ironically, we have the same population as Luxembourg: 500,000. If they can do it, so can we.

We could adopt a similar marketing strategy to Luxembourg’s, but because Tasmanians have learned to live on the smell of an oil rag, not even a decent ferry service to Victoria and the lowest wages in Australia, we would run a leaner operation and offer companies like Google or even the Future Fund, sharper rates. We may need to succeed from Australia at some time, because Joe Hockey will want to milk our wealth, but I am sure Queen Jacqui can sort that out. She has a way with wealthy men.

Greg Clancy writes: Re. “Crikey Clarifier: why did Scott Morrison cancel asylum seeker applications from Indonesia?” (Wednesday). It amazes me that journalists still don’t understand the ‘boats’ from Indonesia issue. I have studied this problem for almost 20 years and have written two books explaining how the system works.

The people smugglers operating out of Indonesia during the past 15 years have had a product for sale — an open-ended back door immigration passage into Australia. They have had little interest in refugees unless they have the money. Most arrivals into Australia via the Indonesian route may have had a tough time, but they are not refugees. What they effectively do is keep the real refugees out.

The Abbott government has delivered some tough decisions in its boat policy, but it is correct in doing so. It’s called making a decision, something Labor was incapable of and the Greens, well, on this matter, they are simply not on the planet.

Time to crack down on ABC bias

John Shailer writes: Re. “How much of the Murdoch agenda has the government delivered?” (yesterday). Finally Malcolm Turnbull is cracking down on the the inefficiencies and lack of balance at the ABC with it’s apparent mission statement to bring down the Coalition government.   Examples include the indefensible skit mocking the MH17 deaths of 27 Australians; the hostile questioning and  interrupting of Coalition ministers;Q&A has become a parody of a balanced political forum.  Mark Scott has left the lunatics in charge of the asylum.  Ultimately an efficient and balanced ABC is in the interests of all Australians.

The boats have stopped 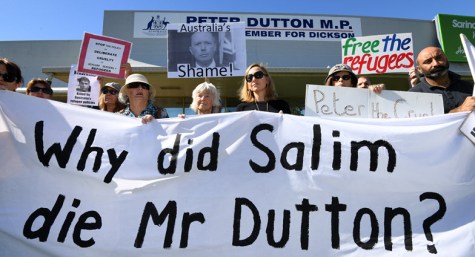 The ‘stop the boats’ mantra was never about saving lives

One of the two books Greg Clancy has written on people smuggling appears to be his 2012 novel ‘the People Trafficker’, which reads like a telephone book.

Reliant as we are on viewsmedia for our news/information, all media makes mistakes – some more than others.
Who produced that “Utegate skit”?
Who chose to ignore “Children Overboard” for days, before jumping in to handle the fall-out, three days before an election; before touting Howard, Reith & Co on it’s eve?
“Bias”? Try watching the ABC at least once when Labor and the Greens have made themselves available for interview by Sales or Alberici in particular? Sales vs Chris Evans are “classic inoculants” – almost as “mustn’t miss TV” as that “grab-bag” moment with Plibersek? Lane’s personal endorsement of Bishop’s commitment to “ruling by the book”, on the night of her ascension to the Speaker’s throne?
But, on the other Hand, Q&A has always been a parody of political debate – how often have we had professional conservatives outnumbering professional Left panellists/Murdoch’s LNP-Mart catalogue employees on, to back up members of the Limited News Party?
Just because Rumpole Turnball labels the show an “Abbott hate-fest” when faced with Ben Elton’s critique …. remember how funny, fashionable and all Right it’s been to be “Rudd/Gillard Haters”?

How come most asylum seekers coming here to Australia via boat have been given refugee status by the UNHCR or the Australian Government?

I suppose you use your OWN criteria for judgement at arm’s length, so to speak.

And tonight, those “Lefties at the ABC”? Catch Lateline?
The AFR’s Coorey and Murdoch/Abbott news alter boy Sheridan on with Emma Overici – with her two Right sleeves – playing Dorothy Dix?
[They can get rid of Lateline all together – we can get that sort of “one-eyed personal analysis” in our viewspapers if we want to pay for it – now the ABC is giving it away for free.]