Yes, I hate the Cup — and for damn good reason

The horseracing industry is cruel, exploitative, unsafe and reliant on organised crime and rentseeking. It shouldn't be celebrated.

One of the most painful aspects of the Melbourne Cup is its intensely formulaic nature. Painful, that is, for humans; if you’re one of the “equine athletes” (yes, the racing industry actually uses that term) forced to take part in being flogged around a paddock for the pleasure of 100,000 drunken halfwits, there’s an altogether more immediate pain involved. But for those of us merely forced to endure it from afar, what sticks in the craw most is the kabuki-like repetition of proceedings every year, with only the beasts’ names being altered. Otherwise, it’s the same coverage, the same relentless banality, the same clichés, the same stock photos of young women (sorry — “fillies”) wearing the same silly frocks and shit in their hair, the same lame jokes, the same post-race pictures of racegoers lying passed out, vomit-spattered formal wear akimbo, the same touching story of how Jockey X overcame tragedy/scepticism/something-or-other mildly inconvenient to achieve victory.

But one way in which the annual Cup ritual is changing is that, slowly, the wretchedly cruel nature of horseracing is receiving more and more coverage. My own conversion on this was as a Year 8 student crowded into what was called “the video room” at high school to watch the 1981 Cup, at which hot favourite Dulcify came last (how we easily amused 13-year-olds laughed at that Tall Poppy moment) and was afterward euthanased with a broken pelvis. While the media could only discuss the winner, I could only contemplate the fate of the animal killed during the course of such a celebrated event. In the ensuing decades, the death toll from horseracing has become ever more apparent and subject to public comment, until the point where a token article on the toll of horseracing is now part of most Cup coverage. There’s also the infliction of pain on horses via whipping, an action that would see the perpetrator fined or jailed off a racecourse but not merely approved of but encouraged on one. Racing fans dismiss such concerns as needless, declaring that horses are “creatures of flight” and “love to run”, an argument I’m happy to accept the moment they produce a signed consent form from a horse.

Society, of course, readily approves of killing animals, because most people are meateaters. Humans don’t need to eat meat, but Australians it anyway, and thus help fund the killing of and cruelty to animals purely for their own pleasure, even if horses are somewhat higher up the literal foodchain in the eyes of humans — not quite livestock, but not quite pets that we wouldn’t dream of chucking on a BBQ. But betting and getting on the piss are even less necessary to living than eating meat — and even the most debauched meals of meateaters don’t usually feature drunken corporate executives ending their careers with a grope or dancefloor-sprawl in a Flemington marquee.

In any event, if the objections of hoity-toity chattering class latte-sipping inner-city don’t-enjoy-a-beer-and-a-punt-on-the-geegees types to the wanton cruelty of horseracing don’t turn you off, its appalling rentseeking should. For all the image of glitz and high… well, medium-fashion, the horseracing industry is massively subsidised by taxpayers, usually by state governments, to the tune of millions of dollars. In 2012, the supposedly cash-strapped Newman government in Queensland, while slashing funding for other government services, gave a remarkable $110 million to racing in Queensland. Despite the NSW government handing millions of dollars to the NSW racing industry, the latter still complained about not getting enough money — and it looks as though the Baird government will come through, with an $80-100 million windfall for the industry. The Victorian Auditor-General last year examined a program that had given the racing industry in Victoria $40 million and found it riddled with administrative problems, with no one having the faintest idea whether the money was having any benefit. The Victorian Racing Club in its annual report proudly refers to support from the state government, but good luck finding the level of support quantified in its financial statements — although its 2010 annual report mentioned a glamorous $60 million in handouts to the industry.

Now, taxpayer support for an industry that systematically inflicts cruelty on animals is one thing, but where would horseracing be without organised crime? The racing industry is crucial to the ability of criminals to launder money via owning racehorses — indeed, the federal money laundering agency AUSTRAC last year provided a step-by-step diagrammatic guide to how organised crime uses the horseracing industry to launder the proceeds of crime. And that’s before you get to the common problem of racefixing.

Oh, but wait, like a drunken racegoer throwing up on the bus home, there’s more. Horseracing doesn’t just kill horses, but jockeys as well: the recent death of apprentice Caitlin Forrest in South Australia was the fourth fatality in just over a year, all female jockeys. In fact, horseracing is one of the most lethal workplaces per employee in Australia, a 2009 study found, second only to ocean fishing. Exploitation of jockeys and other members of the industry workforce is also rife, fueled by the popularity of the industry with people who enjoy working with horses.

So, let’s chow down on a listeria-ridden chicken drumstick and raise a glass of carbonated cat’s piss to the cruel, unsafe, rentseeking industry reliant on organised crime and exploitation of its workers that stops a nation. Hope you pick a winner. 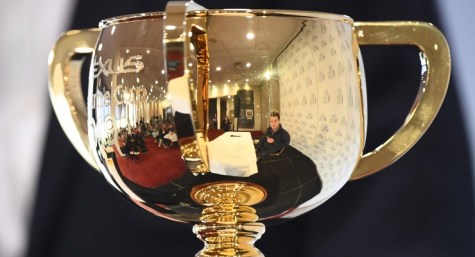 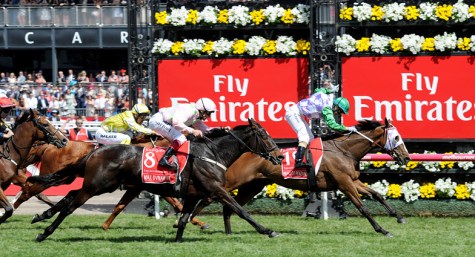 Well put Bernard, I couldn’t have said it half as well! except that I’ve been vegan for a few decades in an effort not to add hypocrisy to my other failings.

I’m with you 100%, Bernard. I decided this year I was not going to take part in the sweeps and won’t be there to see the poor animals get flogged.

A the risk of seeming a wet blanket I’d rather just not be part of the hysteria.

Yes, it is just that – a tax-funded pageant of obscene cruelty and liquored up bogans.

What to say, I feel ashamed to be part of a community that can do this. I don’t bet, but have done in the past.

What can we collectively do to stop this abuse to animals and use of tax payers dollars?