Former Pakistani MP Raheel Qazi believes a woman's first priority should be her family and that Malala Yousafzai's goal of a secular Pakistan should never be realised.

“But this is discrimination!” Samia Raheel Qazi said when told about the new Australian regulation forcing Muslim women with veiled faces to sit in a glassed-off area of the public gallery when visiting Parliament House. “You are allowing a woman with bikini, with nude in your Parliament but you are not allowing a woman with a covered face to sit in a Parliament. So I think this is discrimination, and I protest on it.”

Raheel Qazi has her own experience of parliamentary face-veiling. When she was appointed as a member of Pakistan’s National Assembly under newly introduced gender quotas in 2002, she was told that she would need to be photographed with an uncovered face for her parliamentary ID card.

“But they allow us because I protest on it. It is my religious obligation, yes? I don’t agree that if you don’t cover your face, you are not a good Muslim. It is not good and bad Muslim — it is my choice. I belong to a religious and political party whose workers believe that their leader should be with a covered face. But at the same time, my daughter is not covering her face. We both have choices — to cover or to cover not.”

Qazi spends most of her working life in female-only spaces where her face is uncovered, but even in mixed-gender settings, her charisma beams straight through her veil. And she is clearly an intelligent and highly educated woman who wrote her PhD thesis on Islam and the family. She is a widow whose own daughter is now 22 years old and studying in medical school. Her decision to veil her face has proved no impediment to her participation in public life.

Qazi is a senior leader of the women’s wing of Pakistan’s Jamaat-e-Islami and the daughter of its late emir Qazi Hussain Ahmad. As such, she supports her party’s hardline stance towards any reform or repeal of Pakistan’s Hudood Ordinances, whose most notorious effect has been the jailing of legions of Pakistani women for illicit sex. According to the Jamaat-e-Islami, the ordinances are “God’s law”, not human law, and therefore cannot be overturned. Qazi concedes that women have suffered injustice under the ordinances, but claims that this is due not to the ordinances themselves but to problems arising from their implementation. “So if we need reform, then it is only in the implementation.”

Qazi’s own party opposed the introduction of the gender-based quota under which she was appointed to the National Assembly — a stance she still endorses. “I don’t support quota because it is discrimination against men. And it is not the basic democratic norms.” At the time of her appointment, she was quoted in the Pakistani media as saying that “women were created to make human beings, not governments”. It’s a quote that she now denies having given.

More recently, Malala Yousafzai’s autobiography, I am Malala, describes Qazi as “one of the most vocal people against me” in the wake of her shooting by the Taliban. “She called me an American stooge and showed a photograph of me sitting next to Ambassador Richard Holbrooke as evidence of me ‘hobnobbing with US military authority!’”

Qazi is now swift to congratulate Malala on becoming the world’s youngest every Nobel laureate, but adds:

“Still it is a controversial because in Pakistan they don’t believe it is for what she did for education or for any other reasons. They are asking what is the main reason. It is cosmetic. She is the daughter of the nation and we are proud of her, that she won the Nobel prize, but at the same time Pakistanis, most of the Pakistani nation believe what is the special thing for Malala.

“Personally I have no clash with Malala — she is like my daughter, yes? And she wrote about me in her book, that I opposed her. I don’t oppose her. I opposed the ideology in which the daughter of the nation, they took her abroad and they symbolised her as a secular face of Pakistan. There is no chance for secularism in this country because it is 97% Muslim.”

Patriarchal organisations such as the Jamaat-e-Islami could not be maintained without the active support of women like Qazi who are happy to undertake the role of enforcing their norms and regulations. By dismissing such women as puppets of their menfolk or as deluded victims of false consciousness, we overlook a crucial factor in their movements’ power structure — the women themselves. 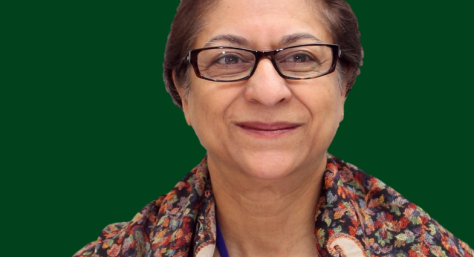 The problem in Pakistan lies exactly in this quote: “the ordinances are “God’s law”, not human law, and therefore cannot be overturned”

Who determines what exactly is God’s law? Who interprets this and with what preconceptions and motivations? Can you really trust them? I’ve read much of the Koran, it’s like most religious texts: anachronistic, inconsistent and often incoherent, which gives interpreters plenty of slack to make up the rules to suit their agenda.

Human law may be fallible but at least it can be overturned. That is a secular state’s real strength. We can change as circumstances and society need. When an injustice is seen to happen there is a way to change the laws to avoid that injustice. We are not bound by the will of those who proclaim that they speak for some greater being and derive ultimate power from that claim.

I really don’t know what to make of women like this – I feel as if they are setting back the cause of women’s rights by 100’s of years. I found this article very frustrating to read.
and I endorse your comments Stuart Coyle.

“You are allowing a woman with bikini, with nude in your Parliament”. Really?

>> Patriarchal organisations such as the Jamaat-e-Islami could not be maintained without the active support of women like Qazi who are happy to undertake the role of enforcing their norms and regulations. <<

is this satire or for real.