The government’s determination to rush through a free trade agreement with South Korea has produced a bizarre and overlooked anomaly in relation to employment provisions that opens the door to virtually any Korean workers in Australia but subjects Australians wanting to work in Korea to almost punitive levels of vetting. The disparity appears to have escaped the notice of the Joint Standing Committee on Treaties, which ticked off on the treaty in September on the basis that it would “provide substantial economic benefit”.

Bilateral free trade agreements were excoriated by the Productivity Commission in 2010, when a comprehensive review by the PC showed they had at best “modest” benefits for national income, that there was no evidence of benefits to business, that they risked delaying beneficial domestic reforms and, in the case of intellectual property provisions, that they “clearly imposed a net cost on the Australian economy”. Nonetheless, the Coalition in both the Howard and Abbott governments appears obsessed with them, repeatedly rushing through hastily negotiated agreements as a king of status symbol of economic management.

But the government’s haste to sign off on a deal with South Korea has produced a particularly absurd disparity in relation to “movement of natural persons” chapter. That chapter purports to be about a “mutual desire to facilitate temporary entry for business persons on a reciprocal basis”, but reading the details of the agreement makes it clear the desire is rather less than mutual.

Under the agreement, and reflecting similar language in other FTAs, Australia has committed to allowing in four categories of Korean workers: “business visitors”, who can remain from three to six months, “independent executives” coming to establish a Korean business in Australia, who can remain for two years, and “intra-corporate transferees” who can remain for up to four years but who must be “an executive or a senior manager” or “a specialist … with advanced trade, technical or professional skills and experience who must be assessed as having the necessary qualifications”, who has to have worked for the Korean parent company for two years before coming to Australia.

“Anyone using Australian workers in Korea may be required to undertake labour market testing (checking to see if the job can be done by locals) — which Korean contractual service suppliers won’t face in Australia.”

The language of this 457 visa-style category is interesting. In Australia’s free trade agreement with Chile, for example, which was negotiated by the Rudd government, the relevant section refers to “contractual service suppliers” as people with “high level technical or professional qualifications, skills and experience”. That is, the threshold for entry by Koreans working for Korean firms offering services to Australian companies is substantially lower when it comes to technical or professional qualifications than for Chilean firms.

Being an FTA, you’d assume South Korea had agreed to open its labour market to Australians in the same manner, complete with lower standards than in other trade agreements. Not so. In fact, South Korea insisted on a range of restrictions on Australians working in South Korea. Intra-corporate transferee “specialists” must possess “knowledge at an advanced level of continued expertise and proprietary knowledge on the services, research, equipment, techniques, or management of the organisation”. “Contractual service suppliers” from Australia face a list of requirements, including that they have worked for their employer for a year before working in Korea, must be “employed or engaged in a specialised occupation that requires theoretical and practical application of specialised knowledge” as well as “the necessary academic and professional qualifications and professionally qualified competency-based experience to perform an activity in the sector”. Most of all, anyone using Australian workers in Korea may be required to undertake labour market testing (checking to see if the job can be done by locals) — which Korean contractual service suppliers won’t face in Australia. Australian workers who want to work in Korea could also face arbitrary numerical restriction.

Oh, and there’s one more restriction that applies to every Australian working in Korea:

“Korea may refuse to grant temporary entry to a natural person who is likely to be involved in any labour dispute that is in progress and adversely affect the settlement of such labour dispute.”

So don’t bring your bolshie workers to Korea, mate.

The JSCOT was unfazed by, or didn’t notice, the huge disparity, devoting just three paragraphs to movement of people in its report in September. Labor’s Alannah MacTiernan, however had spotted it, telling Parliament of the “extraordinary asymmetry” between Korea and Australia, especially compared to other agreements like the Chile deal. “We have now opened up a huge capacity for people — and not just for Korean companies but for other companies — to just import, wholesale, people from Korea without any regard to unemployment in Australia,” she told Parliament.

Of course, ignoring the impact on unemployment from an economic efficiency point of view, South Korea retaining protectionist labour market mechanisms while Australia opens its doors to Korean labour is a win for Australian businesses compared to their Korean counterparts. But it’s yet another example of how absurdly inapt the term “free trade agreement” is. 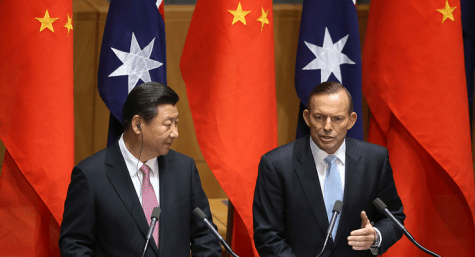 Free trade is a belief system. It does not require evidence.

Bernard, your article clarified several aspects with which I’d been struggling, so thanks. Am I correct in believing that some of the disparity is less significant because, for example, Korea’s qualifications barriers are for highly skilled technical categories and wouldn’t affect significantly manual workers who are unlikely to be as interested in moving there as their Korean counterparts are to move here?
Wouldn’t your amusing reference to a “bolshie” possibly wanting to work in Korea be an understandable concern to Korean employers since he’d be reducing his income to go there?

Who needs fine-print when you get headlines?

Neutral is an interesting nom de blog, but if one wishes to deserve it then might it might be a good idea to research helpful topics such as philosophy of language or even epistemology?
The Humpty Dumpty ‘Philosophy’ might well settle the question by simply asserting the word will mean whatever I say it means, but that makes analysis subsequent meaningless.