An end for the King’s Tribune: ‘It came down to money’

One of Melbourne's most well-respected independent media outlets is closing down, after a change in editor Jane Gilmore's personal circumstances.

“I’m more sad about this than I can say, I’ve fought for years to keep The Tribune going, but the combination of time and money it requires to do that has become more than I can manage.”

The King’s Tribune was started in November 2007 by Gilmore and Justin Shaw, neither of whom were journalists. It was originally as a bar newsletter for Elwood wine bar The King of Tonga. What began as a double-sided A4 page filled with local news, gossip and views on the broader world quickly spilled out of the bar and onto the streets of St Kilda and Elwood. Growth was fast — within a few months it was being distributed around cafes, bars and laundromats. Within a year, it had a website. And by 2010, it was a print magazine with a cover price of $8.95. A decision was made at this point to focus on subscriptions as opposed to advertising to fund the publication. Advertisers were uneasy about a publication writing on controversial topics, and with no one to manage the commercial side of the business, the publication stopped selling ads to avoid the ethical problems of having an editor who also sold advertising space. The publication in recent years has funded itself entirely through subscriptions, with top-ups of Gilmore’s own capital.

The Tribune’s subscription base grew only slowly — it has nearly 1000 subscribers now — but it had a far larger readership of 60,000 unique readers a month which included many journalists and writers. The Tribune had a reputation for publishing smart, well-edited writing by voices that were generally unknown. Several of those voices have gone on to mainstream media success, such as Paula Matthewson (more commonly known by the pen name Dragonista) and Rebecca Shaw (pen name Brocklesnitch). Several well-known bloggers and independent media mainstays also wrote for the Tribune, including Amy Gray, Tim Dunlop, cartoonist Andrew Marlton (aka First Dog on the Moon) and satirist Ben Pobjie. As Gilmore described it to Crikey in 2011, the publication was “what would happen if The Monthly and The Onion got together in a bar”.

Gray was a freelance writer who’d been published in several other more established outlets before she began writing for the Tribune. A regular voice on the publication since, she told Crikey she had been drawn to the Tribune’s openness to experimentation. “I could pitch a piece about a bizarre period in Vatican history and its relationship to today and wrangle a piece out of that. If I tried that at other publishers, they’d be more reticent. The Tribune was so open to ideas. It was the most supportive publisher I’ve ever worked with”.

Gray also reserved particular praise for Gilmore, who she said was a fantastically collaborative editor with a brilliant feel for online media. “She had a really clear vision for what she wanted the publication to be. I’m incredibly sad to see it go.”

Like many independent media outlets, the King’s Tribune was held together by the efforts of its editor and owner. A change in Gilmore’s personal circumstances meant she could no longer shoulder the burden, she told Crikey yesterday. “It came down to money. It was something I always enjoyed doing and I would have kept going with it. The Tribune was never enough in itself to pay its writers and to pay for my life, so I did other work to keep going. But my income from that other work changed recently and there wasn’t enough money left over.”

In her statement to readers, Gilmore said she intended to leave the Tribune’s website up, and would remain open to publishing those who were interested if they approached her. “I’m heartbroken over what’s happened. So I can’t bring myself to finish it properly,” she said. “I’ll still write myself. But I’m very wary of publishing people without paying them. I’m not sure how I’d manage that. It’s dangerous territory, and not something I want to encourage.”

Gilmore is a huge supporter of independent media, and says this is part of what makes the demise of the Tribune so sad for her. “Independent media is so crucial. With the Murdoch-owned press so dominant, there’s a lack of intelligent, common-sense journalism with no commercial agenda. Apart from my own heartbreak, I think any loss in independent media is a shame.” Because of this she says she glad to see New Matilda, another of Australia’s small independent media outlets, survive despite flirting with closure earlier this year.

Speaking to a group of new media entrepreneurs gathered by Melbourne University in May, Gilmore urged them to treat readers with respect. “Loyalty is the key to keeping the relationship strong. It will forgive and survive mistakes, but contempt will kill it dead,” she said.

She thinks this is a large part of why the Tribune was so well-loved by its readers.”We managed to pull together a mix of humour and thoughtful analysis. We never did clickbait. We talked to our readers know they were intelligent thoughtful people. We treated our readers with respect, and loved what we were doing. We’d always choose to not publish rather than publish something that wasn’t good enough.”

Gilmore added another lesson for success in independent media. “Running a publication like the Tribune needs more than good editing and good writing, and popularity,” she said yesterday. “It needs selling skills. You need to be able to sell subscriptions and push that properly. We didn’t have anyone to do that. I think I was a good editor, and we had brilliant writers. But we never had that.” 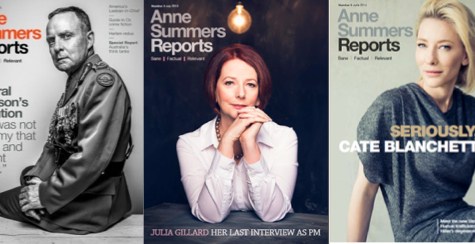 New Kid on the Block: The King’s Tribune

Nice piece Miriam. Yesterday was a bloody sad day for all concerned.

I am ashamed that I didn’t subscribe. So very sorry to see it go. Good luck to Jane for the future.