If Fairfax is about to merge, why isn't the sharemarket more excited? And other media tidbits of the day.

Fairfax merging? The market doesn’t think so. If you believe its media rivals, someone is eyeing up Fairfax Media — the talk in the Sydney media industry of a looming deal just won’t go away. But perhaps the eager beavers spruiking such a move would be better placed watching the sharemarket, where there’s no sign of a deal. In fact, Fairfax Media shares slumped 4.1% on Monday to end at 81.5 cents. That took the fall in the past five trading days to 6%. When the company revealed its 2014 results on August 14 the shares were around 91.5 cents. That makes the fall to Monday just over 10% — not the sign of insider knowledge of a looming deal involving Fairfax in a usually leaky industry where inside knowledge is rife.

The most logical candidate is Nine Entertainment, Fairfax’s putative video streaming partner (although Nine will have to spend a lot of money obtaining third-party rights to much of its programming it doesn’t control, and Nine doesn’t control very much, unlike rival Seven). But Nine’s David Gyngell has made it clear he’s not interested in Fairfax if the declining print operations are included in any proposed deal. So if a deal is to be done with anyone, bar a charity, look for Fairfax to follow American publishers and spin out its print business into an orphan company. — Glenn Dyer

Murdochian hypocrisy. Free-to-air TV companies in Australia, the UK and Germany last night launched a campaign to get pay TV operators to start paying for retransmitting the free-to-air signals — as they have done so in the US since 2005. And in each of the cases, the major or monopoly pay TV operator  in each of the three markets is controlled by the Murdoch clan: News Corp in Australia, which controls the management of Foxtel and shares ownership with Telstra; BSkyB in Britain, 39% owned by 21st Century Fox; and Sky Deutschland in Germany, which is in the process of being taken over by BSkyB. While it’s not the first time free-to-air broadcasters have called for the payment of retransmission fees, this one is the most serious, with the free-to-air groups commissioning a report on what happens in the US TV industry to back the call.

Naturally the call has been strongly opposed by Foxtel in Australia and BSkyB in the UK. The Foxtel/BSkyB reactions fail to reveal that News Corp and 21st Century Fox both are controlled by the Murdoch clan, and since 2005 they and their managers, led by Chase Carey, president and chief operating officer of Fox, have been among the strongest supporters of pay TV paying free-to-air companies for retransmitting their signals in the US.

The report, written by Jeffrey Eisenach of the US-based economic consultancy firm NERA, notes that retransmission revenue accounted for 22% of revenue for 21st Century Fox in 2013, 23% for CBS, and 17% for Walt Disney. In 2013, broadcasters received approximately $3.3 billion in retransmission consent payments. To be clear, this sum is exclusively for payments to broadcasters for free-to-air content, and does not include compensation paid to cable programming networks. But it’s a boon for the pay TV companies to carry the free-to-air signals in these markets, for an obvious reason: the Murdoch camp loves the idea of retransmission fees because they fatten the bottom line. But in Australia, the UK and Germany — places where the Murdochs don’t have a free-to-air network, but have pay TV companies — they are opposed. — Glenn Dyer

Illuminating Shine deal. Reports from the United States overnight suggest the merger of Shine, Endemol and Core Media, being promoted by the Murdoch family’s 21st Century Fox and buyout group Apollo Global Management, is well underway. The merger of the three groups (Shine is owned by 21st Century Fox and the other two by Apollo Global, which also controls a stake in Nine Entertainment Co in Australia) was announced in May, but since then there has been no official statement.

Overnight we had the biggest clue so far, with media reports that Core Media’s management had been reamed by Endemol, which has taken over the running of the group. All of Core’s executives in various production teams now report to Endemol management. The reports also say Core Media CEO Marc Graboff is departing. He will stay for a month or so to “smooth the transition” (to what wasn’t specified), but after that Endemol North America co-CEOs Cris Abrego and Charlie Corwin will oversee some of Core’s operations. Until the final shape of the merger is worked out, Core Media will remain a separate company. But then there’s the bigger question who will run and dominate the merged Endemol and Shine grouping, and just how that will be implemented in the US, UK (where there are regulatory problems emerging) and in Australia, where Shine makes a truckload of money from the struggling Ten Network. — Glenn Dyer

Front page of the day. News Corp must be loving those late print deadlines. The Daily Telegraph managed to get the royal baby news on the front page of today’s edition. We couldn’t find any mention of it in today’s Age, but it did “feature” in The Sydney Morning Herald…all the way back on page 13. 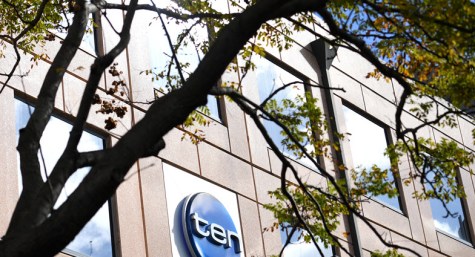 The Ten-Foxtel deal should be blocked

All due to deadlines? Last time the SMH ran a royal baby announcement so prominently, its readers deluged the letters page with republican fury. Maybe with a choice of page 13, they are giving the story the lack of prominence it deserves.

What part of FREE, as in free to air, do they not get? And who gains by retransmission of FTA? The advertisers on the FTA channels, and because they pay them, the FTA channels. They should be paying the retransmitters for the service.