Green Square development not so healthy ... a whistleblowing history ... lols with Young Liberals ...

Whistleblowing in her blood. Kathy Jackson is having an interesting time, but the whole HSU mess is not her first foray into whisteblowing. A hundred years ago in the 1980s, then-Kathy Koukouvaos was job-sharing the Housing and Services officer position of Melbourne Uni’s student union in a small, presumably cramped office with co-officer David Feeney. Feeney had developed an ambitious plan to turn the student union into a shopping mall, with a Hungry Jack’s as the centrepiece. When the documents somehow found their way out of the office to enraged students, the proposal quickly collapsed. Whatever happened to young Kathy Koukouvaos? What indeed …

Green Square not so green. While Sydneysiders race to have the most witty tweet about #spacenoodle, another inner-city development has run into some problems. A tipster tells us that the Mary O’Brien Reserve in Zetland, a park in development as part of the Green Square project, has had all its trees, plants and grass removed due to contamination from the site’s previous life as a toxic industrial site. We put this to Sydney Council and were told by a spokesperson:

“Under an agreement with the City, Lateral Corporation undertook improvements to Mary O’Brien Reserve as part of the development of the neighbouring apartment buildings. Lateral Corporation is required to ensure that any existing pollutants or contaminants on the site are treated to ensure the park is fit for public use. Lateral Corporation has not yet provided adequate documentation to the independent site auditor to confirm that this has been undertaken to the required standard. The developer has committed to carry out further work to remediate the site to the required level. These works started this week with the replacement of the turf, soil and plantings. The trees will be retained.”

Rego blunder. Ms Tips knows that typos are easy to make — but surely the employees at the NSW Roads and Maritime Services know their own website? Or would at least check before sending registration notices? For those wondering how to pay their rego bill, it’s a “.gov.au” website, not “.com.au”. 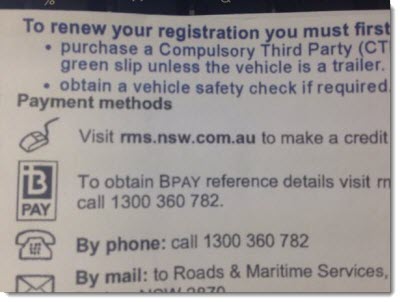 Pando-less public servants. We asked earlier this week which websites were blocked for public servants around the country, and one tipster let us know that in South Australia, bureaucrats are banned from accessing Silicon Valley tech news site PandoDaily. We can’t think of why public servants are blocked from tech news, but these things aren’t known to make sense.

Best time to fly? A lot of people are feeling a bit cautious about flying at the moment, but don’t tell that to Tiger Airways…

ABC does fly Pacific. With the ABC’s presence in the Pacific being curtailed through cuts to Radio Australia, plenty of Canberra wonks are musing on the consequences. Crikey hears that Foreign Affairs staff have been grumbling about the ABC not sending journalists to accompany Foreign Minister Julie Bishop on her two recent Pacific trips (one was in December, the other in February). Describing it as an ABC “own goal”, our tipster said it would have provided an excellent chance for Bishop to see just how well-regarded the ABC is in the region.

Foreign Affairs staff are right to worry about the consequences of ABC cuts to regional media diversity (Chinese media are expected to pick up the slack after the Australia Network contract was axed in the budget), but it doesn’t appear the ABC was complacent in covering the region before. We asked whether the ABC had sent anyone to cover Bishop’s recent Pacific trips and were told Dominic Schwartz went with the Foreign Minister to Fiji and Liam Cochrane went with her to Papua New Guinea in February. Jemima Garrett also covered the minister’s speech to the Australia-PNG business forum in Cairns in May.

Young Liberals are funny, who knew? The trailer for new web series Jeff vs The Left appeared online last week, and we’re looking forward to what comes next. At first Jeff Martin was a little too convincing — but we felt better seeing that most of these people were fooled too…

Re the ‘Young Liberal’: why am I reminded of Chris Berg…

Pando is an interesting site isn’t it.

I’d be gobsmacked if anyone was fooled by Jeff. If nothing else, the placard saying “politicians deserve a pay rise” is a dead giveaway.

rms.nsw.gov.au and rms.nsw.com.au seem to end up at the same place.

They have catered for the lack of knowledge of their employees.