With last week’s release by the Indonesian government of five West Papuan political prisoners and more foreign media shining a light on the deteriorating human rights situation in West Papua, Indonesia is under increasing pressure to open the region to the outside world.

The Indonesian constitution and international law supports the idea of exercising rights to peaceful protest without prosecution, but Indonesia’s arbitrary detention of peaceful political activists in West Papua contradicts this. Many West Papuans have been and continue to be jailed for so-called “crimes” and sentenced to three to 15 years — such as Filep Karma, who peacefully raised the outlawed Morning Star flag in 2004 and was convicted of treason for 15 years, and Forkorus Yaboisembut and Edison Waromi, who were among the five released last week, jailed in 2011 on convictions of “subversion” for reading out a “declaration of independence” from Indonesia.

The crime of subversion, which accounts for so many West Papuans still incarcerated, is an old Dutch law reconstituted by Sukarno, the first president of Indonesia, on May 1, 1963 — the day the United Nations gifted the territory and people of West Papua to Indonesia. Many West Papuans — and sometimes even their relatives — are arrested by Indonesian authorities for simply attending political demonstrations, being politically active or joining political organisations, or for engaging in civil resistance activities.

The searing indictment on Indonesia’s policies and military practices shows at least 71 political prisoners (on record) still behind bars. The ongoing exploitation of the Indonesian constitution de-legitimises and censors pro-independence groups and maintains offensive restrictions on West Papua’s freedom of assembly and expression.

Outgoing Indonesian President Susilo Bambang Yudhoyono’s two terms in office have proven Jakarta’s impeccably futile policy on West Papua. The stalemate continues, with West Papua’s statehood facing a political climate of inaction, denial and marginalisation, with unprecedented challenges of increased division of regencies, increased convictions for corruption to undermine the struggle for self-determination and inadequate action on a culture of impunity.

Well-placed Indonesians in Jakarta claim Yudhoyono believes West Papua should be free but doesn’t want to stand charged with violating his state’s long-standing policy of “territorial integrity”. Jacob Rumbiak, a West Papuan academic who spent years in jail with Waromi, said: “The Indonesian state demands absolute loyalty from its citizens, and its institutions have always been charged with defending its territorial integrity. In the service of those imperatives, anything the international community would consider illegal has always been quietly legalised.”

Although Rumbiak believes Joko Widodo, Indonesia’s President-elect, will be as bound by centralism and territorial integrity as previous presidents, most civil society groups in West Papua welcome Jokowi’s win and his ambitious campaign declaration to allow foreign journalists into the region. The big challenge awaiting Jokowi is tackling the underlying grievances of West Papua’s political status and international pressure on human rights abuses. Until these are addressed, the common saying in West Papua remains: “An old song sung by a new singer”.

Rumbiak was speaking from the Federal Republic of West Papua office in Melbourne Docklands, opened last month by Yarra councillor Amanda Stone. “West Papuans have always rejected the New York Agreement that rendered us Indonesian. It was drawn up by foreigners — principally the US, Netherlands, Indonesia, and Australia … and set up the genocidal conditions for Melanesian West Papuans that are now, finally, being reported on,” he said.

Rumbiak added, “The state we raised in 2011 is what West Papuans have determined they want. It stands on UN principles, not the machinations of a few unprincipled foreign governments. That’s why so many Australians are paying the rent on our office in Docklands — they believe in us, and the future of West Papua.”

Peter Woods, a supporter of West Papua who regularly visits the country, insists Australia’s national interest — and relationship with Indonesia — would be better served if Australian politicians address rather than ignore the Federal Republic of West Papua. “East Timor is a good example. Indonesia’s illegal occupation was eventually overthrown by the East Timorese people and the good citizens of the world, but accommodated by successive Australian governments. We shouldn’t allow ourselves to be isolated in the region again. Australia should use its position in the UN Security Council to undo the travesty wrought upon West Papuans 52 years ago.”

All aboard the gravy train as SBY visits Fiji 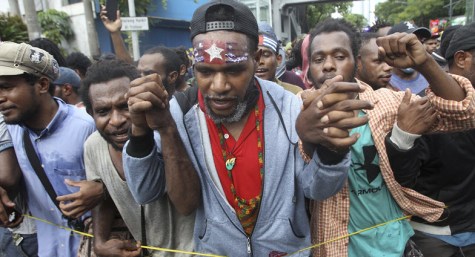 Meanwhile the failed/failing state of Papua New Guinea, the world’s most dangerous place for women and not much safer for men, blunders on. Compared with PNG Indonesian Papua is not so bad.

Exactly what I was thinking Rais – while we can all believe in the right of self-determination at a philosophical level, the actuality of the failed state of PNG makes me wonder just how much better off West Papua would be either out on its own, or joined with PNG.

I am no fan of Indonesia’s imperialistic attitudes, but I’m also a realist.

Lets not forget that the “Republic of Indonesia” (RI) is not the nation that was formed in 1949, rather the RI was one of fifteen states in the United States of Indonesia but during the next eighteen months Sukarno attacked and subdued the other states into submission. Indonesia then fought other nations to expand its borders in Borneo, New Guinea, and Timor. Indonesia has introduced HIV/AIDS and a number of parasites and exotic animals that have infected the people and animals of New Guinea and threaten Australia. There is little to stop bats, mosquitoes, and other carriers moving between Papua and our mainland. And on the economic front Jakarta prefers to use the vast gold and other revenue from West Papua to employ companies in Jakarta rather than companies in Australia.

An independent West Papua is likely to be more open to Australian companies bidding on nation building projects, would impose customs control to mitigate further damage to it and thereby our ecology, and would likely agree on a range of mutual defence interests. In short an independent West Papua would likely be less hostile to Australians than an Indonesian controlled Papua.

As long as that mine at Freeport (sic!)remains majority US owned and Indonesia’s most abundant source of revenue West Papua will remain as it is today.
When Sukarno et al fought for independence from the Dutch one of the tenets was “ethnic solidarity” – by no stretch of the imagination could West Papuans be considered to have any links, genetic, linguistic or cultural to Indonesians.

I don’t think America cares as much about Freeport as you might imagine. For example the US Congress in 2005 approved a Foreign Relations bill telling the Secretary of State to report on condition inside West Papua and on the validity of the Indonesian claims about their ‘act of free choice’; and that was a Republican majority that was content to call the Indonesian and Freeport presence into question. The only reason that bill did not become US law is because Indonesia has a habit of interfering in the affairs of other governments, SBY instantly denounced the bill and said he would have the US Senate reject it. It is only because the Indonesian lobby USindo.org was allowed to work behind closed doors to make deals with Senators that the bill failed.

And although the Indonesian Generals were willing to kill to keep their hands on East Timor, at the end of the day too much of the Indonesian economy is now dependant on international trade to endure international sanctions. In the 1960s Indonesia could afford to snub the United Nations but it has a different economy now.