Public servants and prosecution. The Royal Commission into the Home Insulation Program has targetted the highest levels of power, with former PM Kevin Rudd giving evidence, but one tipster warns of its chilling effect on public servants getting on with the job:

Does this ring true? If you know, fill us in.

Santos go-slow. After complaining loudly about delays to coal seam gas project approvals in NSW, trumpeting the urgency of bringing on new supply to meet a looming NSW gas shortfall, and finally succeeding in getting the state government to fast-track its controversial Narrabri gas project in the Pilliga State Forest, it seems energy company Santos is seriously struggling to meet the deadlines it wanted imposed. Earlier this month Santos confirmed it had missed the June 30 deadline for release of its environmental impact statement for Narrabri, and well-placed sources now say it won’t be ready until the end of the calendar year.

The fast-track process announced in February envisaged that a final decision on the project would be made by January 23 next year. Pretty extraordinary given Santos has had years to work out what it wanted to do at Narrabri, since it shelved the plans drawn up by the old Eastern Star Gas. A spokesperson for Santos told us:

“Our commitment has always been to deliver a comprehensive and thorough assessment, and we will take the time to do exactly that. We will submit the EIS once we are satisfied that it comprehensively addresses the potential impacts of the project to the satisfaction of both the government and the community.”

Brandis’ security slip. We gave Attorney-General George Brandis something of a pat on the back yesterday in relation to his new national security reform legislation, which we admit is unusual for us. But yesterday he made a real howler while talking to Alison Carabine of the ABC’s press gallery bureau, about data retention. Referring to the data that telcos retain about their customers, the first law officer of Australia said “that’s accessible by the agencies under warrant”.

That’s wrong — and seriously wrong. The AFP only has to fill out an internal form to ask a telco for phone records, and they receive them — there’s no warrant process of any kind. And it’s not just the AFP or ASIO — one of the problems with the current telecommunications interception framework is that the list of agencies that can obtain metadata without warrant is ludicrously long, and runs to local councils, taxi association and the RSPCA. There are so many agencies that can get your data without a warrant that intelligence and law enforcement agencies, and even Brandis’s own department, support curbing the accessibility of the data.

Surely Brandis knew this? Maybe he misspoke. Or maybe, by saying your metadata can only be accessed by warrant, he was hoping to give a false sense of comfort to voters when it comes to data retention.

Royal commission idea floated. Will Opposition Leader Bill Shorten introduce a royal commission into operation sovereign borders — ake turn back the boats — if elected? We’ve heard a little whisper people are talking about the possibility — but of course, Shorten has to get elected first.

Speedo no-go. After seeing yet another political cartoon depicting our PM in his splendid red budgie smugglers this week we wondered what has happened to Tony Abbott’s favourite swimmers — they seem to have been kept carefully tucked away since the election last year. Crikey’s hunt turned up one final snap of our favourite iron man emerging from the waves at a charity swim well over a year ago. Like Alexander Downer before him, Abbott still finds himself trapped in a very fishy net — but maybe it’s time for our satirists to move on? 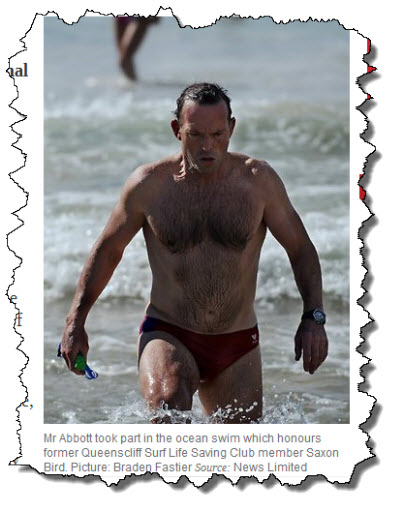 Remembering Conor. West Australians were shocked this week by the deaths of Conor Murphy and Klye Scolari on Monday after their breathing equipment was compromised in a power blackout. Murphy worked in the office of Fremantle Labor MP Melissa Parke, and she paid tribute to him in Parliament this week:

“He was remarkable for his strength of character, his political commitment, and his drive to tackle injustice and promote social inclusion — but also for his offbeat sense of humour, his fierce independence and, from time to time, for what can only be described as a magnificent ginger beard.”

The full speech can be found here.

Ms Tips stands corrected. In yesterday’s Tips, we suggested that our friend the revolting cyclist should face his protest banner supporting public broadcasters in Australia towards the cameras filming the Tour de France. He’s taken time out from watching the peloton to tell us that’s exactly what he was doing — for the helicopter cameras. He says that despite good intentions, the protest is quite the logistical nightmare:

“Anyway, I have learnt from my mistakes, and if we still have a public broadcasting service in Australia this time next year, I will try again.”

Amazing, I thought that the pink bats problem seemed mostly to do with the lack of enforcement of Workplace Safety and Standards being enforced, the subsidy was merely an add-on.

“but maybe it’s time for our satirists to move on?”
I’m not sure you know how caricature works. How many times and how long ago did Downer wear fishnets?
It is clear you are not a fan of cartoons after banishing them from Crikey so maybe you should move on?