Business Spec wants to be nice to Rupert? ... James McGrath's past ... musical chairs at Qantas ...

Business Spec and the boss. It took just 20 minutes yesterday for an article that rips into Rupert Murdoch’s views on climate change to get pulled from the Business Spectator website, and with lines like “with such a dramatic misunderstanding of what climate experts expect will happen in the future, it’s no wonder that Murdoch and his media empire don’t view global warming as a serious threat,” it’s no wonder.

Business Spectator was bought by Murdoch’s News Corp two years ago and at the time, owner Alan Kohler said it would “remain independent” — but did this piece cross the line? Business Spec editor Jackson Hewett told us the piece was removed because it was originally published in a blog on The Guardian.

That checks out, so how did it end up on Business Spec? The piece, by American writer Dana Nuccitelli, was also posted on website Skeptical Science, which runs on a Creative Commons licence. Editor John Cook says its pieces are occasionally picked up by sites like Business Spec, but someone must have been asleep when they picked this one — which still appears on Google even though the link is now a 404 error. So was the piece really pulled because it was about Rupert? You decide …

Demoted to the Senate. New LNP Senator James McGrath is getting a lot of attention for his maiden speech, including his claim that people have a right to say “bigoted and stupid” things. McGrath is comfortable and relaxed about saying it out loud — and he should know about saying stupid things. As a young Australian expat working for London mayor Boris Johnson in 2008, McGrath responded to a veteran black activist’s suggestion that old Caribbean Londoners would leave if Johnson won the mayoralty by saying “let them go”. Not particularly racist, but a potential disaster in a tight mayoral race.

The Tories showed their courageous commitment to free speech by dropping McGrath like a hot goat pastie,with a dose of antipodeanism to speed him on his way. McGrath was on track to enter the mother of all parliaments, but there was no place for him in Dave Cameron’s groovy new Tories. His return to the bush league is very much a comedown.

Wiki what now? Politicians and staffers tempted to edit their Wikipedia pages will have to think twice, after a new Twitter account began monitoring changes made from Australian parliamentary IP addresses. Based on accounts from the US and the UK, @AussieParlEdits is a bot that will post any time it detects an edit from selected IP addresses.

So far it’s picked up a minor change to maverick Victorian MP Geoff Shaw’s page made at Spring Street. If Tips was famous enough to have its own Wikipedia page, we’d be tempted to edit our own entry too, which is why we’ll be watching this account with interest.

Hockey’s Daddy Issues. Karl Stefanovic is no stranger to asking weird questions on The Today Show, but this exchange with Treasurer Joe Hockey has left us feeling very uncomfortable…

Qantas staff tanty. This from a well-placed aviation type …

“A senior executive at Qantas (who reports directly to Alan Joyce) was travelling from London to Sydney in First Class about six weeks ago and the cabin crew asked them to switch seats with a commercial passenger (paying many thousands of dollars). The commercial passenger was having trouble with her seat — it was not reclining properly. It is Qantas policy that staff move seats whenever crew ask them to, no questions asked.

Our spy reckons Qantas is on track for a large loss this year, “much of that due to the international business”. The preliminary final result comes out on August 28 — one to watch. We know the half year-result (to February 2014) was a $252 million loss, so the FY number might not be pretty.

Sacre bleu! ABC protest goes global. Crikey loves a good protest. A cycling nut has sent us this one, from the edge of the Tour de France … 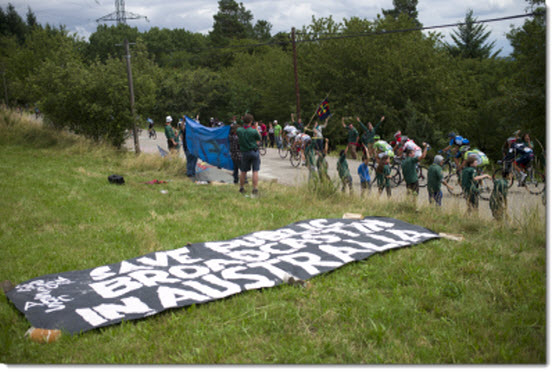 Our revolting cyclist says he is “looking for a new location”. Just one suggestion — you need to have the banner facing the cyclists (and the TV cameras).

The Business Spectator is breaking up. And other media tidbits of the day.

News Corp kills Climate Spectator. Plus other media tidbits of the day.

While separate websites remain, the integration of Business Spectator into The Australian is almost complete.

Does Business Spec have a history of republishing pieces released under Creative Commons elsewhere? If so, their explanation wouldn’t add up.

Actually the ABC protest banner is well positioned for the helicopter camera coverage.

Drupert: A link to the cached copy would have been useful. It’s here: http://webcache.googleusercontent.com/search?q=cache:Z-1hvarFMjoJ:www.businessspectator.com.au/article/2014/7/16/policy-politics/move-front-climate-class-rupert+&cd=2&hl=en&ct=clnk&gl=au&client=firefox-a