Brandis’ call to imams will win no Muslim hearts and minds

Militant extremist group ISIS has certainly been successful at one thing -- it is terrifying Western governments and leaving Muslims in the West vulnerable and exposed.

The ability of the ISIS-proclaimed caliphate to wield authority over Muslims around the globe may be limited (for the record, I am withholding my personal pledge of allegiance from Caliph Baghdadi), but its ability to send Western media and political leaders into a frenzy of fear mongering is already on display. Which, of course, might have been at least part of the point. An atmosphere of moral panic leaves Muslims living in the West vulnerable and exposed, and while this sense of vulnerability may not induce loyalty towards the self-proclaimed global Islamic authority run by Islamist militants, it certainly undermines their sense of belonging in Britain or France or Australia.

Western governments were already in the process of stamping their authority over Muslim communities, alarmed by the departure of a growing number of young Muslims for the conflict in Syria. Australian Attorney-General George Brandis of course is signalling a hard power approach with the introduction of new anti-terrorism legislation and the proclaimed intention to detain any Australian citizens participating in the conflict upon their return to Australia. “We don’t want them back.”

But of course, hard power is nothing without soft power, so Brandis took the time hold a press conference in the halls of Parliament House alongside a cohort of Australian imams, who he described as “important partners” in the struggle to keep young would-be jihadists from the battlefield. “In your communities in particular you have a especially important role as moral leaders, as charismatic figures, as authority figures, as religious leaders,” he told them. That description did not resonate with many Australian Muslims, who knew little or nothing about the Muslim leaders in question other than that they were photographed alongside an Attorney-General who was about to introduce legislation targeting their communities.

While Brandis sought to harness the patriarchal authority of the imams, the British police are counting on the power of matriarchy. In April, Britain’s National Co-ordinator for Counter-terrorism Policing, Helen Ball, launched a campaign appealing to Muslim women to wield their influence over any of their menfolk who might consider joining the conflict in Syria. All of a sudden, Muslim women are not the helpless victims of their male relatives — they’re powerful figures who can stand between them and the battlefront.

This conflation of social work with security undermines efforts from Muslims themselves. Of course there is genuine concern among Muslim families and communities about the welfare of any young people who might travel to Syria and Iraq. The problem is that partnering with an Attorney-General who is seeking to water down the Racial Discrimination Act because people have the right to be bigots or a police force that has done little to win the trust of Muslims and other ethnic minorities undermines the very authority of the community leaders and mothers in question. And it heightens the fear among Muslims of hostile surveillance — not only via the computer at your desk but from the imam at your local mosque and even the mother who ruffles your hair as you leave the house. The fractured communities and families that result are not well positioned to provide a meaningful alternative to foreign adventures for a generation that has come of age in the shadow of post-September 11 hostility to Muslims in Australia.

And as the nation prepares to commemorate the Gallipoli centenary next year, Brandis should remember that there is nothing un-Australian about heading off to the Middle East to sacrifice one’s life in a pointless war. 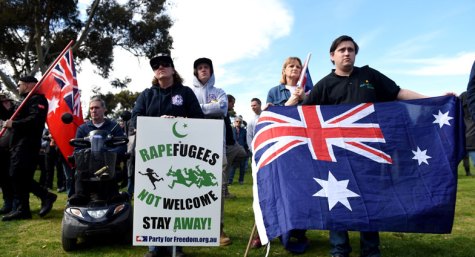 Some interesting points raised here. I like the slight tongue in cheek tone, but what else can one do in the face of so many daily absurdities. For example, I’m not quite sure if the women are being positioned as “powerful figures”. I wonder if women are being made being allocated the responsibility for male behaviour e.g. Adam & Eve, or any general off field footy incidents. I would love to be wrong on this one. Similarly making a show of the imams in this set up. Would it have a deterrent effect on decisions compared with the “hard power” experienced daily or encourage in the target group an idea of a complicit relationship with the government and agencies?

While we are all musing on the finer points about how western governments might engage positively with Muslim communities, do you have anything to say at all about how to manage the very real risk of radicalised young men trained in how to wage an insurgent war bring it all back from Syria?

Do you really think it’s just a “frenzy of fear mongering”? So there’s no risk then?

How conflicted the imams must’ve been posing as the backdrop for Brandis’s photo.

Your final paragraph is the knockout punch.

“And as the nation prepares to commemorate the Gallipoli centenary next year, Brandis should remember that there is nothing un-Australian about heading off to the Middle East to sacrifice one’s life in a pointless war.”
Now there’s a perspective Brandis wouldn’t have been expecting!