A flood of pollies have books coming out, from Julia Gillard to John Howard and Bob Day. We look at what makes for a good read in this tricky genre.

It seems a little unfair to the reading public that Paul Keating never wrote his memoirs, while Kevin Andrews has written a 483-page treatise on making marriage work.

Lately just about every politician seems to be writing a book. It’s a case of “apres moi le deluge” after Labor’s six turbulent years in power. If you haven’t read recent works by Bob Carr, Kim Carr and Chris Bowen, you can hold out for upcoming launches of books by Julia Gillard, Wayne Swan, Greg Combet, Peter Garrett, Mark Latham, Gareth Evans … and Crikey has heard whispers that Kevin Rudd has found a publisher.

But pollies beware. The reading public is only so interested in books by parliamentarians, and some of these books are destined for the bargain bin (ping Kim Carr).

As a cautionary tale to wannabe politician-cum-authors, Crikey has talked to publishers and examined sales to work out who should write a book, and who shouldn’t. Firstly, it helps to have been a prime minister with an army of supporters who will buy your book even if they never read it.

The biggest-selling book by a politician is John Howard’s autobiography Lazarus Rising, which sold 100,000 copies. That makes it a mass-market book, as opposed to most non-fiction political books which are niche (there’s a publishing mantra that “only cookbooks sell” when it comes to non-fiction in Australia).

Lazarus Rising also jettisoned the convention that only books by Labor politicians sell. While Labor politicians write more books than Coalition types, the latter usually sell better. (There’s a list of some of the more memorable books by politicians further down in Crikey today.)

Howard is working on a second book due out in October, a biography of the Robert Menzies era. Shona Martyn, publishing director of HarperCollins Australia, described The Menzies Era as a big solid hardback. “It’s not just a ‘ra ra everything Menzies ever did was good’ piece,” she told Crikey, although she noted Howard wanted to balance political history written by the Left.

Other PMs have also succeeded. Bob Hawke’s memoirs sold very well. Big things are expected from Julia Gillard’s My Story, due in October from Random House. Crikey hears it’s quite a read at 170,000 words. Some publishing insiders think it may sell almost as well as Lazarus. (It would want to, given rumours Gillard’s advance was between $400,000 and $600,000.)

Then there are big-sellers by non-PMs —  the juicy Latham Diaries, in which former Labor leader Mark Latham spilled the dirt on how politics really works (and his Labor colleagues), sold 55,000. Peter Costello’s memoirs sold 42,000, while Tony Abbott’s Battlelines shifted a respectable 20,000 copies.

Are there more best-sellers in the works? Crikey has heard a rumour that Peter Garrett scored a $300,000+ advance for his book, due out from Allen and Unwin next year.

Wayne Swan’s book is out next month, also via Allen and Unwin. The Good Fight: six years, two prime ministers and staring down the great recession looks at how Australia coped with the GFC, plus Swan’s take on the Rudd/ Gillard ructions.

“You can either suck up the system and get a few little sinecures, or you can put it all down there in honest format and see how you go” — Mark Latham

Greg Combet’s memoir, The Fights of My Life, comes out in late July, commissioned by Louise Adler from Melbourne University Publishing (MUP). Adler says it focusses on his time pre-politics, as a union leader etc, although it includes his parliamentary career. While Combet writes on the Rudd/ Gillard fuss, he’s trying to lift politics and Labor culture in the book, Adler says.

But the reality is most books by politicians do not sell well.

Liberal frontbencher Kevin Andrews’ marriage tract is called Maybe ‘I do’, but it turned out the readers didn’t. Liberal Senator Cory Bernardi has written several books. New balance-of-power Senator Bob Day has a self-help business book out next month via boutique Catholic publisher Connor Court. Kim Carr’s A Letter To Generation Next has sold fewer than 500 copies. Chris Bowen’s Hearts and Minds has sold 700. These books are in the bargain bin or on special online.

“Only a small number of them will succeed,” said Richard Walsh, consultant publisher at Allen and Unwin. “People no longer find politicians very interesting people.”

Walsh said readers might buy a book by a person they strongly support, to “join their club” and make a statement, so Gillard’s book should sell well. Books in which a pollie “shat on the political process” (like Latham and, to an extent, Bob Carr) were also attractive. An author had to write a good and honest story, with a voice of their own and human interest and drama thrown in. If it comes across as party PR, readers would not buy it, Walsh says.

Shona Martyn from HarperCollins explained Howard’s Lazarus-selling strategy to Crikey. Howard treated it like an election campaign and went to many book-related events, leaving signed copies in his wake. If he visited a regional airport, the bookshop would announce over the PA that he was signing copies. Howard kept in weekly contact with his publisher about sales, and if they dropped it was addressed. “Basically he worked it,” Martyn said.

Martyn added that people wanted to buy books by politicians they “actually cared about”, or who were provocative. Writing to cement one’s place in political history was less interesting.

While some other publishers grumble about MUP’s strategy of publishing more obscure works by politicians like Kim Carr and Bowen (it’s subsidised by Melbourne University so can afford to), CEO Adler is unapologetic. She says the field is “endlessly fascinating” and can’t be too crowded.

“I’ll do books that I know have modest expectations because I think they add to the debate about politics,” she told Crikey. (And MUP has published some big-selling titles too.)

Adler said the public read “with relish” ripping yarns from “the problem offspring” of politics like Latham. But politicians who wrote sober tomes on their reform agendas could sell too (like Costello).

Latham has an explanation for the paradox mentioned above, that Labor politicians write more books but Liberal authors sell better.

“Conservatives have got nothing else to read. In the last 20 years there’s only been three books — its not exactly a competitive market,” he told Crikey.

Latham’s ninth book, The Political Bubble: why Australians distrust politics, examines the loss of faith in democracy and “the feral right-wing element in Australian politics”. It’s out in late July from Pan Macmillan.

The author said there was a resurgence of books by politicians because fewer journalists were writing them, and because politicians wanted to set out their ideas in a coherent, long-form format, away from the 24 hour news cycle. Latham welcomed the trend, although he criticised “those self-serving, ‘I was wonderful’ type books in memoir format … I think we can safely predict Kevin [Rudd] will go into the self-serving category”.

Latham said some politician-authors wanted to get on government boards or be ambassadors, “so they don’t want to tell too much of the truth, do they … unlike The Latham Diaries, which guarantee I will never be an ambassador or on a board”.

“You can either suck up the system and get a few little sinecures, or you can put it all down there in honest format and see how you go,” Latham observed.

He was unexcited about Howard’s book on Menzies; “I’ll wait for the movie version of that, it’ll be a real blockbuster.” 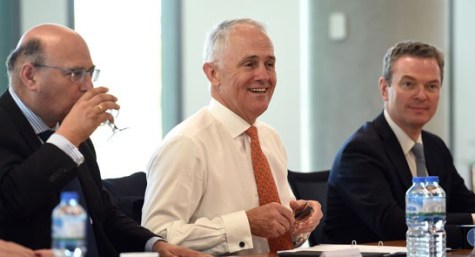 There are a lot of things not to like about Mark Latham. but I love his honesty even when I disagree vehemently. And how right was he about so many things , in particular Kevin Rudd. I loved his elite school hit list !! We really should have listened to him.

483 pages of Kevin Andrews!?? Not a terribly enticing proposition, when 4.83 seconds of Kevin has me reaching for the remote. Though I’m just a little bit surprised, that he didn’t hit on the innovative marketing scheme, where if you’re an Australian citizen and you’re having a bit of trouble with your marriage, then you should be able to get a government issued voucher to buy the book.
And speaking of innovative marketing, I suspect that a sure fire way to increase the sales of Howard’s new tome, would be for chemists to sell copies as guaranteed insomnia cures. I mean, page after page, of the turgidly dull Howard writing about the Menzies era? Surely putting a heavy duty staple through a collection of train timetables, would make for a more entertaining read.

Di – the school hit list has been around, in one form or another, for generations. Latham (and Macklin) only added venom and hate into the debate. Hardly a noble achievement.

@ Nomad. You missed out a very important word, ELITE. No, it hasn’t been around for generations because once upon a time they didn’t get subsidies. It was the greedy reactions to the hit list that gave us the venom and hatred. It was a great idea. !! 🙂

Mad Mark’s Diaries is the only political tome I’ve ever read and, though fun, he could resist the self serving elision.