The AFL is dedicated to making a profit and pleasing broadcasters, with footy club members taken for granted. It's a pity the AFL is not run more like US sports teams.

The decision by the AFL to schedule the blockbuster Collingwood v Carlton match on a bitterly cold Sunday night proved what has long been suspected — the AFL is among the worst-managed organisations in the country and has long lost sight of the people it is meant to be representing.

While Collingwood president Eddie McGuire’s demand for compensation as a result of the poorly scheduled match is somewhat fanciful, the principle holds true: time and again, the well-paid executives at the AFL (led by the recently departed Andrew Demetriou) have been willing to jettison the wishes of regular fans in favour the so-called corporate dollar or magical broadcasting rights.

The fact that the ultimate “shareholders” of the game are club members has long escaped AFL House — if anything, regular members appear to be an annoyance that needs swatting away.

The AFL, under the guidance of Demetriou (and before him, Wayne Jackson), has had its priorities wrong. Instead of using sponsorship and broadcast monies to improve fans’ enjoyment of the game, they are used to increase the AFL’s profit (which appears to largely benefit the AFL executive, who receive fat bonuses — Demetriou’s salary, at $3.8 million, was the highest sporting salary in the land). It’s almost impossible for most club members to get a seat on level 2 of Etihad or the MCG (they sit largely vacant for most matches). If you want a grand final ticket, expect to pay more than $1000.

AFL fans are speaking with their feet. Last weekend, the Collingwood v Carlton match attracted a pitiful 40,936 supporters — the worst crowd since 1921 between the two teams. That’s forced the AFL to concede it will no longer schedule Sunday night games. On Saturday, St Kilda and Richmond faced off at Etihad Stadium in front of 28,487 people — the crowd boosted by the AFL offering “two-for-one” entry. In 1998, the two teams played before 71,488 people at Waverley (before the league thought it wise to sell the ground to property developers just before a property boom).

“Overall, MCG attendances have slumped by more than 14% since 2012, while crowds at Etihad have fallen even more precipitously.”

Fans still flock to Friday night, Saturday and Sunday afternoon games. But to appease broadcasters (it’s unclear whether the broadcast agreement specifically required this), the AFL continues to schedule games at family-unfriendly times like 4.40pm on Sunday. The AFL also introduced its maligned variable pricing policy — good in theory, but terrible in practice and a PR disaster in light of a decade of rising prices. Overall, MCG attendances have slumped by more than 14% since 2012, while crowds at Etihad have fallen even more precipitously. That’s a disastrous result for a code dedicated to growth.

The falling crowds are also a result of the AFL’s worst own goal — the decision to create the Gold Coast and Greater Western Sydney franchises. Forget the improving on-field performance (that was inevitable given the weight of high draft selections), the 16 other clubs suffer massive financial loss not only from funding the money-losing enterprises, but also from losing money on their home matches. If you’re Carlton or the Western Bulldogs, would you rather play GWS or Collingwood?

As for the excuse that the expansion teams were justified on the basis of all clubs getting increased revenue from higher broadcast rights, not only is that unproven (Seven doesn’t even show matches to Queensland on its main station), but the increased broadcast revenue doesn’t appear to trickle down to the clubs and grassroots fans. Despite broadcasting revenue increasing from $500 million in 2001 to $1.25 billion now, membership and entry costs have risen sharply.

The AFL’s attitude towards members is completely contradictory to good business sense — and a very different tactic to how savvy American franchises engage with fans. American sporting teams are almost all privately owned. Perhaps perversely, despite being run for profit, American teams treat fans substantially better than AFL clubs, perhaps acknowledging that members don’t exist purely to be milked for profit and a long-term view needs to be taken.

The legendary founder of the Pittsburgh Steelers, Art Rooney, would draft players from local colleges not due to their skill, but because of the popularity with local fans. New York Giants president John Mara writes longhand replies to letters from fans, while controversial Indianapolis Colts owner Jim Irsay last year gave $8500 to a fan who was able to correctly guess a game score via Twitter.

The fact that the AFL has destroyed attendance figures by scheduling games on Thursday, Sunday and Monday nights shows that it simply has no idea that without fans, there won’t be profits. 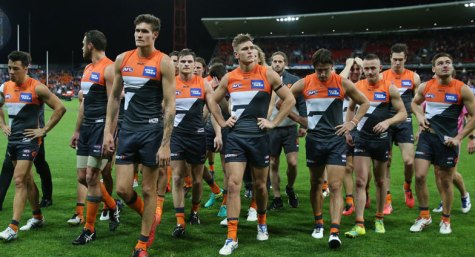 For the AFL, profit will always be the best fit

Watching these clowns running it now – like watching Little Caesar at the Colosseum?

We went to Melbourne, to the MCG for the Hawks v Magpies game – packed into seats up the back of the nose-bleed section (VV?) where you have to be careful the people you’re passing to get to your seat don’t accidently push you over the edge of the precipice of the seats in front. And three rows down there were rows of empty seats.

[And the Bombers? What a crock?
“The only team that was using artificial enhancers!” They’re still up the ladder with all the other ones that “weren’t (nudge nudge wink wink)”?
Look at the standard across the code, break-downs, recovery, since that “scandal” put a stop to such abuse “in one club”.
If you’re going to “clean it up”, do the lot, or none at all.]

If they’re going to treat us like shit while taking our money, they could at least have the common decency to flush?

Sums it up neatly. I’ve seen so many articles written that express the same view and I wonder if the AFL is actually paying any attention? Leaving aside Eddie’s whining (unless your’re a Collingwood fan, its just background noise), this could have been written by any of us footy fans. However, the smaller attendances at some games could be due to the positions on the ladder of some of the teams too. Still, sad to see our great game being ruined by greed.(#gotiges)

So true.The AFL is no longer a “Competition”.It is a series of games scheduled to maximize the financial gains to the AFL coffers.Fairness is very low on the AFL priorities when compiling the draw.This criteria permeates through all their thinking and the fact its not working with attendances down and clubs going broke is proof of their pig headed incompetence.

It sticks out like a sore thumb that a CEO on $5M+ is not a good sign in any sport, especially one which essentially boils down to a couple of dozen teams plus backyard comps.

What does this bloke bring to the game to warrant that pile of gold?

Agree with Adam completely and just want to add that The TV rights don’t deliver much to me in Sydney unless I want to waste $75 a month on Fox Crap…er TV. My son in Perth also complains of the lousy coverage.
Channel 7 would rather schedule re-runs of 1970 movies, or any of the content that passes for entertainment these days, rather than show live sport on free-to-air. Pay TV may be delivering to the AFL’s coffers but it is certainly not the medium of choice for this AFL fan.