East Timor's authorities want to restrict the media -- making a mockery of freedom of speech in the country. Jose Belo, East Timorese journalist and director of Tempo Semanal, explains.

The tale of East Timor’s controversial proposed media law is a story of insiders versus outsiders, of the rich versus the poor. Those inside the elite classes are seeking to implement a restrictive new media law so as to limit and control the information available to Timorese outside the elite group, as well as all those outside of East Timor.

The proposed media law is anti-democratic and unconstitutional and in clear breach of articles 40 and 41 in East Timor’s constitution, which uphold and protect the rights of the media, and citizens’ freedom of expression. The new law will, if passed, require that all journalists be certified by a government-controlled media council. Foreign journalists will require permits to report from East Timor, and citizen journalists using Facebook, blogs or Twitter will also need to have permission to report and express opinions.

If this law is passed it will allow government, through the media council, to impose large fines on media outlets or individuals that are uncertified or distribute information that is considered “undesirable” as defined by the media council. The proposed fines are designed to be large enough to intimidate people, and / or put certain media out of business.

It is in some ways the opening shot in a growing class struggle between rich and poor in East Timor. There are new millionaires who have become rich due to corruption and political access to East Timor’s Petroleum Fund (which has over US$15 billion in it).

As the director of Tempo Semanal newspaper and president of the Timor-Leste Press Union I will neither submit to being certified, nor will I pay any fines. As a result, in the worst-case scenario, there is a strong chance I will be prosecuted and jailed for not submitting to the new law. Other media might submit and self-censor, or be punished, censored or even put out of business by the government-sponsored media council. We have already seen the government successfully persuade almost all media outlets in East Timor to accept “capacity-building grants” in the last 12 months.

This state of affairs has come about because Timorese elites from the pro-government and pro-opposition political parties have joined forces in order to protect their individual and family financial and commercial interests. Before 2012 the main opposition party FRETILIN opposed corruption and nepotism in East Timor, but now it sides with the government as the elite insiders seek to consolidate their grip on power (and the Petroleum Fund). This law has come from the office of Prime Minister Xanana Gusmao with direct and explicit support from the office of the Leader of the Opposition, Mari Alkatiri.

Amazingly the Australian government has recently agreed to give tens of millions of direct budget support and public financial management technical assistance to the Timorese Ministry of Finance, headed by Minster Emilia Pires, who is under investigation for guiding Ministry of Health supply contracts to her husband (a story broken by Tempo Semanal). One of her most senior foreign advisers, a tax lawyer named Bobby Boye, was just last week arrested in Newark Airport by the FBI for corruption and fraud in his work in the Ministry of Finance.

During the Indonesian occupation we fought for self-determination and freedom. Most of the people who died were poor people in the mountains. Now the elite classes inside the halls of power want to limit the information available to the public. They want to do this so the public does not know what is going on with their money. What the elites should remember is that Timorese history is one of resistance to injustice. Pass the media law and poor Timorese will resist the injustices imposed on them by the elite insiders, just as they did the injustices of the Indonesian occupation. 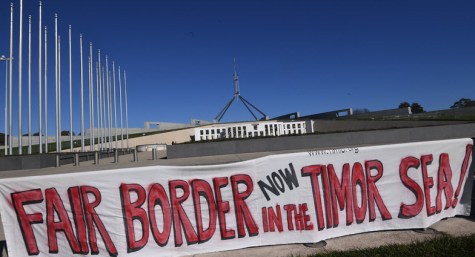 Timor-Leste’s problems run deeper than a hung parliament, and they begin with Australia 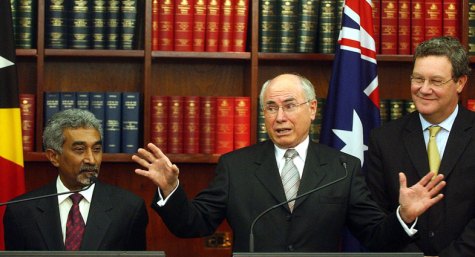 What is Australia’s involvement in the East Timor unrest?

For another look at the Timor Leste story, check out Beatriz’s War opening at Melbourne’s Cinema Nova, July 10th.

The East Timorese have learnt well from the ‘first’ world countries. What you have described about the rich ripping off the poor, Jose, sounds a lot like situation normal to Australians, Americans and others.
As for the impending new media laws in East Timor – the media here don’t need them, as they rarely inform the public of the facts in any situation. What’s more, they nearly always get away with it, Scot free! That includes our public broadcaster, ‘their ABC’!
Corporations, big business and the super rich rule the world. The ordinary people do not matter. Welcome to the real world – the revolution is not far off!!

“Elites muzzling media”?
They do it here too, editorially.

Now I understand the meaning of “..mehhhh..” – sorta wot else is nu + waddya ‘spect?

When there are power voids, every rent-seeker and reptile comes wanting to fill it. But, as Mr. Belo points out, it wasn’t they who freed the nation. The people of East Timor aren’t the kind to just lie down and take it, and their nouveau riche may find that out to their cost.