How conservative MPs are trying to undermine abortion rights

Victorian MP Geoff Shaw is the latest conservative Australian politician to try to limit access to abortions. Freelance journalist David Donaldson says it wouldn't be easy to outlaw abortion altogether, but chipping away at the edges could produce long-lasting restrictions.

Victorian Parliament is in crisis, as divisive Frankston MP Geoff Shaw has declared he would support a no-confidence motion against Liberal Premier Denis Napthine. The balance-of-power MP has tried to goad Napthine and other MPs into debating abortion rights, calling those who refused to be drawn on the issue “moral cowards” (Napthine said he would not try to limit a woman’s right to choose). He also pronounced Victoria’s abortion laws, which allow terminations up to 24 weeks, to be the “worst in the world”.

The formerly Liberal (now independent) MP is preparing a private member’s bill to eliminate the requirement that doctors who object to abortion must refer the patient to another doctor, as well as outlawing gender-selective and late-term abortions. He has also recently travelled overseas to learn how American conservatives are limiting abortion rights. It is unknown at this point if Shaw’s bill will make it to state Parliament, particularly with a possible early election looming.

Perennial anti-abortion Senator John Madigan has also brought the issue to the fore recently as he spoke about supposed sex-selective abortion. “I just cannot believe you can pick and choose the sex of a child like a handbag,” he said last month.

Madigan’s push is also currently dead in the water, with his proposed bill to limit abortions not passing federal Parliament last year.

Recently the New South Wales lower house passed a bill known as “Zoe’s law”, which many argued would restrict abortion rights by giving “personhood” rights to foetuses after 20 weeks. But its passage in the upper house was delayed due to a lack of support. It is now seen to be dead after its sponsor, Liberal MP Marie Ficarra, stepped aside in the wake of an Independent Commission Against Corruption investigation.

Shaw, an avowed pro-lifer, recently returned from a taxpayer-subsidised American study tour, where he met with anti-choice advocates in Georgia, Ohio, Nevada, California and New York to learn about American abortion laws. The issue remains extremely divisive in the United States, where a Supreme Court ruling that states cannot ban abortion outright has led activists to find creative ways of restricting the right to choose. Recent initiatives in the US have included requiring parental consent for minors (which also exists in Western Australia for those under 16), removing coverage of abortion from health funds, and imposing burdensome regulations on clinics.

For social commentator Eva Cox, the combination of hung parliaments and a general push towards conservatism is driving some of the recent anti-choice activism.

“It’s become more complicated, it’s not about banning abortion per se,” Cox said. “Right-to-lifers are getting smarter about this and approaching it in different ways. They don’t confront it head-on; they’re poking around the edges much more and trying to contain and reduce it in various ways.”

“What women have to be wary of is that a lot of this stuff sounds like it is only picking off bits, but it’s designed to undermine the right to choose.”

“I can see that we will have this as an ongoing rumbling under women’s equality.”

A Newspoll in December last year found that 85% of Victorians support a woman’s legal right to choose. Australia-wide, support for the right to terminate in the first trimester sits at around 60%-70%.

In Australia, abortion laws are governed by the states. But despite high levels of community support for the right to choose, in everywhere except Victoria, the ACT and Tasmania, all or part of the law governing abortion rights is to be found in the crimes act or criminal code. In the jurisdictions that have decriminalised it, abortion is generally legal on request. Queensland’s laws are the most restrictive, only allowing the termination of a pregnancy when the woman’s life or health are in danger.

The Commonwealth also plays a role by providing Medicare funding and legalising drugs such as abortion pill RU486, which was effectively illegal in Australia until 2006, due to then-health minister Tony Abbott’s refusal to approve it.

Our now Prime Minister once referred to abortion as “the easy way out”, though many agree he is disinclined to make an issue of it for fear of creating a backlash (he wouldn’t be able to do much anyway, as most power lies with the states).

Senator Cory Bernardi has referred to abortion as “an abhorrent form of birth control” creating a “death industry [that] despatches 80,000 to 100,000 unborn children [in Australia] every year”. Earlier this year, Victorian MP Bernie Finn stated that he believed there was “no acceptable reason” for abortion, arguing that “many rapists and particularly paedophiles use abortion … as a way to destroy the evidence”.

Tasmanian independent MP Brian Harradine forced then-PM John Howard to ban Australian foreign aid money being spent on family planning and abortion in exchange for his support in the sale of Telstra. The DLP and Family First have both pushed for tougher abortion laws.

And it’s not just men. Labor MP Jacinta Collins caused a stir last year when she was appointed Kevin Rudd’s minister for mental health and ageing, with some concerned that her anti-abortion and anti-gay views were incompatible with the portfolio. Collins is from the conservative Shop, Distributive and Allied Employees’ Association, and has previously been director of the pro-life Caroline Chisholm Society. 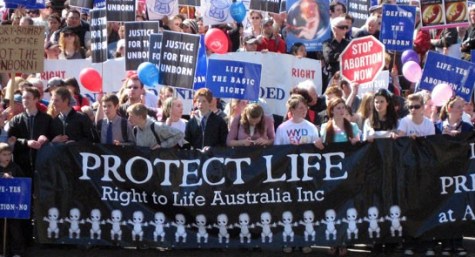 Today’s news reported that the bodies of 800 babies have been discovered in the septic tank of a home for unmarried mother’s. Pro life believers are living in a fools world – we have never and still do not support single mothers sufficiently. Pro Lifers are also comparatively affluent and often hold the view that taxes should be low, government small and welfare is too generous. YIn the days before abortion infanticide was common. It seems it may have been practiced very recently in Ireland.
The world is often a cruel and harsh place for women and children I would not like to see our abortion laws made more restrictive because as a society we seem to be unwilling to provide adequate housing, education, healthcare and food for the disadvantaged.

It seems to me that conservatives use abortion to try to get voters to look at something else. With the exception of the bill in NSW that was proposed, and passed in the lower house, in part to acknowledge the feeling of grief of women who suffer other injuries and have a late miscarriage or still birth, most forays into making abortion less, rather than more accessible are part of another strategy. most successfully by Prime Minister Howard who, with the support of the ALP, traded off foreign aid to assist women with fertility control in order to sell off Telstra – note Tasmania got a lot of benefits as well. Geoff Shaw may be using it to say ‘remember me’, though he seems to be fairly self defeating recently. The States with abortion in the Crimes Act or Criminal Code are simply continuing nineteenth century legislation and those that have less draconian laws have gone through very transparent processes of law reform since 1970.

Furthermore, and this is important, while the number of abortions has increased, so has the population, the percentage of the population undergoing abortions has remained the same or decreased. It is difficult to know which because record keeping was non-existent before Medibank and Medicare. States simply could not keep records about illegal activity undertaken silently and in private. What particularly amuses me about the continued repeating of the number (sic?) 80,000-100,000 annually is that the same number was sometimes used for shock value in the late 1960s when the total population was about 12.5 million, today the ABS population clock reports a bit over 23.5 million.

What’s this about then, if not an increase in the termination of pregnancies? I agree with Eva Cox – watch out for the dog whistle about the dangers of women’s equality and self determination. What most disturbs me is that some of the leaders are the age of my adult offspring. Watch out young women, prepare to campaign against your fathers and mothers.