Joe Hockey has deeply cut the foreign aid budget, ignoring a commitment to the UN Millennium Development Goals. The real losers will be the millions in the Asia-Pacific on the poverty line.

When a government cuts spending, its non-voting constituents are always going to fare worse than those who do vote. Whatever residual anger might come at the next federal elections, Australia’s aid recipients won’t be a part of that vote.

As compared to budget cuts of $7.6 billion over the next five years, or a little over $1.5 billion a year, the government’s trimming of just $107 million from the $5 billion aid budget in January looks positively generous. An earlier bipartisan commitment to lift Australian aid spending to 0.5% of gross national income, delayed until 2017-18, now appears entirely gone.

Australia has an international obligation under the United Nations Millennium Development Goals to spend 0.7% of its gross national income on foreign aid by 2020. That also appears to be no longer within the realms of foreseeable reality.

The Coalition’s had a pre-election commitment to grow the aid budget in line with inflation. But, riffing off former prime minister John Howard’s “core” and “non-core” promises, that appears to have joined the substantial list of “non-significant” promises.

Yet Australia’s aid budget, and the uses to which it is put, is the better face of the “white tribe of Asia”. Moreover, some regional governments only marginally concerned with cuts to Australian aid will measure this spending reprioritisation against Australia’s defence build-up. An 11% increase in the defence budget stands in stark contrast to the aid cuts, and sends a less benign signal to our neighbours.

Even Crikey’s sober readers, considering aid cuts set against wider cuts, might be saying, “So what?” Australia’s aid budget has been, overwhelmingly, aimed at the Asia-Pacific region. In this area, there are 757 million people in extreme poverty, usually defined as living on less that $1 a day.

Australia cannot fix this problem by itself, and regional governments do need to lift their respective games. But, to the extent that Australia has committed to assist, that promise has been broken to more than just ourselves.

With some regional governments being miffed, Australia will lose diplomatically from this budget. But the real losers from Australia’s aid parsimony will be those whose existence is just this side of total calamity and, for want of a few cents a day each, may now slip to the other side.

*Professor Damien Kingsbury is director of the Centre for Citizenship, Development and Human Rights at Deakin University. He is co-author of International Development: Issues and Challenges, second edition 2012. 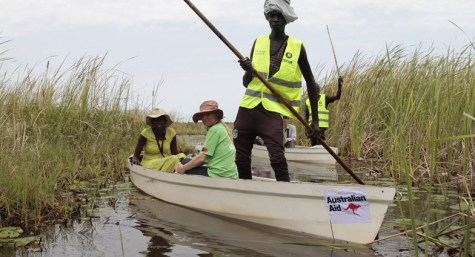 Why cutting foreign aid (again) is such a terrible idea

Re “”Our” record on regard for less fortunate, less developed, foreign countries”?
What’s a bit more international resentment, that can be exploited by a Coalition government, for domestic votes?

[Who gave poor old East Timor such a jolly rogering in the “(Australian) national interest”? Over those “disputed reserves” of their resources, the development of the exploitation of which would have made them so far less dependent on this sort aid? How Honest John Howard’s government (including Abbott, Hockey et al) used government resources to rob them, to benefit one of our tax-paying companies?
“Iraq”?]

What’s the savage cuts??? Aren’t the current government spending $24B for new fighter aircraft. Foreign aid not only comes via sea or land, it can comes via bombs from the air like war criminal Howard used on Iraq.

Screw the UN, and our obligations to them. They are nothing but another big corporation making billions under the guise of humanitarianism.

The increase in our defence budget is wise. Since Obama et al announced significant cuts to their military budgets/personnel/materials, we have seen previous hegemonic countries take it as clear messages to once again commence broadening their spheres of influence, knowing full well the usual “coalitions” will be unable to intervene. Ukraine is a case in point.