Stand down, there is no budget emergency after all

Reports of the budged emergency have been wildly inflated in order to give the rich a free pass, writes Richard Denniss, economist and executive director of The Australia Institute.

Treasurer Joe Hockey expects unemployment to rise and business investment to fall. He plans to shed 16,000 public sector jobs into a labour market that Treasury says is softening. Indeed, Treasury states that the proportion of people who are employed or looking for work will continue to fall, “reflecting the expectation that employment growth will not be strong enough to entice discouraged workers to resume their job search”. That’s Treasury code for “people will stop looking for jobs because there won’t be many to look for”.

So what’s a Treasurer facing a softening labour market and rising unemployment to do? Make life hard for the unemployed, of course. Unemployed people under 30 will bear the brunt of the budget pain, being forced to wait six months to apply for Newstart (i.e. the dole). Rather than accept responsibility for rising unemployment, the Abbott government is clearly setting out to shift the blame onto the victims.

As the mining boom begins to fade, Treasury is also predicting a steady decline in the price we get for our exports, aka the terms of trade. As the miners stop building new mines, the car companies head offshore and the foreign tourists continue to think of Australia as a high-cost destination, it’s not clear where new investment and job creation is going to come from. It is clear from the budget papers, however, that the Treasurer has no real plan.

The “big idea” in the budget is to spend billions of dollars on new roads. While there is no doubt such spending would create some great opportunities for Abbott to cut ribbons and sit in excavators, in reality spending money on roads is one of the least effective way to create jobs, as the process is so capital-intensive.

In his speech Hockey tells us that “shovels will start moving within months”. I’m not sure if he has seen many roads being built from the window of his comcar, but there aren’t many shovels, or jobs, involved in modern road construction.

Per million dollars spent, investment in teachers, nurses and aged-care workers creates nearly 10 times as many jobs as investment in the kinds of infrastructure that the Abbott government prefers. But the need to build roads has nothing to do with job creation and everything to do with population growth. Last year Australia’s population grew by 400,000 people, more than the entire population of Canberra, but like the recent Commission of Audit, the budget was silent on the cost to government of our rapidly expanding population.

The budget speech was silent on a few other macro issues. Perhaps unsurprisingly, climate change has moved from the greatest economic challenge facing Australia to the problem that dare not speak its name. Taking its lead from the Commission of Audit again, the budget speech makes no mention of climate change or the Direct Action scheme, of which the Prime Minister was once so proud.

Similarly, despite Treasury forecasting that the cost of superannuation tax concessions will balloon from $35 billion this year to $50 billion in 2017, there wasn’t a peep out of the Treasurer about the need to make this biggest, and fastest-growing, of spending programs “sustainable”.

Despite all the rhetoric about spreading the pain, business got their tax cut, the miners kept their fuel subsidies and wealthy superannuants hung on to their tax-free income. Meanwhile foreign aid got slashed, the pensioners lose their utilities allowance and the sick get to pay into a medical research fund to help other people get better medicine in the future.

The biggest story in the budget revolves around something the Treasurer didn’t say. While he didn’t declare “mission accomplished”, it’s clear that we can all stand down from high alert. The budget emergency is clearly over. We don’t have to sell the family silver to pay our rent; instead, it seems we can afford to sock away $20 billion into a new health research fund.

The budget papers make clear that Australia has low levels of tax, low levels of public spending and low levels of public sector debt. Having invented a budget crisis, the budget speech was the first real step towards pretending that it’s been solved. But while the government can gradually shift the adjectives it uses to describe the state of our public finances, it will find it a lot harder to shift the upward trend in the unemployment rate.

The economy is slowing, unemployment is rising and the government is cutting spending. Economic history suggests that such cuts make things worse. Coalition ideology suggests it will make things better. One of them is going to be wrong. 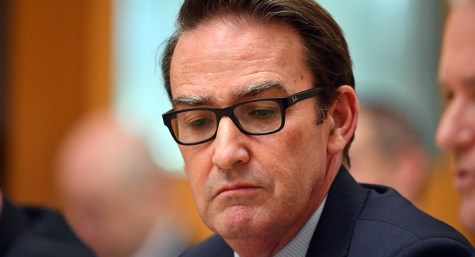 Who led Josh Frydenberg down the path of empathy and rigour in fiscal policy?

When I think of students of history I do not get a mental image of the Coalition.

Roads eh? None of them will be the information superhighway unfortunately.

A government, not with vision, but high-vis vests.

“One of them is going to be wrong.”
It’s all labors fault
/s

The 6 month delay on unemployment benefits will drive down wages in the informal economy. A young unemployed person presently receiving NewStart who gets job, but then loses it because “it didn’t work out” after say only 2 weeks will not be able to return to receiving benefits for 6 months! So what if the young person goes back to the employer and says, just pay me less than the legal wage in cash… you think Fair Work under Abbott will be policing this? I didn’t think so either.

Those old enough may remember the first post-Nov 11 1975 Fraser-Howard budget, of which this is a replay, down to the “short term pain for long term gain” slogan. Its objective was to bring back the 1950’s on the assumption that the Whitlam government was responsible for the economic crisis that engulfed the country. In reality it was external, the collapse of the post war boom which started in the US, from which Australia was temporarily insulated by tariffs and an artificially pegged high dollar. Fraser-Howard 1950’s policies in the late 1970’s were of course ineffective, and we lived through 7 horror years until the election of the Hawke-Keating government which brought 13 years of first-class governance. It’s impossible to know what external realities may arise this time round, but I hope the Senate rejects this 1950’s-style budget at every turn, brings on a DD election and flushes away this mob after seven months instead of seven years.