As we head toward the 2014-15 budget, we've been given a clear view of how the economy is travelling, and the risks of a harsh budget, Bernard Keane and Glenn Dyer write.

A series of economic reports this week have given us a fairly clear, if slightly laggy, understanding of where the economy is at as the government prepares to unveil the 2014-15 budget on Tuesday.

Remember that the official line from the government is that it inherited not merely a fiscal but an economic mess from the government: Treasurer Joe Hockey reduced Treasury and Finance’s pre-election growth forecasts to below-trend — 2.5% growth this financial year and next — as well as downgrading nominal GDP growth forecasts, then claiming the resulting reductions in tax revenue forecasts were Labor’s fault.

It’s clear now that the Hockey’s doom-laden growth predictions will be exceeded: the economy picked up in the second half of 2013, meaning we entered 2014 with growth at 2.8%, according to the December quarter national accounts. The Reserve Bank’s forecast in February (the RBA provides ranges over the longer term) was for growth this year centring on 2.75%, lifting to 3% in 2015. At this point, only a really severe El Nino might disrupt a return to trend growth and above in later 2015. It’s also clear that forecasts made last year about unemployment reaching 6.25% are now very unlikely to be met. Hockey downgraded the unemployment forecast for this year from 6.25% in the Pre-Election Economic and Fiscal Outlook to 6% in the Mid Year Economic and Fiscal Outlook, but left the 6.25% forecast for 2014-15 in place. Today’s April jobs data from the Australian Bureau of Statistics show unemployment steady at 5.8% seasonally adjusted, with just over 14,000 jobs created in the month, all of them full-time. Unemployment appears to have peaked at the end of 2013, consistent with the economy recovering since then.

But remember, this return to near-trend growth is happening while interest rates are still very low, and commodity prices, despite recent falls, are still historically high. It’s also patchy: New South Wales (5.4%) still has a full percentage point less unemployment than Victoria; Victoria, Queensland and South Australia are all around the 6.3-6.4% unemployment level (though South Australia enjoyed a big drop in unemployment in April), while Western Australia is still below 5%. The recovery from 2013 is still underway and being hampered by continuing weak public demand due to state and federal spending cuts and, maybe, by a faster-than-expected slowdown in mining investment. Remember, the RBA’s strategy has been to use low interest rates to return us to the more traditional growth pattern led by consumer demand and housing construction as the mining boom comes off.

On that front, the March building approval figures released earlier this week were mildly disappointing. Approval processes are lumpy and bureaucratic so too much shouldn’t be read into them, but Monday’s figures suggest the strong growth in residential construction we’ve seen over the last 12 months might have peaked — not helped, of course, by the continuing unwillingness of state governments to invest in social housing. On Tuesday, we’ll get housing finance figures for March, which might give us a better indication of how the construction sector is faring.

If that’s a note of caution, yesterday’s retail sales data from March also offer a caveat: a 0.5% rise in trend terms but just 0.1% in seasonally adjusted terms, after strong growth in January (1.1%) and February (0.3%), seasonally adjusted — although the usual suspect, department stores, was the chief culprit in dragging down the figures, which were otherwise positive for food and household goods.

March is when the government, and Hockey in particular, began seriously ramping up its apocalyptic rhetoric on the budget, on top of high-profile news about job losses. If it has had an impact on consumers, then it might have started to emerge in the sales data in March, which also recorded falls in consumer confidence (the two don’t necessarily go hand-in-hand, but seem to have done so that month).

Consumer confidence can be a fragile thing. It’s not necessarily the case that a tough budget will seriously damage — if voters believe that the government knows what its doing. The Rudd government’s ability to underpin consumer confidence in the face of a global financial crisis in 2009 reflected the purpose and determination that Rudd and then-treasurer Wayne Swan showed in how they proposed to respond to it as much as the handouts they dispatched to help stimulate the economy. Joe Hockey might have choked off his best prospect for a faster return to trend growth with his clumsy handling of the budget. 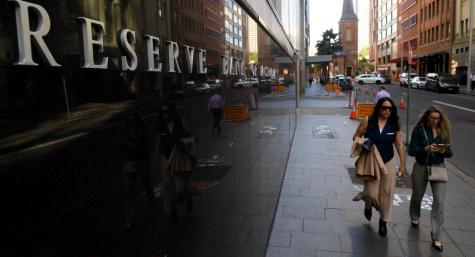 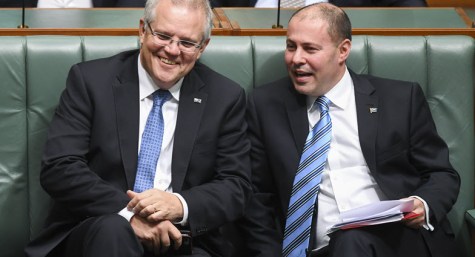 people who voted for abbott and him beleived in his lies, his death riding of our economy all through the rudd and especially the gillard years

sow what you reap and cop it sweet

karma is coming to get you

Just trust us… what a joke coming from a party that leveraged its way into government on the back of a complete trashing of any reserves of trust that existed in the community towards our polity.. die by the sword I say..

…the official line from the government is that it inherited not merely a fiscal but an economic mess from the previous government. World rating agencies gave the previous government a AAA rating score on their economy. Since 2008 only a few other countries were able to match that achievement. Joe Buffoon fiscal and economic management will bring this country into recession before this government term is up. A sweet irony as the BCA and their rent seeker ilk will feel it the most. As for cutting age pensions the government is considering to supplement lower income with food stamps (just like they do in the US). Lower social services and pensions equals less to spend on poker machines and other frivolous old age pursuits like travelling, etc. Less money spent on all kinds of pensions = more money available for those who need it least; in the form of maintaining diesel subsidies for the mining and farm industries; and of course government infrastructure spend to assist private companies. The Australian Sheep that voted for the current Muppets running the country will now reap the diminishing benefits. From watching [even] the conservative media it appears, yes, the sheep are about to be shorn, and the bleating has started.

At least if El Nino hits we all know it will be Rudd/Gillard’s fault – won’t we Joe?

Agree with you completely Jaybuoy, the performance of the entire Abbott opposition did gross damage to public trust in pollies…but the cynicism may work in his favour as people just give up all hope of getting decent treatment from his government.
Labor should be doing a better job of capitalising on the woeful performance of the LNP, and that should include proper planning and open discussion for the necessary structural repairs to revenues, and sheeting home blame properly to Howard and Costello where it really belongs.