The truth is out there: Foundation 51 and its tricky Liberal links

Has the NSW disease spread to the big end of town in the Top End? What are the links between the CLP and the secretive Foundation 51?

Have you or any other elected members of the Country Liberals, their families, de facto or otherwise ever received any funds, favours or inducements, either directly or indirectly, from a company called Foundation 51?

Does Foundation 51 have any links to or is it an associated entity of the Country Liberal Party, and has this company, in any way shape or form, paid for any election campaigns past or present?

Has the interest of Foundation 51 in the Country Liberal Party been declared to appropriate authorities?

Giles squibbed the answer, telling the Assembly that he’d had a good yarn with embattled New South Wales Premier Mike Baird about ICAC and electoral fundraising (surely the last thing on Baird’s small-talk list right now) and then waffled on about how much confidence he had in the processes of the NT Electoral Commission, which oversees Territory and local government elections.

Giles couldn’t bring himself to say the name of the CLP’s “mental and monetary creature,” Foundation 51.

Foundation 51 is a $2 company established in February 2009 by Graeme Lewis, the eminence grise of the CLP, along with chief of staff to then Opposition Leader Terry Mills, James Lantry.

Lantry left Mills’ employment in May 2010 and ended his directorship of Foundation 51 in July that year following a furious falling out with the party.

Back in 2009 Foundation 51’s brochure stated that it was a “subscription-based organisation that provides its Members a service.”

It was launched in March of that year by the NT’s first Chief Minister, Paul Everingham (1977 to 1984) ably assisted by then CBA (now COMMSEC) chief economist Craig James. Foundation 51 membership had two levels. Plain vanilla “Foundation 51” level membership cost a modest $5,500 per year while the privilege of “Platinum 51” you had to cough a hefty $22,000 “including GST, per annum.”

For that you got “commercial research, reports and information gathering … that would enable many business entities to obtain open access to sensitive commercial research material with both economic and taxation advantages.” Market research would be “presented in August by Crosby Textor” (long term CLP pollsters).

In his regular column in the Sunday Territorian of 9 May 2010, CLP fellow-traveller the late Peter Murphy extolled the virtues of the Foundation 51 fundraisers held the week before.

Murphy was under no illusions about the link between the CLP and the Foundation.

“Leaving aside for a moment the fact that Foundation 51 is a mental and monetary creature of the Country Liberal Party, it has been enormously successful in bringing top-flight speakers to the Territory.” Foundation 51, he said, had “made a brave start in both political and financial life.” The one hundred or so followers present were from the “big end of town … crowded into the Skycity [casino’s] International Room” and were regaled by no less than ex-Prime Minister John Howard and “Australia’s richest man” Andrew “Twiggy” Forrest.

Stone made his loyalties plain – business and the Party:

My brand; my badge was the CLP of which I was and remain a loyal flag carrier and spear thrower … For the sake of the Territory we need a CLP Government … thank you for patiently listening to tonight; thank you for your continuing support for Foundation 51 and the architect of this initiative Graeme Lewis.

I encourage you in our continued support for the CLP in a return to Government.

So far so good.

From 2011 onwards little is available publicly about Foundation 51’s activities in the lead up to the NT general election of August 2012 that swept the CLP back to power in the NT.

Alison Anderson’s questions — and a follow-up by fellow Independent Gerry Wood — were dead-batted by Adam Giles.

One small point of distinction between Foundation 51 and other similar entities other jurisdictions is the appointment of magistrate Peter Maley to the Foundation 51 board.

According to ASIC documents, Maley’s appointment was certified as “true and correct” by Graeme Lewis.

Section 201D of the Corporations law, which governs the operations of private companies like Foundation 51, requires that a director only be appointed following his or her written consent.

Consent to act as director

(1) A company contravenes this subsection if a person does not give the company a signed consent to act as a director of the company before being appointed.

(2) The company must keep the consent.

(3) An offence based on subsection (1) or (2) is an offence of strict liability.

The ABC’s Jano Gibson examined the operations of Foundation 51 on local TV last evening. Graeme Lewis told him that “Foundation 51 is simply a supporter of the CLP in political terms as are many other business organisations in the NT and has no financial relationship with the CLP.”

Others may see that relationship differently.

Eli Melky was until last week the CLP’s Deputy Treasurer and is now a member – along with Alison Anderson, Larisa Lee and Francis Kurrupuwu — of the NT branch of Clive Palmer’s Palmer United Party. While still a member of the CLP and in his capacity as deputy treasurer, Melky had asked some apparently awkward questions about the relationship between Foundation 51 and  the CLP.

Melky told the ABC that he’d been warned off Foundation 51 operations as they were none of his business and were confidential.

Elky’s queries apparently caused some considerable angst within the CLP.

Gibson reported last night that Graeme Lewis subsequently wrote to CLP President Ross Connolly on 26 March 2014, telling him that he had concerns about whether or not he should shut Foundation 51 down and that he had:

“Made the Chief Minister [Adam Giles] aware of this probability, much to his concern … he is well disposed to having the Foundation continue its activity, with the wall between the entities currently fixed in place.”

The Northern Myth understands that the Lewis email of 26 March exposes details of the nature of the links between the CLP and Foundation 51 that both would want kept secret and exposes what appears to have been a well-maintained firewall between the two.

The Northern Myth also understands that there is a series of long and intemperate email and text exchanges between various party officials that reveal a culture of long-standing and mutual distrust and dislike.

Hard evidence of links between Foundation 51 and the CLP are hard to find.

Entering the Foundation 51 web address (www.foundation51.com.au) into a browser leads to a blank page with four directory entries, three of which lead to dead ends.

The fourth leads to a page that contains a link that tells you to “Click here to to go back to the Country Liberals Media Section” which when clicked takes you to a CLP page complete with Chief Minister Adam Giles’ smiling face.

This story is breaking wide open on an hourly basis — expect to see and hear a lot more about the CLP and Foundation 51 in the coming days. 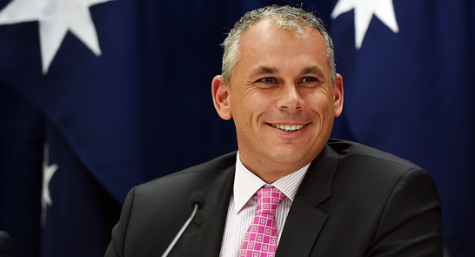