iSentia index: Royals, Direct Action and a premier cut down

NSW politics dominated national news this week, catapulting plenty of NSW politicians into the Index for the first time.

In what would otherwise have been a very quiet Easter week for the iSentia Crikey Political Index, the extraordinary events of exactly one week ago brought a cavalcade of NSW state Liberal politicians into our list, with at least half a dozen of the names in this week’s list probably entirely new to anyone living outside the state –and probably to most living within. For perhaps the first time, the Index had three different leaders across different media. The Prime Minister managed to maintain dominance in print, resigning NSW Premier Barry O’Farrell led TV coverage and incoming Premier Mike Baird led radio and internet news.

O’Farrell’s preferred successor Transport Minister Gladys Berejiklian, saw the numbers weren’t with her and settled for deputy leader. Several senior NSW ministers lost their jobs in Mike Baird’s reshuffle, including former Nationals leader George Souris, Robyn Parker who had a troubled tenure as Environment Minister and Greg Smith, former Deputy Director of Public Prosecutions, who despite coming into parliament with a reputation as a hard-line right winger, lost his job as Attorney-General reportedly because he was seen as “soft on crime”. Is it the case that anyone with real experience of the criminal justice system is too realistic about what works and what doesn’t to be tough enough for talkback?

The only federal politicians getting a boost in coverage were Opposition Leader Bill Shorten spruiking his minor rule changes as some kind of grand rebirth for the ALP, and PUP leader Clive Palmer huffing and puffing about blocking Direct Action legislation in the Senate. At the moment it seems the majority of negotiation with the Palmer United Party will happen via the media, no doubt to the delight of Senate Leader Eric Abetz.

The continued pension rise speculation kept Treasurer Joe Hockey in the top five, although the rapid demise of Barry O’Farrell unsurprisingly received the most interest.

A mightily close-run thing online, with Tony Abbott’s usual massive number of mentions almost pipped by speculation on what else might be going on in the state of NSW.

At times it has seemed like there were more media than punters during the royal tour. An attractive young couple with baby they undoubtedly are, although more of us may be struggling to see their relevance than the media thinks, as evidenced by a much smaller reaction on social media and talkback. 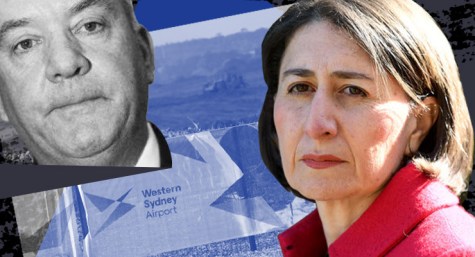