Was MH370 hijacked by terrorists? Taken to China? Found in the ocean? Covered up by the US government? All of the above? Crikey intern Ania Dutka takes a look at what we didn't know and when we didn't know it ...

After yesterday’s Australian discovery of a possible “credible lead” as to missing Malaysia flight MH370’s whereabouts, the media (both social and traditional) finally have a few facts to report. After almost two weeks with no clues, there is a tangible mission, along with treacherous weather conditions and seas to go with it. (Nothing has been found today, yet).

It’s the first real breakthrough in the saga that has gripped the world and garnered hours of media coverage — mostly filled with wild speculation. Guardian commentator Michael Woff has called it the “the new anti-journalism” — the absence of information entities everyone to wild theorising and the media to report these speculations. Here are some of the theories that have emerged so far …

Malaysia flight 370 disappears. The last signal received from the tracking data places the plane somewhere in the corridor of the northern arc (anywhere from northern Thailand to Kazakhstan) to the southern arc (anywhere from Indonesia to the Southern Indian Ocean). There are early reports that the Vietnamese air force has documented large oil slicks consistent with the crash scene at sea.

The release of Interpol data states that two of the passengers were travelling with stolen passports. The passengers were later confirmed to be Iranian nationals. This lays fertile ground for terrorist hijack theories.

Some of the more unusual theories regarding the flight’s disappearance start to emerge. There is speculation that the plane was cloaked with “invisibility technology” or “electronic weaponry”, which allowed it to fly undetected by military and civilian satellite and radar. Much is made of the fact that 20 passengers on board the flight were employees of Freescale Semiconductor, a firm that creates technology for “used in everything from mobile phones to NASA operations”. The obligatory alien and UFO speculation commences as well.

The Chinese Martyrs’ Brigade claims responsibility for commandeering the missing flight — a previously unheard-of group dedicated to publicising grievances of China’s Uigher minority group. On the back of this claim came the theory that the plane landed in the Taklaman Desert, north-west of China.

The group is said to have fabricated responsibility for MH370’s disappearance to escalate ethnic tensions between the Muslim Uighurs and Han Chinese after knife attacks in China that left 29 people dead in early March.

A prominent Iranian lawmaker, Hossein Naghavi Hosseini, blames the United States for the missing flight because he says Washington is determined to engage in “psychological warfare” and “sabotage” the relationship between Iran and south-east Asia.

There are reported investigations into claims that Malaysian jihadists had been planning an attack on a plane. A “supergrass” told police four to five men had planned to use a bomb hidden in a shoe to gain access to the cockpit in a 9/11-style attack. Rupert Murdoch also adds fuel to the fire of claims of terrorist and extremist plots linked with Pakistan …

The map search website Tomnod, a crowdsourcing platform powered by the satellite operator DigitalGlobe, releases pictures of debris allegedly floating on the surface of the Malacca Strait.

Some 3 million internet users have accessed the website to scan 24,000 square kilometres of recent satellite footage. Tomnod asks users tag anything they believe to be MH370. The next day, Courtney Love posts a photo on Twitter, claiming to have solved the mystery …

By now there are 26 countries participating in the search. Reports emerge of plane sightings in the Maldives. Residents report seeing a “low-flying jumbo jet” on the day the flight vanished off radar detection. The Haveeru news website says witnesses saw a plane flying south-west at 6.15am on March 8.

Malayasian opposition leader Anwar Ibrahim tells The South China Morning Post he had seen MH370’s captain, Zaharie Ahmad Shah, at political party meetings. This is developed into a theory linking the Malaysian opposition with the mystery — as it turns out, Shah is related to Ibrahim’s son-in-law.

Images from March 16 provided by DigitalGlobe locate two large objects in the Indian Ocean, 2500 kilometers south-west of Perth, which could be debris from the potential crash site.

The world waits for updates of the Australian Maritime Safety Authority-headed search. Wild theorising online, or at least the media’s coverage of it, might hold off until the only real empirical clues to the mystery so far are either confirmed or denied. Or maybe not … 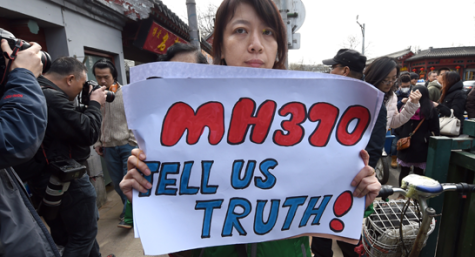 Is this the moment when MH370’s pilots realised all was lost?

Global Voices’ Jeff South had a great roundup of conspiracy theories a few days ago: Malaysia Airlines MH370 Mystery Fuels Conspiracy Theories. One that no one seems to have picked up on was on Facebook: “We need to ask Nick Xenophon (yes – I believe he would be safer than Bill Shorten or even Anthony Albanese – as he is less likely to have been compromised) to investigate the fate of MH370 which I sincerely believe is being held at Woomera.”

The best and most way out theory I’ve heard is that the USA has suppressed technology via ‘black’ funding and part of that is a 3,000 ft flying ‘tube’ powered by free energy which is gravitationally propelled. That is, this ‘ship’ is free of the effects of inertia and can thus exhibit all the traits of a UFO in great speed, changing direction instantaneously and hovering. The theory goes that the Yanks plucked this plane out of the sky in retaliation for something or other the Malaysians did that pissed them off and the proponents of that theory don’t hold any hope out for the occupants. For sheer ‘out there’ theories, this takes the cake.

Speculation, whether “crazy” or not, is usually assisted by an absence of hard information. In the present case it is clear that several governments have been at best economical with the truth, including but not limited to Malaysia and the US.

It is for example, fundamentally nonsensical to claim that satellites, which cover the globe to the nth degree were not able to track its movements. The latest claims from the Australian government about debris in the Indian Ocean are probably sourced to American spy satellites but they are being remarkably coy about it.

There are still huge inconsistencies with what we have been told. If in fact the plane flew off course for a huge distance, as is now being suggested, it beggars belief that the plane’s trajectory would be “lost” given that it was well off known flight traffic patterns. One is lead to the inevitable, albeit temporary conclusion, that we are still being told a version that is at best economical with the truth.

j.oneill, Satellites might be able to track the plane (I’m not sure they can) but they won’t have been looking, and no people will have been working on tracking routine civilian flights. Almost all of Australia’s effort is going into looking for “people smugglers”. Lots of effort is being spent on Ukraine/Crimea; terrorists in Pakistan, Afghanistan, Yemen, Syria, Iran, North Korea, …
Entire ships go missing, and they’re a lot easier to track than aircraft (except that weather can hide them)
The imaging that shows the possible debris is from a commercial satellite.
I haven’t seen evidence of the U.S. being “economical with the truth” on MH370. What makes you say it, apart from the assumption that they must know where it is?

David, Without breaching the Official Secrets Act I can tell you that the spy satellites cover the entire surface of the planet. All the information they gather is stored and can be retrieved to focus on particular areas or events. The purported trajectory of MH370 took it outside the usual commercial routes. That event would have been recorded by the satellites. The reporting of this event has been either remarkably naive or more likely the media have been told to restrict the information they release.

Even the source of the Australian information released yesterday was not revealed although it was almost certainly US spy satellites. As is also well established by now, the Malaysian government has told a variety of stories, many of them completely inconsistent with earlier versions. This is not simply a case of learning more and talking about it. There has been deliberate obfuscation, including releasing the fact that the pilot was a strong supporter of Anwar and two days before the plane “disappeared” the Malaysian supreme court reinstated the blatantly trumped up sodomy conviction. It may or may not be causally linked, but in the Malaysian context it is certainly a material fact.

We are now being fed a variety of theories by the msm such as an onboard fire leading to decompression and loss of consciousness. That is largely BS. It does not accord with the known facts such as the turning off of the transponder and other equipment prior to the plane turning from its original course. That doesn’t happen by chance or the pilot inadvertently pushing the wrong button. Nor does following a flight path designed to avoid military radar and varying the height of the plane. If the plane was on auto pilot (which on present evidence I completely reject) it would not have flown in the pattern it did with unconscious pilots.

There are many other points that could be made, but this is a comment, not an article.

Until there is some concrete evidence I remain sceptical that we are being treated as other than mushrooms; i.e. kept in the dark and fed on BS.