John Ellis fought for 12 years to win compensation for horrific sexual abuse within the Catholic Church. The man who took his brave fight to the High Court framed the issue at the royal commission this morning.

Last month Cardinal George Pell, then archbishop of Sydney, sent out a letter to his flock pointing out that the current ecclesiastical season of Lent required acts of penance. And Pell is taking his own advice. Recently appointed to a position in the Vatican City, one of Pell’s last acts before leaving Australia will be appearing before the Royal Commission into Institutional Responses to Child Sexual Abuse.

The current matter before the royal commission started this morning and is expected to run for two weeks, culminating in the evidence of Pell sometime early next week. It involves the Church’s response to a complaint made by a man called John Ellis and will look closely at the Church’s protocol for handling complaints about abuse, called “Towards Healing”.

Counsel assisting the commission Caroline Spruce said this morning that since the Cardinal had been appointed in 2001, he had overseen 204 claims of sexual abuse received by the Archdiocese of Sydney, although the vast majority of these involved conduct that predated his arrival. A total of 55 ordained priests are named in the complaints, the earliest of which relates to abuse occurring in 1952.

Almost $8 million has been paid out in compensation claims, counsel said, with the highest amount paid under the Towards Healing protocol totalling $795,000.

Ellis’ case is an extraordinary one, and his attempt to sue the Catholic Church went right up to the High Court. As a result of that judgment, Australia is the only country in the common-law world where the Catholic Church cannot be sued, as it has no corporate entity. The court affirmed the law stating that priests aren’t employees, and as a result of that, the Church cannot be held vicariously liable for their acts, as they are in Canada and the United Kingdom.

In his Quarterly Essay on Pell, “The Prince”, David Marr quotes plaintiff lawyer Peter Cashman as saying that he would:

“… rank the Church in ‘group one’ in terms of aggression as a litigious opponent. That puts it alongside the tobacco industry and one rung above breast-implant manufacturers, asbestos companies and doctors.”

This morning, counsel assisting Spruce outlined Ellis’ situation. It’s a sadly familiar tale. Groomed and abused by Father Aiden Duggan when he was a teenage altar boy, the 52-year-old went to build a life as a successful lawyer, becoming a partner in international law firm Baker & McKenzie. When his marriage broke down, however, he went into counselling and confided his abuse for the first time. Soon, his mental health collapsed and he lost his job, becoming unemployed.

A subsequent psychiatric assessment found that in the absence of the sexual abuse, he would have been able to achieve “far better relationships” with the people around him, including his work colleagues.

Ellis started to give evidence this morning, and it is very distressing. Duggan, who has since died from the complications of dementia, befriended the boy, told him he was special, and gave him Iced VoVos and Spicy Fruit Roll biscuits. He offered him night-time Latin lessons, during which he plied him with Scotch whiskey and had full sexual relations with the boy. The priest gave him a book called Special Friendships about boys having relationships in a French boarding school. According to testimony, he said: “It is OK and normal to feel the way we do, I love you.”

In 2002, he approached the Church through the Towards Healing protocol, asking for $750,000 in compensation. What followed was a 12-year nightmare that has indirectly led to Ellis becoming a legal adviser to other victims of clerical abuse. Pell will be questioned closely about his response to Ellis and how the Church has dealt with the matter.

Since it began in September last year, the royal commission has held public hearings into the responses to allegations of physical and sexual abuse by institutions across Australia, from the Salvation Army and Scouts Australia, to government-run children’s homes and the YMCA.

Ellis’ evidence is continuing this morning.

As Catholics around the state abstain from meat and say prayers, their Sydney leader will be heading for the witness box, hopefully explaining where Towards Healing fits into the true meaning of the Christian faith. In his Lenten letter, he exhorts the faithful to give “special attention to someone who is poor, sick, elderly, lonely or overburdened”. Just like John Ellis. 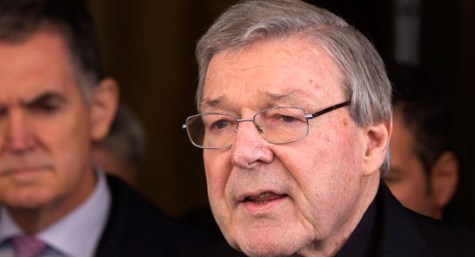 The court’s core finding was that –

‘The relationship between individual office holders in the Roman Catholic Church (such as an assistant parish priest) and the members of that Church as a whole is too slender and diffuse to establish the members’ liability as principals in contract or their vicarious liability in tort.’

The judgment can be found on austlii.

Thank you Gavin. There’s nothing like the input of a well informed comments section.

Whilst I accept that the court knows better than the law I would have hoped that ” if it quacks like a duck and walks like a duck” principle might have applied.

That australia is a the sole nation where the church is so exempted from responsibility is a grave injustice.

We can only hope that the PM recognises this and urgently introduces legislation to close this loophole. After all doesn’t the LNP preach being accountable?

THE PAV: You would like Tony Abbott to close this loophole? You have to be joking! He only goes where the money is.

That the catholic church takes advantage of the ‘unincorporated’ ruling to evade its responsibilities is disgusting, it invalidates the pretence to charitable aims and should disqualify it from tax-deductible status.

If current law is insufficient then new legislation is needed to compel it to admit responsibility and pay compensation. I’ll bet that money/serious risk of losing tax-free status would motivate the church to rediscover its concience.