The 3D printing revolution is coming to your home -- or at least a site near you. On his journey across America, Crikey's writer-at-large visits a backyard Buffalo outfit leading the charge.

Shuffling off to Buffalo ain’t as easy as it once was. Perched on the edge of Lake Erie, at the very western end of New York state, the city was once a centre of industry, advantaged by its position on the water, access to powerful falls to drive mills, and a river to the Atlantic.

The city was where the skyscraper was born, a few years before they began sprouting in Chicago in the 1890s. There’s a few left now, scattered round the centre, art nouveau creations, unoccupied and, before heritage efforts began, slowly crumbling away. Buffalo was once touted as a potential rival to New York City, but the city began declining from the 1950s. Then from the ’70s onwards, the offshoring began, and the entire industrial north-east of the United States was allowed to decline over the next three decades — an act of social and industrial suicide with few parallels in history. Two trains per day connect the city to the wider world; in February when the snow lies thick on the ground, flights can be delayed and cancelled two or three days in a row, and when you get there the taxi system has essentially collapsed.

But it’s in places like Buffalo — places that retain a memory of world leadership and entrepreneurial flair — that serve as a crucible. It’s the same across the world. In the United Kingdom, the new production revolution is occurring in places like Coventry and Loughborough, where what remains of the first industrial revolution still litters the landscape; in Germany it’s Karlsruhe and Darmsdadt, dour, ugly towns dedicated to industry. And so it is to places like Buffalo that you come, to see things that will live in the memory as either an interesting failure, or the next Apple.

“Look, we have a video,” says Scott, manoeuvring between bench tops and machines in the basement workshop beneath the family home in Amherst, a Buffalo exurb. With the neat turnout of an engineer — silver hair, black top and slacks — he’s at one with the piled-high equipment, black screens and 3D printers whirring away, gas welding bottles and portable power supplies. He clears a space, and starts it up, a 20-second vid, a close-up of the machine I’m wedged in front of, a nozzle and a build-bed, a silver stream falling from it, drops of hot metal falling with utter precision tracing a pattern.

It is of itself nothing much, but at the same time something momentous, a demonstration of a molten metal 3D printer, a technology which, if it can be scaled and mass produced, takes the small-scale 3D printer into another realm entirely.

Scott is one half of this basement start-up, which rejoices under the name of Vader Systems, after the family’s French-Canadian surname. Had any push-back from George Lucas? “What could he do?” laughs Scott. For 30 years he was an engineer and then a manager and regional CEO for a trucking company, immersed in the rapid prototyping revolution, as production design became computerised and printerised. But he quit a couple of years ago to support the other half of the start-up — his son Zachary, a 20-something softly spoken kid with the hacker’s moontan, and the efficient vaguely startrekky haircut I will come to recognise as the uniform of the material hacker.

Scott, is focused, efficient and assured, but it’s clear from the start that the company revolves around Zachary’s know-hot. “I did a year of mech engineering,” he says, a backlit logo of “Vader Systems” cut from black hovering eerily behind him, like a deathstar promo, “but then I realised the stuff that was going on was happening too fast to miss.” He clicks through the stuff he tried out, a trail of lateral thinking, following its own logic, curiosity and intellectual challenge, but also on the trail of a saleable product. “I started trying to work out how to get inline skates to do all the things that ice skates could — you know, stop on an angle and turn 180. It was a system of sliding planes within the skate. We got some interest but by then I’d moved onto an affordable gaming computer. I made a few of them, I still use one myself actually.”

“We got onto 3D printing from the next project microgas-turbines,” adds Scott. “But we couldn’t get the metal parts printed, the companies were too backed up. We could have bought one — “for one-and-a-half million,” Zachary interjects — “and that’s what led to thinking if there’s a way to do affordable metal printing.”

3D printing with metal — more properly, “additive manufacturing” — is well established. It has been for 20 years, ever since Carl Deckard, an undergrad at the University of Texas in Austin, developed the process of laser “sintering” in the mid-1980s. A laser, pointed into a bed of metal powder — titanium is one of the most frequently used — effectively interlocks the molecules of the powder together, creating a solid object. It’s not melting or welding, which would leave the object with imperfect joins. Sintering — and other, more advanced processes, which have succeeded it — essentially creates an object with the same strength and regularity as a subtractive process (i.e. as if the finished object had been carved out a single piece). But the technology is industrial in scale and cost, and though it is coming out of patent this year there is no likelihood it will be anything but, anytime soon — a baseline sintering machine costs a half-million dollars. And lasers aren’t easy to maintain or handle.

So there remains a separation between the personal and consumer/maker side of 3D printing — which for the most part employs polymer (i.e. plastic) filament and for the moment constrains it to the manufacture of small and relatively trivial objects — and metal production, which would open a whole new realm of possibility. With a metal printer, affordable by either a local bureau — a material equivalent of a FedEx/Kinko’s style copy-centre — or eventually, in the home, the capacity to produce thousands of parts or objects of increasing complexity for home use becomes possible. Though metal printing is not the only game in town — there’s also a robust research push towards new metal-equivalent materials — it remains the next big thing.

The challenge for metal printing on that scale is that it has to be either a wire-feed system — i.e. a form of pseudo-welding — or use metal powders, which involves a complex multi-stage process in which a thin layer of powder is laid down, then fused, followed by another layer, etc. The potential superiority of molten metal is that it’s a single process, and more precise. But the main problem is the transfer of the metal, which would otherwise adhere to both pipe and distributing head. “Then I was thinking about the inline skates,” says Zachary, “and I realised we could do it electromagnetically.”

And that, dear reader, is why you and I are not inventors. By using a magnetic field, the metal is held in suspension until deposited — it never touches a surface. It’s a brilliant solution — simple, elegant, and using the distinctive nature of the material itself to make it practicable.The Vaders are working in aluminium at the moment as a first, soft and malleable metal, but the process can eventually be transferred to other metals. “We’ll do copper next,” says Scott, “which means you can print electronics and circuits. We’ll be able to lay that on polymer, so you can lay circuits.” Since the process scales down, potentially to the micron level, the eventual possibility would be that you could print out electronics — though that would be a way down the track.

Yet it’s a feature of the 3D printing revolution that everyone starts to leap ahead. While domestic or small bureau metal printing is not imminent, what is close is perhaps even more exciting. The Gigabot set a record for funding on Kickstarter when it was announced, and it began shipping to an extensive list of pre-buyers in late 2013. It’s the largest consumer 3D printer to date, able to print objects of a maximum volume of 60x60x60 centimetres, but capable of working at a precision of 0.1 millimetres, and retailing between US$2000 (for a basic kit) and US$4000 (for a full system).

With a 3D printer of that size one could start to print common household objects as a matter of course, either standardise or aestheticised — although it will also be used for modelling and prototyping by designers, architects, etc. Breaking through the “domestic” barrier is dependent on a widening of the materials available for easy printing, since the polymer filament would be fine for a whole range of basic tools and utensils, but unattractive for anything in more immediate use. However, there’s a range of new materials on the way — before metal arrives, synthetic ceramics and even wood will be available.

Whether people will take this up en-masse remains to be seen — but it is at least possible that such technology would become as much a standard as the home computer became from the ’70s onwards, transitioning rapidly from a hobby kit, via the Apple II and then the PC, to being a standard piece of equipment. Even the more circumspect of the people involved in 3D printing, are becoming relatively more optimistic about the speed and uptake of the technology. The Vaders hope to have a first model of their printer — an industrial-level machine retailing at between $200,000-400,000, still a major reduction on existing prices.

With the taxi system still out — “I can get you a cab in four hours,” says the bored dispatcher — they drive me back to the airport. “We’re hoping to have it on the market in April.” Production costs will be funded from pre-orders, “which are coming in pretty much without us saying … anything”, says Scott with a quiet smile. “People just call us up.”

We pass through the scattered fringes of Buffalo, old redbrick factories. The city has got behind a lot of new startups, as part of a “Buffalo billion” program, a huge wodge of cash given by New York state to regenerate the city. The only trouble is, of course, that if such new technologies live up to their real transformative possibility, they won’t be taking us back to a period of industry and employment, but into a new period entirely, with its own opportunities — and crises.

A revolution in the making — printed out in 3D 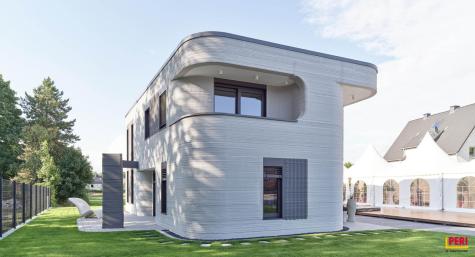