Brace yourself for a Liberal whitewash, from east to west

A fresh poll shows the Liberals on track to win the Tasmanian election in March. Will the Coalition hold every state and federal government from March 15?

Australia is on track for wall-to-wall Liberal governments — in every state and at the federal level — in March, for the first time since 1970.

A poll released today shows the Liberals are likely to wrest power from Labor in Tasmania at the state election on March 15. South Australians go to the polls the same day, and analysts are tipping a change from Labor to the Liberals there too.

That would leave the ACT government (an overgrown territory / town council) as the Australian Labor Party’s feeble last stand. The tide has turned quickly; just six years ago Labor held government federally and in every state.

Before conservatives rejoice too loudly at the possible Liberal whitewash, it’s worth remembering that it doesn’t always help a prime minister if every state is on his or her team, because there’s no one else to blame. And voters can get skittish at such dominance by any party.

To Tasmania, where the besieged Labor minority government of Premier Lara Giddings is limping towards likely defeat. Labor has been in power since 1998 in Tasmania, which invented its own complex Hare-Clark electoral system based on proportional representation in the lower house. This lends itself to minority governments. Four years of governing with the Greens, the slow draining of talent from Labor, a poor state economy and anger in the north about Labor’s actions to restrict forestry have translated into toxic polls for the ALP for some time. Some ALP figures are publicly unloading on their own party.

Today, the Hobart Mercury carries the first publicly available poll of state voting intentions since November, and the first since the election date was named. It was commissioned by the Liberals, taken on January 20 and dropped to the Merc, so it should be taken with a grain of salt. However, it is a fairly respectable ReachTEL poll of almost 2000 people, so it tells us something. The results are up on local psephologist Kevin Bonham’s blog.

The poll shows the Liberals are likely to win 13 or 14 seats in Tasmania’s lower house of 25 members (13 is a majority), while Labor would be cut back to seven or eight, and the Greens might win four. It shows a slight softening in the Liberal vote, while Labor’s woeful vote has picked up a bit. It’s closer than the polls have been for some time, but not that close.

Tasmania has five electorates, which each elect five members (upper house elections are held at a different time). This election will be won or lost in the north (Bass and Braddon are the northern electorates and Lyons is in the centre), where anti-Labor sentiment is much stronger. Here are the ReachTEL results.

Question: at the upcoming state election to be held on the 15th of March, which of the following will receive your first preference vote? If you are undecided to which do you have even a slight leaning?

Dr Bonham told Crikey: “I think the Liberals can win majority government, and they have a very good chance of doing so, but this poll is not as good for them as some of the others, it does cast more doubt.” One point of caution for Will Hodgman’s Liberals, according to Dr Bonham, is that ReachTEL has a record of significantly understating the Labor vote in Tasmania. If the results are just a few points lower in Bass and Franklin, the Liberals could miss out on majority.

In the unlikely but possible event that the Liberals don’t win majority, Tasmanian politics will get very interesting indeed. Hodgman has vowed to govern in majority or not at all. The Liberals may try to poach renegade Labor MP Brenton Best as Speaker, or they could jettison Hodgman and govern with the Greens. Or the Liberals could go it alone and try their luck on the floor of Parliament. Another option is for Labor and the Greens to band together for another term in government. At any rate, the governor would be called away from his duties opening Rotary book fetes in Oatlands to make interesting legal decisions about who should be asked to govern.

A Liberal insider told Crikey the mood within the party was “cautious optimism”. “The campaign is well set and well structured, it’s more the left-field stuff that comes from outside,” he said. “Clive [Palmer] is a real wildcard … Palmer could blow it open for everybody, the only difference is that we know they’re there this time.”

The Palmer United Party is running at the state election and surprised many last year by winning a Tasmanian Senate seat (that of Jacqui Lambie) from the Liberals. The Liberals are worried the PUP and the Nationals could win just enough of the conservative vote to deny the Liberals the quotas they need. On this ReachTEL poll, PUP is unlikely to win a seat, but the party hasn’t started any cashed-up advertising campaign yet. It could win a seat in Franklin or Braddon.

Labor insiders are adamant they will not govern with the Greens. They claim they’re picking up feedback that “it’s going to be closer than people think”. However, some privately say they are sensing strong personal sentiment against Giddings, seen by some as being too young, too female, too Hobart, too Green-friendly and too much like former prime minister Julia Gillard. Giddings has thrown the Greens out of cabinet.

Former independent upper house MP Sue Smith, who is based in the state’s north and is conservative leaning, told Crikey “the first mood is majority”. “We could see a Queensland episode in Tasmania as a whole,” she said, referring to LNP Premier Campbell Newman’s thumping win. Smith says northern voters are worried about jobs and do not want to experiment with government. They want “someone they can blame”.

The current make-up of the Parliament is 10 Liberal, 10 Labor and five Green. This graph shows voting intention as measured by Enterprise Marketing and Research Services (EMRS) since the last election in 2010.

Tasmanian election: Lara is toast, but what about Clive? 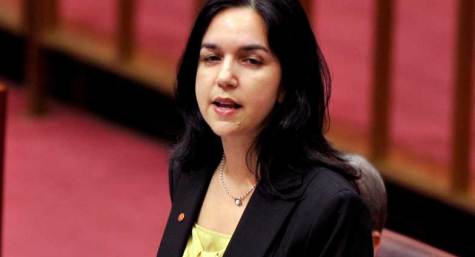 Poll Bludger: the results are in — Tassie’s new senators confirmed

“…some privately say they are sensing strong personal sentiment against Giddings, seen by some as being too young, too female, too Hobart, too Green-friendly and too much like former prime minister Julia Gillard”

Ah well, here in the ACT it looks like we’ll be not only the last Labor stronghold but the only one for which a female leader isn’t electoral suicide…

Speaking as a Liberal supporter, it gives me no comfort to have wall to wall right of centre governments. I believe in the robust contest of ideas and our democracy does best where there are electable choices.

The real tragedy in my view is that it’s not superior coalition activity, vision, policies and leadership ability that is bringing this about but the abject failure of the left, the loss of the Labor party’s soul, the utter short termism of the Rudd / Gillard / Rudd administrations, the rampant corruption in NSW Labor and now the sense of entitlement by Don Farrell that has so damaged Labor’s South Australian campaign.

I look forward to a re-invigorated ALP, something we need. But with a union hack like Shorten in charge, the self destruction goes on.

This has not escaped my notice Malcolm. Not only will all state / fed leaders be Liberals, they’ll be male (and white, and middle-aged). It’s different in the NT and the ACT, as you point out, where Giles is indigenous and Gallagher is female.

Definitely an electoral problem, “being…too female,”.
Future to the back?

As a supporter of right of centre governments David, you should have loved the federal ALP of the last few years.