Blood brothers: the Sydney jihadists who took on Assad

A number of Australian Muslims have gone to Syria to fight against the Assad regime. Freelance Chris Ray, who recently returned from Syria, looks at the tale of two Sydney brothers.

Events in an obscure corner of war-ravaged Syria have raised questions about the roles of two Sydney brothers and Islamic preachers — one living, the other dead — who left their families and jobs in Australia to join the international jihad against the government of President Bashar al-Assad.

Sheikh Fedaa al-Majzoub, a former vice-president of Australia’s National Imams Council, is an activist in the opposition Syrian National Council, a Muslim Brotherhood-dominated organisation based in Turkey. He has been a frequent visitor to rebel-held districts of northern Syria.

The Syrian government last month accused him of being “responsible for” the kidnapping of more than 100 women and children during a rebel massacre of civilians in Latakia province in August 2013. Information Minister Omran al-Zoubi made the allegation at a briefing I attended in Damascus. He offered no evidence beyond alluding to Fedaa al-Majzoub’s alleged use of “Australian telephone networks” during the Latakia offensive.

Fedaa al-Majzoub strongly denied playing any part, telling The Australian: “I heard about it, I know about it, but I was not involved in it at all.” He said the civilian hostages were being held as bargaining chips in a prisoner swap.

Human Rights Watch found that anti-government fighters killed at least 190 civilians and seized over 200 — mostly women and children — as hostages in a “co-ordinated, planned attack on the civilian population” of undefended villages inhabited by members of the minority Alawite sect. Human Rights Watch said the killings and hostage taking constituted “crimes against humanity”.

The attack was launched from Salma, a small, opposition-controlled town in Syria’s northwestern corner near the Turkish border. Fedaa’s younger brother Mustapha was killed there in a rocket attack a year earlier, and Fedaa presided over his funeral.

Saudi Arabia-born Mustapha was president of the Islamic Awareness Association. The Australian reported he was “on the radar of security services as an extremist preacher” but his family and Islamic community spokesmen insisted he had been killed while engaged in unspecified “humanitarian and charity work”.

Suggestions Mustapha was involved in combat were “far fetched”, said Islamic Friendship Association of Australia spokesman Keysar Trad, who added: “A man of the cloth whose mission in life is to bring peace to those around him and attend to their spiritual needs was mercilessly killed by the dying Assad regime.”

Statements and Facebook posts by Mustapha himself and others suggest he was of a more martial disposition.

At a rally in Sydney seven months before he was killed, Mustapha declared: “Words on its [sic] own are not enough — it’s words with sacrifice that brings the results…  Our brothers in Syria will be victorious.” According to Muslimvillage.com, Mustapha’s last post on his Facebook page read:

“One important lesson I learnt where I am is: never judge a person by the greatness of his biceps or the width of his shoulders or the loudness of his voice or his aggressiveness in front of other Muslims or by the hype talk he repeats; rather, judge him by his steadfastness at calamities and on the battlefields. I met brothers here who from the first instance you might think they are too merciful or weak (due to the way they treat other Muslims), however on the battlefields they are lions that roar.”

In an earlier Facebook post he announced: “Allah Akbar Allah Akbar 72 from the shabeeha [loyal alawaite supporters] have just been captured in the Kurd mountain in Latakia. It’s going off everywhere here Allah Akbar.” To which one of his Facebook followers replied: “Have they been slaughtered yet?”

A YouTube video of a memorial service for Mustapha, posted on August 20, 2012, carries this description:

“Sheikh Mustafa Al-Majzoub is one of Australia’s most popular sheikhs, especially with the youth. He went to Syria, his homeland, to take part in the jihad there during the blessed uprising of 2011/12. He was martyred while fighting.”

Al-Zoubi levelled his accusation against Fedaa al-Majzoub while briefing an Australian “solidarity delegation” from the Hands off Syria group and the WikiLeaks Party during their visit to Syria. He met the delegation at the heavily fortified state radio and television compound where suicide attackers detonated two car bombs on October 13 — the most recent of several attacks on media installations in the capital. Speaking through an interpreter, he said al-Qaeda had called on all its cells and networks worldwide to attack Syria:

“Since you are from Australia I would like to tell you that the jihadist sheik Fedaa al-Islam al-Majzoub is responsible for the kidnapping of 106 people, and unfortunately he was using Australian telephone networks. The worst of this is that the Australian government is well aware of this. But it has turned a blind eye and done nothing about it. This man is now present in Europe and working in Europe, and none of the European governments have done anything about it.”

In Australia there was speculation the Syrian authorities were attempting to smear Fedaa al-Majzoub, the only Australian member of the Syrian National Council, in order to damage his standing at the Geneva peace talks, scheduled to start on January 22. However, the SNC has pulled out of the talks. And the man who will likely head the al-Assad government’s negotiating team at Geneva, Deputy Foreign Minister Faisal Muqdad, made no mention of Fedaa al-Majzoub when I questioned him about Australians entering Syria to fight.Muqdad, who spoke in English, said his government was defending the only secular state in the Middle East against terrorism financed and armed mainly from Saudi Arabia and also from “certain extremist groups in Australia that take care of fighters”.

Asked to comment on the Australian Federal Police’s recent arrests of two Sydney men over an alleged attempt to travel to Syria to join the fighting, he said: “I’m really happy that understanding has started to take place, but those governments who claim that this was not very clear from the beginning are big liars. They knew from the beginning who was financing these terrorists.”

Muqdad’s briefing was interrupted by phone calls he said were related to negotiations over the seizure of his family home by “armed men from Jabat Al Nusra” in Deraa province the day before. He said his family had abandoned the house after a previous attack when his father and nephew were kidnapped and tortured. “The one with whom my villagers were negotiating yesterday was a Jordanian, not a Syrian, so you can understand the dimensions of the challenges we are facing.”

Prime Minister Wael al-Halqi was the third Syrian leader to raise the issue of Australian jihadists while meeting the Australian delegation. He said Syria’s National Security Office had verified names of Australian fighters who had entered Syria. “Off the top of my head I know one of them was killed in Aleppo countryside. Another one, his name is Yusuf, and he was nicknamed Abu Walid. He was killed in Hama countryside.”

Human Rights Watch found that at least 20 distinct armed opposition groups participated in the August 2013 Latakia attacks. It named five groups from the more rabid end of the Islamist spectrum and not known to be associated with Fedaa al-Majzoub’s Syrian National Council, as “among the principal planners, fundraisers, and executors of the offensive”. HRW added that the extent of other groups’ involvement in massacres and hostage taking was unclear, though the “Free Syrian Army” boasted of taking part in the operation.

While media reports often link the “moderate” Free Syrian Army to the Syrian National Council, the FSA is best viewed as a catch-all term for armed groups that receive Western aid and endorsement rather than a unified organisation with a command structure.

In Latakia city on Christmas Eve I asked the mayor, Ahmed Abdul Kader, what he knew of the fate of the civilian hostages. He said 116 villagers were missing, mostly women and children, and the Red Crescent was serving as intermediary in negotiating their release with two groups, Jabhat al-Nusra and ISIS (Islamic State of Iraq and the Levant). “We have proof that they are alive. They are taking these people with them as they move around, but most of the time they are in Turkey,” he said.

Jabhat al-Nusrah is the al-Qaeda-linked group that released video of a Brisbane man described as Australia’s first suicide bomber, who blew himself up in an attack on a Syrian army checkpoint in September 2013.

ASIO has named Syria as the “primary destination” for Australians fighting abroad, and Australian intelligence sources estimated that between 150 and 200 Australian citizens have left to fight in Syria. 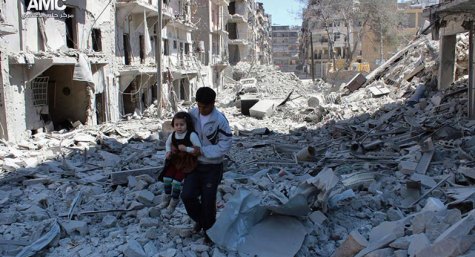 Three things you don’t understand about the Syrian war

Pay no attention to the disgraceful Keysar Trad. A NSW supreme court judge ruled that he was disgraceful – see http://skepticlawyer.com.au/2009/08/03/no-tell-us-what-you-really-think/ The judge said “those views are not acceptable to the general Australian community and I am satisfied that a person who holds them and, more particularly who encourages others to share those views, may be described as a disgraceful individual.”

I hope that any Australian shown to be fighting in Syria has their passport revoked. Islamic extremists have no place being in Australia.

Interesting how the SMH periodically lauds Oz born young men of generationally Oz born jewish families who go to Israel to serve two years in the IDF. Does A/G Brandis propose making their military involvement illegal and grounds for citizenship revocation as he suggested re the Syrian jihadis?

James if Islamic extremists have no place being in Australia, why would you revoke their passports? Then they would be stuck in Australia – let them leave!

As an Australian of Syrian Descent, I am disgusted to see these Australian men (Often with no-Syrian background) going to Syria. For everyone (All MSM) who have defended their jihad in Syria as that of “Humanitarian Aid” – please advise their humanitiarian credentials….What charity work did they do in Australia? Was their charity extended to anyone outside of their community or only those who share their belief system. My relatives (that are still in Syria) are suffering greatly because of these terrorists who are committing unheard of atrocities against indigenous Syrians (including some of the worlds first Christian communities). Australia, wake up, these people have no more allegiance to Australia as they do to Syria – there only allegiance is to their extremist interpretation of Islam. Wake up Australia.