Rupert’s Xmas gifts. OK. Who sent a book on how to use Jesus to lose weight to Rupert for Christmas? He does not look very impressed … 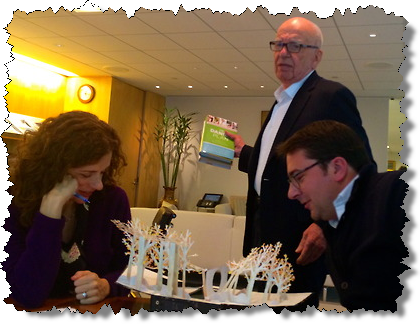 This pic is from Rupert’s official Tumblr. Posted yesterday, the caption is: “But now we are just inspecting interesting christmas gifts sent to Rupert. This one has a very impressive wrapping situation going on.” The book he’s clasping is called The Daniel Plan, and here’s the blurb:

“During an afternoon of baptizing over 800 people, Pastor Rick Warren realized it was time for change. He told his congregation he needed to lose weight and asked if anyone wanted to join him. He thought maybe 200 people would sign up, instead he witnessed a movement unfold as 15,000 people lost over 260,000 pounds in the first year. With assistance from medical and fitness experts, Pastor Rick and thousands of people began a journey to transform their lives. Welcome to The Daniel Plan.”

Compulsory Christmas fun. Our good friend “the Townsville Magpie” has unleashed to us this about this party in the central Queensland town of Charters Towers.

“Staff in all sorts of organisations look forward to the annual Christmas party thrown by the boss, right? And if you don’t actually feel like attending the knees-up for a variety of reasons, you don’t have to, do you, right? Well, wrong actually, if you work for the Charters Towers Regional Council.

“In what appears to be an extraordinary bit of grim payback about as far from goodwill as that shown the local bat population, CTRC staff have received an email ‘ordering’ them to attend the council Christmas party, whether they want to or not. Doesn’t sound quite legal, actually, but it appears the council reckons the staff are still being paid when they stage the party at the local showground on Friday [today] from 12.30 to 3pm. Then you find out there will be NO ALCOHOL allowed, and it’s not clear if there’ll be enough shade cover if the expected couple of hundred turn up. Top temp tomorrow in The Towers is predicted to be somewhere in the high 30s. Amazingly grinch-ish, which has plenty of staff offside. Bigtime.

“The ‘Pie is told that the background is that the more traditional hootenanny last year, at night with staff on their own time, was anything but dry. In fact, it is understood that several well-oiled staff decided as the night progressed to give the Mayor Frank Beveridge a free character reading and informal performance assessment, delivered in blunt if slightly slurred basic Anglo-Saxon. That didn’t go down too well, and looks like  the mayor put the idea to council who apparently voted in favour of tea and bickies instead of beer and bravado.

“It is now clear why staff were ‘ordered’ to attend, otherwise there might be a lot of soggy corned-beef-and-pickle sambos left over. The ‘Pie is just wondering if some may be pissed off enough at this very stingy arrangement to throw caution to the wind and let Mayor Beveridge (note the irony of the name) know what they think of his catering and event arrangement skills.”

Yes — pity the poor staff at this council, forced to attend their Christmas function on the boss’ time. We offered council the right of reply, and spokesman Mark Crawley pounced. “It’s a change from what we’ve done in the past, basically it’s an opportunity for staff to come together in a bit of camaraderie and celebrate the 12 months that’s just passed,” he said. Crawley said with the function on work time and staff driving there, it wasn’t appropriate to serve alcohol — but the 200-odd attendees would get a free sandwich or a burger and a soft drink. Staff on RDOs or leave were not required to attend, he pointed out, and yes — there are two buildings, so there should be enough shade.

Well! Is our Magpie making a fuss about nothing? You be the judge.

Minister struggles to keep staff? This from a mole:

“Which female minister in the NSW government seems to have real issues keeping her staff? Her chief-of-staff and media adviser have recently left for greener pastures. Does she have a reputation for not listening to others and for forgetting critical briefings?”

We think we know to whom our little birdie is alluding …

Tinkler grounded. Billionaire Lang Walker has picked up Nathan Tinkler’s old chopper, a 2011 eight-seat twin-engined Agusta, for a song, paying just $US3.25 million. Tinkler bought the helicopter new for $US5 million two years ago, but the former billionaire’s wealth has fallen spectacularly since then. GE, owed $12 million, called in receivers FTI Consulting just over a year ago to sell off both the chopper and Tinkler’s private jet, a Dassault 900C he bought for $16 million, both owned by Tinkler’s private company TGHA Aviation. The receivers grounded both aircraft, but Tinkler ignored direct instructions and flew the jet to Singapore anyway. The receivers had to send pilots there to fly the plane back. In a tough market, it has taken them a year — and heavy price reductions — to sell both aircraft. An unidentified US buyer has bought the jet for $US10 million. Interestingly, the jet was originally owned by Lang Walker, who is worth $2 billion, according to the BRW Rich List. It is understood the sale proceeds almost, but not quite, clear the debt plus accumulated interest owed to GE. Other Tinkler assets, including his last substantial mining interest, Aston Metals, and numerous prestige properties, remain on the market.

Christmas in Darwin. While cleaning out the Crikey bunker yesterday we found this treasure of a daybill from one of Crikey’s fave papers from a previous year. Just one question. Was the pun deliberate? 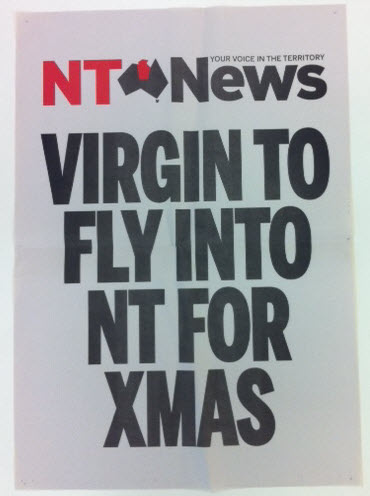 But did they win? Speaking of old media clippings, we’re grateful to former Labor staffer @mrseankelly for tweeting this pic of the much-missed Bulletin in 2006. Rudd and Gillard did win — but then they really did lose. Not many pundits would have predicted the toxic turn this partnership would take. 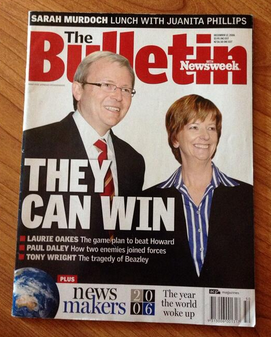 Memo to all our Crikey tipsters. You’re cheeky conspiracy theorists, you’re a whole lot of trouble — and we love it. Ms Tips has received thousands of emails from readers this year. Some have been bang on the money and have led to great stories. Some have been duds. Some have been hilarious. In following up readers’ emails, Ms Tips has been yelled at, told off and lectured — usually when the tip is correct and the target wants it kept quiet. (It can be an extreme job — Ms Tips has contacted everyone from John Farnham to a dog for comment this year.)

To everyone who has emailed us a tip in 2013, thank you for being the eyes and ears of Crikey, and keep up the detective work in 2014. Tips would be nothing without you. Oh, and have a merry Christmas while you’re at it.

Thank you Ms Tips. Yours is my favourite column in all of Crikeyland.