Remembering Ronald Biggs, criminal, prison escapee, temporary Australian and man of the world. A reporter who covered his legal case in Barbados looks back on the infamous journey. 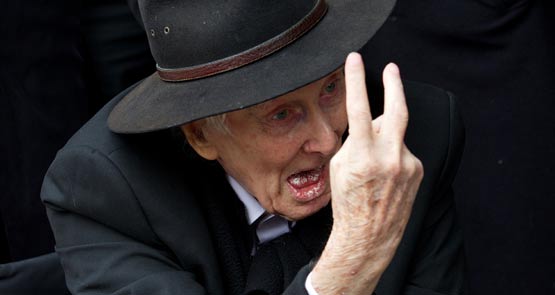 There we were, sitting in a crowded room of a two-storey stone building dating back to when Bridgetown, Barbados, was a buccaneer and slaving settlement. Convicted Great Train Robber, escapee, Australian and Brazilian resident and Sex Pistols associate Ronald Biggs (pictured, earlier this year) was sitting, handcuffed but smiling and happily relaxed in the dock, his theatrical local barrister resplendent in a tunic with red leg stripes, arguing his case.

That was April 1981. The air was soft, the water clear and, they say, the spliff was excellent.

Biggs had been recently kidnapped from Brazil by English bounty hunter mercenaries. Their boat had mechanical problems and they were rescued off Barbados, bringing into question the legal status of their involuntary shipmate.

I was a 25-year-old reporter, sent to cover the trial by a significant Australian newspaper, by way of inducement to leave El Salvador’s horrible and increasingly personalised civil war. Biggs was eminently sociable and ensured that he made eye contact with the media scrum on the benches. In the first stage of post-traumatic stress disorder, I nodded back.

Much of Bridgetown had been built by the British in the 17th century, after expelling the Spanish and Portuguese who had been there some 200 years previously. Apart from an airport, a requisite Hilton Hotel and reggae, there was a sense that little had changed.

Biggs was by far the biggest thing that had happened to Barbados in a very long time. There were British tourists, jetting in and out. But it was otherwise “dreadlock holiday”.

The British media was there, Biggs’ criminal notoriety having been given a further boost by his musically questionable appearance with remnant Sex Pistols on their video The Great Rock ‘n’ Roll Swindle. For a person who could not legally work in Brazil, he had traded socially for years on his reputation as a famous criminal, receiving small gifts from visitors to attend his Rio barbecues.

Ronald Biggs was one of the Great Train Robbers, who hoisted an estimated 2.6 million pounds (a significant fortune now) from the Glasgow-to-London mail train in 1963. Though no one was killed, the train driver, Jack Mills, was beaten so severely his injuries ended his working life.

Of the 13 convicted participants in the crime, Biggs was a minor player. However, the trial itself was a media sensation, and Biggs gained notoriety by getting over the walls of Wandsworth Prison in 1965 and escaping with his wife, Charmian, and two sons to Brussels, Paris and then Australia.

Biggs arrived in Sydney in 1966 and soon moved to Glenelg, in Adelaide, where he was joined by his wife and sons. The following year, and with a new child, they moved to Melbourne.

In 1969, it had become increasingly obvious that the infamous Ronald Biggs was in Melbourne. He was all across the local news. So he fled by ship to Panama, and then to Brazil where, by fathering a Brazilian child, he fought off extradition appeals by the UK government.

While living in Rio, Biggs became a local celebrity. One could buy T-shirts and coffee cups with his image. The remnant Sex Pistols teamed up for a quick punk recording of No One Is Innocent and Belsen Was A Gas, which made #7 on the UK charts.

In 1981, Biggs was kidnapped by ex-UK soldiers. But Barbados, small, only independent since 1966 and without many legal structures, had no extradition treaty with the UK. Biggs was returned to Brazil.

Biggs dragged out the rest of his minor celebrity with other punk bands and generous tourists, but chose to return to the UK in 2001. He was immediately returned to prison, but sought release on the basis of poor health. He was released in 2009, having served a third of his original sentence.

Biggs’ health continued to be poor, and he suffered a series of strokes. Free from prison, he said he just wanted to see Christmas of 2009.