Just shut up with your stupid protests against lingerie football, poor old Snoop Dogg and the liberation of brown women from their oppressors. Your protests are worse than ineffective; they're actually making things worse. Stop.

Once, genuinely stupid protest was the domain of the Right. Ultra-conservatives outshot their soft-centrist foes by 10 to one with demands to shut down mosques and universities lest they manufacture thought and worship. But this year, Left and Right met between the trenches to perform a synchronised Culture War Dance that might be distressing were it not quite so poorly performed.

10. The Protest Against the Telecast of Lingerie Football

Led by Collective Shout, an organisation founded by Melinda Tankard Reist and whose stated aim is to end “sexploitation” (its covert goal is to make up silly words), this campaign began life as a petition and ended it in some of the worst op-ed of the year. “Don’t pretend this is a victory for women’s sport“, said Fairfax to its over-worked strawman.

No one was “pretending” that a game played by comely young women in brief outfits was a victory. But victory — and its close cousin “empowerment” — is the goal of the game of this kind of thinking, which fixates on meaningless battles. If we erase all evidence of sexism — and no reasonable person could argue that the league was anything but sexist — then we have “won”. Won the battle, that is, against seeing evidence of sexism as it is practised by the working class; not the war.

All we have “won” is the right already enshrined to show revulsion for bad taste; to despise the page-three girl while paying homage to her “makeup-free” sister; to cover female genitals from view except when they belong to undergraduates of Australia’s most storied university; to stop women in hotpants from playing gridiron for money on TV while applauding the hotpants of the amateur Roller Derby league.

We have won the right to continue the work of the Christian Temperance Ladies, who are, it must be noted, responsible in this nation for women’s suffrage but also our next contender.

9. The Petition for Pimp Prevention 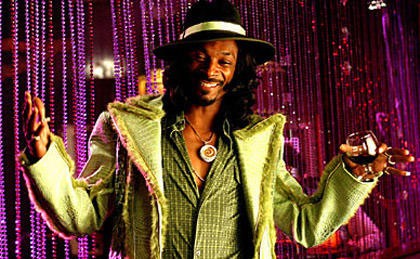 Another shout-out to Collective Shout for believing in Scott Morrison.

Working hard to prevent the objectification and enhance the Melindafication of women, the organisation has a campaign active to revoke the Australian visa of Snoop Lion, ne Dogg. In Howard’s term, Kevin Andrews told Macquarie Radio that the artist didn’t seem “like the sort of bloke we want in this country”. This tidy summary of Coalition immigration policy was upheld with a visa denial that is mentioned favourably by the ladies in their correspondence to Morrison; worth a read just for a whiff of the smelling salts needed to reproduce phrases like “suck dick” and “Break a Bitch ‘til the Day I Die”.

Our need to “quarantine” ourselves from harmful materials has a long history in Australia that begins just before Federation (with the seizure of Zola’s works from a Melbourne book vendor on the grounds that “French literary vice” could harm the minds of children) and continues to the present. Concern about video games, paintings and all of the internet abounds here as it does in no other Western liberal democracy.

Maybe it’s an itch of repression that leads us to protest. Maybe the nation’s ego battles with its superego to right the wrongs done by its own vice from 1788. Maybe we’re just so stupid that we believe entirely in the causal influence of a man in a purple hat who is viewed as a “real” “role model” by his ageing fans just as much as I believe that I am Franklin in Grand Theft Auto.

As transplant patients will concur, organ harvesting is a medical marvel. Presumably, this car owner in the leafy Sydney suburb of Enfield has more of a problem with the unethical collection of tissue than the miraculous practice per se. Whatever the case, we can say that this message — heartfelt as it may be — will be as lost on the world as it is to myself and the citizen journalist who snapped it, Dee Madigan.

An advertising creative and Gruen Transfer regular, Madigan was struck by the almost-touching impotence of the gesture. “LOL,” I replied when she passed on the image. “LOL,” she returned, by which I am positive she must have meant “awareness and its expression has become a virus”. For which the body politic will probably need a transplant.

The consciousness-raising of the liberal-Left still has a way to go before it can claim to throw crazy-shade on those who would give us over to Biblical Law. Sure, between protesting kids’ clothing in discount chain stores and unsuitable lavatories, progressives have become about as peculiar as Pentecostals. But there remains, thanks to Jim Wallace and Co, some wiggle-room.

All interest groups will misapply data to further their ends, but the ACL took the prize for statistical fallacy when it announced that smoking was healthier than same-sex marriage. The ACL lobbies to prevent access to abortion and advertising campaigns that contain the word “boobs“. It also campaigned against Channel 7’s Sunrise. But even a broken wristwatch is right twice a day.

The ACL opposes a lot, but it is definitely pro-Christian. It is currently calling for the end of the persecution of Christians in Syria. Syria is a country where everyone without a good-sized gun is being persecuted. What happened to “love one another as I have loved you”?

When the Pharisees saw the Lord Christ eateth with publicans and sinners, the disciples must have said, “Don’t worry, Jim. By 2013, everyone will have forgotten about this bit of Matthew 9:11-12”. Justice is not for all. As we find in our next awardees:

6. Liberating Brown Women From Their Oppressors

So-called “feminist” action on Afghanistan seems to have got a second wind in Australia. While it might in one reading seem perfectly reasonable to champion the rights of women and girls — as it did to academic and feist writer Jenna Price, who championed Afghan Women’s rights in her Twitter bio for a spell — in another, it just seems a bit mean.

From what we hear, Afghanistan is no picnic for anyone without the Warlord Level 5 Achievement Badge. With Afghanistan’s economy as monstrously ravaged as its souls by decades of invasion, it seems just picky to focus on the fortunes of one gender. It is true that the Taliban is not going to make Feminist Ally of the Decade any time soon. But it is also true that these are a people brought to their knees by forces who do not discriminate when it comes to slow or instant death.

Petitions to the UN and twit comments by the shadow treasurer about the plight of Afghan women serve no cause nobler than to justify the “liberation” of the Near East to Western Democracy. Shut up and fix the sanitation. We’ll talk about the patriarchy when people aren’t drinking their own poo.

5. Gay Rights Magazine Makes The Pontiff Person of the Year

Seriously. What? We’re giving out awards for people who manage not to vomit on homosexuals now? Let’s make Clive Palmer Disability Spokesmodel of the Decade because he has not yet said “The NDIS is a bag of shit” yet, shall we? There are several excellent diagnoses of the illness that besets Fairfax. My lay assessment is Narcissistic Personality Disorder. An absorption with the self can only lead to abandonment by others. But not before you go about taking extreme and conflicting positions such as Julia Must Go to Critics of the Julia Must Go Editorial Are The Ones Who Are Really At Fault to Julia She Was Awesome Go and See Her Talk To One of Our Columnists.

Editorial consistency is vital to brand survival in a time of information affluence, but all Fairfax gives us is a poor echo of the outrage-and-protest cycle; e.g. this terrible piece by Geoffrey Barker followed less than two days later with another terrible piece on why Geoffrey Barker is terrible. Protest and extreme position might drive social media but it does not drive loyal readers to your brand.

3. This Petition on Change.org A lady of the sort inclined to use the strange term “rape culture” was innocently fighting the ravages of age when she saw Evidence of Misogyny. “Let the cat-calling commence” were the words of a junior copywriter that launched an online protest.

“All we want is lotion from a company that endorses our right to feel safe and confident in public space,” said the petition. There are 2000 people in the world who believe in a lotion that can cure the seventh sign of ageing, which is, of course, misogyny.

2. This Petition “Rejecting” the Abbott Government

Guys. Seriously. I’m all for opposing the idea that liberal democracy is not Fukuyama’s beautiful End of History, but maybe you could try voting next time.

1. And the stupidest protest of the year goes to the Australian federal election.

Really the only explanation for Andrew Bolt's remarkable (quantity, not quality) output is that he's a big ol' android.

Helen Razer shares a long car ride with an Australian journalist who's not afraid to step on the toes of more than a few in the American media.

Not normally a card-carrying Razor fan. But this piece is spot on. Happy Christmas, Helen!

Cheer up Helen. Your pin up girl (sorry, woman) Sophie Mirabella is back on the public pay role.Yaaaay…..

How can anyone in The Razer Gang argue with No 1!

Number five – I’d missed that (though, to be honest, I’d missed misogynistmoisturizergate too)- did they not read the fine print? – did they not think it through? Are they a subsidiary of Time now? – just, as you put it, – what???

Dear Helen,
China favours the use of the death sentence over imprisonment for (alleged) crimes so that the organs of the executed prisoner can be used (that is, sold on the black market) for transplant.

Given that you are such a fan of the death penalty, ignorance about what you’re mocking, and other right-wing-populist causes, perhaps you would consider campaigning for Craig Kelly’s re-election next time around? (http://hoydenabouttown.com/20131218.15603/time-to-end-the-valorisation-of-ignorance/) I’m sure the two of you would click.