How a Tasmanian data project could save the world

New Australian-made sensor technology could have the potential to maximise food production around the world.

It’s the challenge: getting food enough for 9 billion people, from less land and water, and in a hotter climate. The World Bank is excited about the potential of a Tasmanian trial, dubbed the Sense-T project, to help farmers boost productivity by installing a network of solar-powered, wireless sensors providing real-time, open data on micro-climate variables like temperature, humidity and soil moisture.

Information from the Australian-made sensors — typically, some 35 above-ground and 15 below-ground sensors will suffice to cover 130 hectares — will be analysed using big data technology pioneered by Sydney-based SIRCA, originally the Securities Institute Research Centre of Asia-Pacific.

SIRCA is an Australian success story that manages the world’s biggest repository of financial data, taking in 2 million pieces of data per second from 300 stock exchanges globally. SIRCA sells data to major financial traders and the likes of Thomson Reuters, and funnels the revenue back into research.

Now SIRCA and Sense-T — a $43 million partnership between the University of Tasmania, CSIRO, the Tasmanian government and IBM — are looking at applying the big data technology to agriculture, eHealth and logistics.

In agriculture, SIRCA’s data analysis techniques could help farmers combine detailed historical, spatial and real-time data from their own property with Bureau of Meteorology and other data to not only improve crop yields, but also manage disease, prepare for frost, and verify provenance — increasingly important to marketing produce. The network of sensors also has applications in bushfire prevention and aquaculture such as oyster farming.

Sense-T director Ros Harvey (pictured below) says the breakthrough comes from the sensors made by Melbourne firm Grey Innovation, which can be installed at a tenth of the cost of previous technology. She is coy about the cost to farmers but says older technology used as a comparator on a viticulture crop cost about $50,000 to obtain triangulated data from three weather stations. 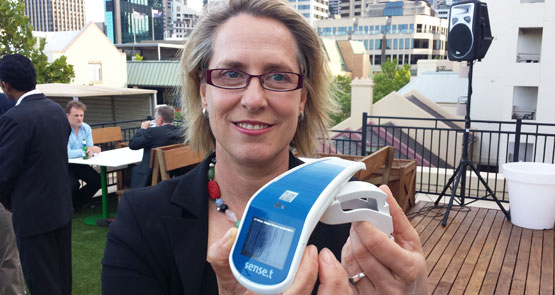 “I can’t tell you [about costs] because we’re in an alpha trial now and we’re just working through the business model. We’ve not only reduced the cost but increased the number of sensor points we can collect data from,” says Harvey. “We’re providing very fine micro-climate information and doing it at a price point that is very affordable.”

Harvey says a key to the trial is making sure the technology is not “a solution looking for a problem”, by working with the end-users in development. “Farmers are incredibly innovative in their own right, but we’re working with the farming community, and they’re driving what we’re doing, and they’re saying we need this technology in order to be able to do our jobs better and to grow more food and better technology food, so you get the benefit of demonstrating provenance and achieving brand equity through provenance.”

Jan Davis, CEO of the Tasmanian Farmers and Graziers Association, is on the Sense-T advisory board and says while it is early days there is huge potential.

In a northern Tasmanian trial, which TFGA is supporting, local data is used to replace modelling that was transported by regulators from the Murray-Darling basin.  But the modelling, linked to water licensing was often inappropriate: in the Murray Darling basin the problem is not enough water, in Tassie the problem is often too much.

“They’ve been managing our water licenses based on information that’s not relevant, issuing ‘cease to take’ notices on licence holders in the middle of the time when they most need it,” Davis said. With Sense-T, the aim is to link licence conditions to actual water flow.

Davis says the economics can stack up for farmers: “Lots of farmers are already paying a lot of money for data in various shapes and forms. This is an opportunity to get more data that makes their analysis a lot more flexible, for their own business. If you can get data that saves you twice as much on your fertiliser, or twice as much on not running your irrigator, then it’s a no brainer as an investment.”

Harvey says the because the data is all coming together in a single repository, the same sensors could be also be used to control run-off and reduce fire risk, and in environmental reporting. “We can bring the power of big data to communities so you can re-purpose data and create value out of it in ways we haven’t even thought of.”

“We can use real-time data to help us do more with less, and that’s what the planet desperately needs,” he said. “We’re going from 7 billion people to 9 billion people. We’ve got no more arable land, we’re facing unprecedented climate change and a third of the world’s population lives on less than two bucks a day. Something has to give.”

Vein, who was formerly deputy chief technology officer for US President Barack Obama, is also on the Sense-T board and sees it as part of his job to find new development models, to “travel around world and find those solutions … those pilot projects that could actually disrupt the whole development process [and] really help countries leapfrog over traditional impediments to development in ways that were not heard of even thought of last year or certainly a decade ago”.

“I believe the opportunity for real-time data, real-time decision-making, real time impact, real-time measurement and evaluation will not only change the face of development as we know it today, but also will change how governments operate.

“Sense-T is an example of exactly the kind of projects the World Bank needs to embed, whether in the water sector, the agriculture sector, the transportation sector, the health sector, it’s all about do-learn-do: start small, iteratively develop, co-create solutions, then worry about policy and law and regulation.”

As a small business owner and manufacturer I am frustrated by the public sector using taxpayer funds – $43m – to design and build what is already being built by any number of private sector companies.

As a Crikey subscriber, I am astonished to see a blatant PR piece being reprinted in your bulletin as “news”. That’s what I go to my local newspaper for. For goodness’ sake, this is the kind of stuff you rail at constantly – the republication of a press release without any independent journalistic review. I’m sure Ros Harvey is coy about costs of her “new” system given the hugely inflated costs she quotes ($50k for three triangulated weather stations? Really!?).

My small company will continue to deliver to our customers systems which collect soil moisture and climate data which is delivered in real time to the internet, to be used by farmers to drive their irrigation decisions, disease management decisions, crop spraying decisions.

Crikey, if you want to be an advertising outlet state clearly that that is your intention and then print articles such as this.

Except it’s not $43 million of taxpayer funds, it’s a $43 million partnership involving a large number of government and industry partners contributing both cash and in-kind.

Benny. OK, I have a vested interest, but $43 million of largely government funding with one (IBM) private sector partner. Don’t you think there is a problem with the public sector simply replicating what the private sector has already done? I’d love to see public sector IP commercialised, but not if it results in the production of copycat products.

I agree Joe, sounds like a presser from the Sense T people and not a real story at all. Paddy Manning’s stuff is usually better than this.

How dissapointing to be reading advertorials in Crikey. If writers don’t have the time or expertise to critique this company/consortium PR material please don’t publish it. You are both potentialy misleading readers and wasting their time.